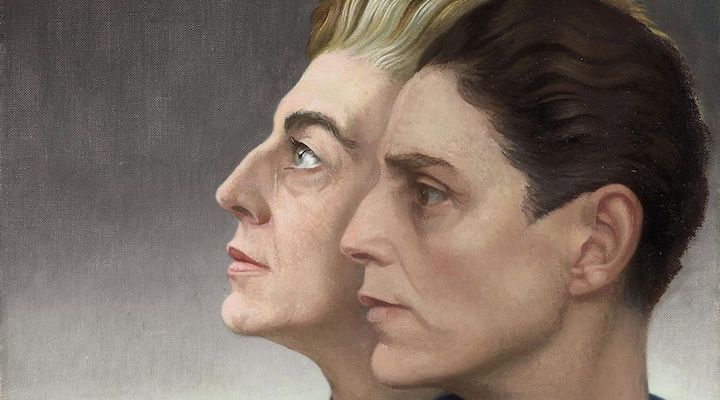 The first was a major retrospective on the enigmatic artist of the early 20th century. The gallery chose to continue with Gluck’s favoured way of mounting her paintings, in a frame which rose from the wall in three tiers to create the feel of paintings as architecture.

Her work often featured masculine women or figures which blended masculine and feminine. It should come as no surprise that her most famous work ‘Medallion’ (or YouWe) was used as the cover for an edition of iconic sapphic text The Well of Loneliness.

Though Gluck aligned herself with no particular school her paintings showcase everything from floral still lifes (usually lilies) to symbolism and expressionism.

Whilst not a particularly large exhibition the room spanned plenty of Gluck’s styles, enhanced with large bouquets of Madonna lilies to create a multi-sensory experience.

A personal highlight was Phoebe Boswell’s project in pencil. Based on Tinder messages her work matched intimately captured drawings with technology rendered in pencil. Based on James Baldwin’s Strangers in the Village, her work sparked many a conversation on racism, fetishisation and sexual politics.

One floor up we had a glance through the forgotten women of modern British painting. The space featured the Cubism of Wilhelmina Barns-Graham and the sculpture of Gertrude Hermes. Included were some well-known figures: Vanessa Bell (sister of Virginia Woolf) and Dora Carrington.

The true jewel of the evening was the hidden room tucked up a winding wooden staircase. Usually used for business meetings, the room currently curates the lithographs of Ethel Gabain. Blending androgynous figures her work is often dark, humorous, melancholic, sensual – often at the same time. Her prints rely on playing between space and detail: highly elaborate wallpaper melting into a shaded floor, or rich fashion against a bare background.

Based in an unassuming unit in Bond Street, the Fine Art Society’s current features are well worth a visit and are sure to suit all kinds of art fans.