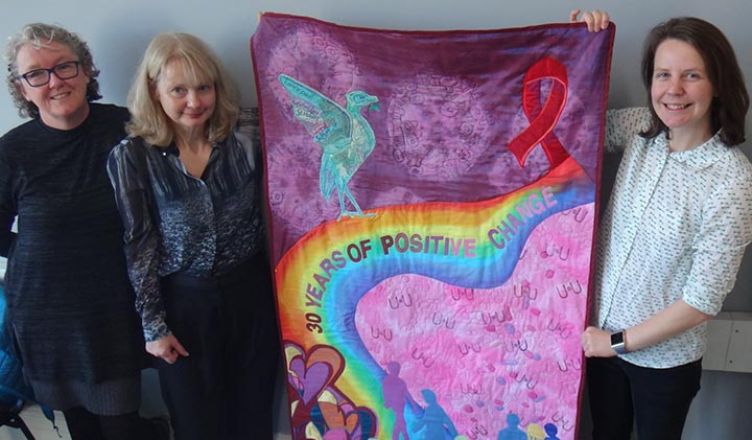 World AIDS Day takes place annually on 1 December. To celebrate this huge milestone, Homotopia’s 2018 theme is ‘I Will Survive’.

The UK AIDS Memorial Quilt tells the story of those lost in the 1980s and 1990s to the early HIV/AIDS epidemic. Similar quilts exist in other countries. Local artist Liz Sherbourne has been commissioned to create the new panel.

The quilt represents approximately almost 400 people from all around the UK and each of the panels tells a story. In total there are 48 panels measuring 4m sq apiece, each comprising up to 8 smaller panels. Every panel has been made by the loved ones of people lost to HIV and AIDS.

Among the commemorations are those for the writer Bruce Chatwin; the artist/film maker Derek Jarman; the actors Ian Charleson and Denham Elliot; gay rights activist Mark Ashton; and the photographer Robert Mapplethorpe.

The quilt panel will be displayed on Saturday 24 November at the screening of the documentary After 82 at the Museum of Liverpool, Pier Head. It will then be displayed at St George’s Hall Liverpool on Saturday 1 December, where it will be shown as part of Sahir House’s World AIDS Day Vigil in the Concert Room.Supported by Homotopia, the vigil will feature speeches, poetry and moments of remembrance.

The panel will join seven other panels produced in Merseyside, before being admitted into the UK AIDS Memorial Quilt catalogue. The quilt panel features the words ’30 Years of Positive Change’; a liver bird whose wings carry the names of Liverpool, Knowsley, St Helens, Wirral and Sefton – areas supported by Sahir House; and a red ribbon, symbolising HIV awareness.

Homotopia Festival Guest Curator Cheryl Martin explains, ‘I wanted Homotopia Festival to be a part of World AIDS Day.  When we learned about the plans Sahir House had to restore, bring together, and display the North West panels of the UK Names Project, sometimes known as the UK AIDS Quilt, I wanted to commission a panel to show how far we’ve come in terms of living with HIV since the 1980s.

‘I was a reporter in the 1980s and I covered the AIDS crisis. Now with 30 years of positive change later, people living with HIV can be healthy and live to be 100. I would never have imagined that three decades ago. The new panel is beautiful and vivid, with a powerful message. We can’t think Liz enough for her stunning interpretation of our vision.’

World AIDS Day is an opportunity for people worldwide to unite in the fight against HIV. Founded in 1988, World AIDS Day was the first ever global health day and today celebrates the lives of the millions lost to HIV. Cities around the world hold vigils to mark the event with a minute’s silence.

Artist Liz Sherbourne says, ‘It has been a real privilege to work with Homotopia and Sahir House to create the new quilt panel, which is now a part of an archive that is both powerful and poignant. Positive change is represented by the rainbow road leading directly to the World AIDS Day Red Ribbon.

‘The panel features three main figures, inspired directly from the Now and Then oral history project which saw Merseyside people affected by HIV share their stories from the past three decades. The hearts are a direct reference to the 1992 Love and Passion campaign (designed by Andrew Dineley) to celebrate changing attitudes to HIV. I’ve incorporated a lot of powerful messages in the quilt which are all still very relevant to the movement.’

Serena Cavanagh is Health Promotion Lead at Sahir House. She adds, ‘It is great that Homotopia chose to support and recognise the UK AIDS Memorial Quilt project by commissioning a new panel which carries on the legacy. This year’s 30th World AIDS Day campaign shows how far we have come and strengthens the message of hope and activism.’

A selection of panels from the UK AIDS Memorial Quilt project will be on display in venues across Liverpool, for more information visit aidsquiltuk.org/liverpool.