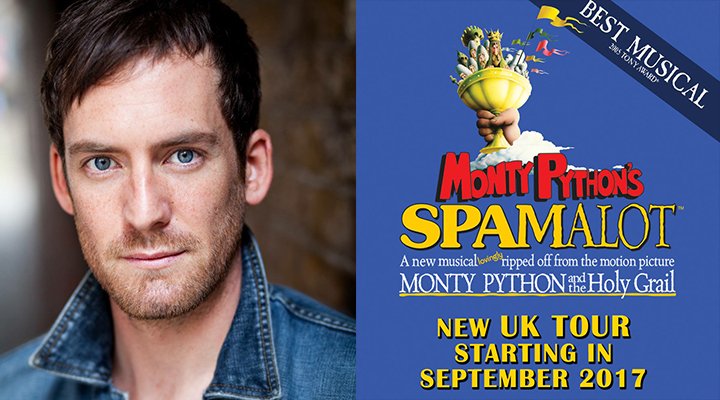 As the critically acclaimed musical Spamalot hits Manchester on the latest leg of its UK tour, we caught up with Johnathan Tweedie, who plays comic hero Sir Lancelot.

I have always been a massive fan of the work of Monty Python – and particularly Monty Python and the Holy Grail -from a very young age, having watched it with my father. John Cleese and his specific set of characters always appealed to me the most and I knew the French Taunter scene off by heart as a kid. So when the opportunity arose to play this role in such a brilliantly conceived version of Spamalot, I couldn’t resist. The collection of characters that come with playing Lancelot are all so diverse and daft that it’s a very rewarding show to perform professionally. So I guess it ticks all the boxes!

How do you feel Spamalot keeps Monty Python relevant to modern audiences?

We reference a vast array of contemporary culture from politics, pop culture and especially musical theatre. I think the team have worked very hard at inserting relevant and recognisable references that most audiences really enjoy – things as diverse as Trump, Game of Thrones, reality TV and a great number of musicals.

The added element of improvisation in specific moments certainly keeps the material fresh on a nightly basis and changes from city to city. But at its core, the work of Monty Python is pretty timeless – it’s broad, ridiculous and subversive comedy where cross-dressing is not only presumed but expected.

Do you feel that you and Sir Lancelot share any particular character traits?

When we first meet Lance, he sings this about himself:

“My name is Lancelot,
I’m big and strong and hot.
Occasionally I do
some things that I should not”

I’d definitely relate to the second sentence! Oh, and he likes to dance – although I tend to do it with a few more clothes on than he does!

What do you feel the relationship between Lancelot and Herbert can provoke audiences to reflect on?

The genius of Python was how subversive it was. You’re sat watching something hilarious and utterly ridiculous that you’re so busy laughing, you let down your guard and realise that something like two men celebrating their wedding in front of you is really no big deal.

The massive cheer Herbert and Lance get in response to what is quite a direct statement on LGBTQ rights in the finale has been overwhelming. I’d like to think we disarm even the most hardened of people with laughter and hopefully allow them to open their hearts to a little more love.

And let’s be honest, who doesn’t love a gay disco dance number between a knight and a hunky damsel in distress?

What message do you hope audiences take away from the show?

What really gets me at the end of the show is how utterly joyous people are. I’ve seen people wiping away tears of laughter, dancing and singing but most of all coming together in a sense of unified happiness. Times are hard at the moment in so many ways and I truly believe that if we find the space to laugh with each other every day then everything seems that little bit brighter.

Spamalot shows us to laugh at the world and at ourselves – the show really does leave people with massive smiles on their faces and the feedback on social media has been wonderful in that respect.

Spamalot is currently touring the UK, with tickets available from ATG Tickets.