You were mostly made famous to a mainstream British audience because of your popular appearance in Shortbus. Has this brought a new kind of attention or a new kind of audience to your work?

I was happy to do Shortbus because I’d been working as half of a relatively successful double act called Kiki and Herb, and John Cameron Mitchell allowed me to ‘play myself’ in the film. That gave me the opportunity to introduce myself to a larger audience in a way I was more comfortable with, just when I was getting ready to leave Kiki behind.

You are one of only a handful of trans performers actually portraying trans characters in TV and film and on stage at the moment. Is this something you would like to see increase, or do you think that cisgender actors can accurately portray the issues associated with being trans as effectively without the need for personal experience (e.g., Chloe Sevigny playing Mia in Hit and Miss or  Felicity Huffman in Transamerica)?

I’m not particularly interested in acting because I don’t like the boring, naturalistic style most film work requires and I don’t like being trapped into repetition which is the problem with theatre

Trans actors are certainly just as talented as cisgender actors.

I think it would be great if more transgender actors were cast in every kind of role – not just trans roles. If that were the case they would have the opportunity to hone their craft as much as cisgender actors do and it would help level the playing field.

Unfortunately, we live in a world where trans artists are not given the same opportunities cisgender actors are so, experientially, they remain at a disadvantage which has nothing to do with talent.

But mainly, it’s a business. Hence, the important trans roles often go to ‘name’ actors who have had more of an opportunity to develop a following and are therefore able to generate investors and ad revenue.  Hopefully that will change given time.

Leelah Alcorn has recently made the headlines in even the mainstream media. TIME Magazine said we’re at the trans tipping point. Do you think we’re on the cusp of winning some big advances for the trans part of the LGBT community? Why do you think this is?

I think it’s because diverse, courageous and tireless generations of transpeople have been laying their lives on the line for the past half century and even further back than that.

Social media has sped up the process, but it’s still not moving fast enough or beautiful children like Leelah Alcorn would not still be dying due to familial abuse.

Say we’re at the tipping point. Okay, great, here we are. Leelah Alcorn is dead and to be trans is a capital offense in many countries. Obviously, there’s still a very long way to go.

You are coming to Manchester for a series of shows around Valentine’s Day about love – what are your thoughts on love? In your memoir, you write about your queer relationship with another boy at school. That really stood out for me, as I think lots of young LGBT people will have similar experiences. Do you think that kind of childhood yearning – looking for mirrors for our own queerness – has any effect on our relationships when we become adults?

Honestly, romantic love is so personal I hate to categorise it or analyse it in terms of queerness. Yes, I wish I’d been able to express my romantic longings and desires more openly when I was an adolescent. Yes, keeping it all pent up inside probably twisted me in some permanent heart-breaking way.

As an adult I can say that I’ve been fortunate enough to have been in love with some wonderful people. However, it’s the bad relationships that are fun to talk about onstage! So … in the words of Nico in the Velvet Underground, ‘I’ll Be Your Mirror!’

Some would argue that trans women, in particular, are overtly sexualised in the media and in cultural representations. Do you agree? Why do you think this is?

Oh no, I don’t think I’m sexualised enough! But that’s just me … Bring it on! It’s time to start overtly sexualising brittle, middle-aged white transwomen! We can handle it. Trust.

Lots of discussions are constantly taking place over language, with RuPaul being attacked for using the term ‘she-mail’ in RuPaul’s Drag Race and Azealia Banks for calling Perez Hilton a ‘faggot’. Which side of this debate do you fall on?

RELATED ARTICLE  Why we are excited to play Fragments of Him

I’m against banning words. As a performance artist words are tools in my paintbox and I reserve the right to pull any word out of it at any time. Just be aware that when you do you’ll be held responsible for what you say.

There’s nothing wrong with being a faggot but I don’t think Azealia Banks meant it as a compliment. Now she’s being held responsible.

Let’s face it, her career started its descent when she said that sooo … bye-bye, hon! We liked that one video you made a few years ago before we found out you were an asshole!

But I hate to see the language police attacking people who are comfortable with certain words in order to incite shame-based change by humiliating people within our own community just because they’ve decided that certain terms are offensive this year.

Either way, it spurs conversation and that’s a good thing as long as the conversation doesn’t remain in academic circles where elitist rhetoric, whether intentionally or not, oftentimes only serves to isolate and dehumanize more disenfranchised members of the community.

A conversation that comes up from time to time with LGB, trans, and cis hetero friends is use of the word ‘tr*nny’ – you did mention this on your own Facebook at the time. What is your take on it? How do you think other trans people have responded to the debate and do you think it’s moved on at all?

One major lesson I learned during the ‘tr*nny wars’ is from the people who likened the use of the ‘T’ word to the ‘N’ word. I found this comparison to be offensive because the ‘N’ word was created by the white oppressor and I’m still fairly certain the ‘T’ word started out between girlfriends.

However, it was explained to me that for trans-women of colour, when they are within more traditional communities of colour, the use of the ‘N’ word is much less hurtful than the ‘T’ word, which is used in an incredibly hostile way that is far more painful, dehumanising, and potentially violent for them than the ‘N’ word.

RELATED ARTICLE  A harrowing glance at the rise in transgender deaths

Living in my neighborhood, I would never have thought of that because that’s not a context within which I have much experience. I’m grateful that my girlfriends of colour were patient enough to share that with me in such a way that I was able to hear and comprehend where they were coming from.

Our radical politics need to be infused with more radical love.

So basically I’ve stopped using the word tr*nny when I’m not with my girlfriends in private having a kiki. Personally, I still don’t find it to be offensive, but I don’t want to accidentally trigger anyone or to mistakenly give permission to some dumb-ass who overhears me using it playfully to co-opt that word, so I now refrain from using it in public. The last thing I would want to do is unintentionally hurt anybody’s feelings.

Alongside the international ‘Love is Crazy’ tour, have you got any big works coming up that we should be aware of?

I’m going to have an exhibition of my visual art at The Vitrine Gallery in London in May which I’m very excited about.

Do you ever get bored of being held as the example of non-binary artistry done right, or do you enjoy being able to be an icon for the genderqueer community?

Ha! I don’t really think about it except when I’m asked questions like this. You know, the cat has to be fed, the songs have to be sung. The unmentionables have to be hand-washed and hung to dry overnight in the hotel room before the next gig.

Finally, what is the best part of your job?

More than anything I love the feelings I get while singing beautiful songs with talented musicians. I love the sense of freedom I get when I’m wearing a glamorous outfit. I’m sometimes overwhelmed by how fortunate that I am to be able to make a living doing what I love.  Then the cat starts crying for food and the reverie is over. Meow!  Gotta go! 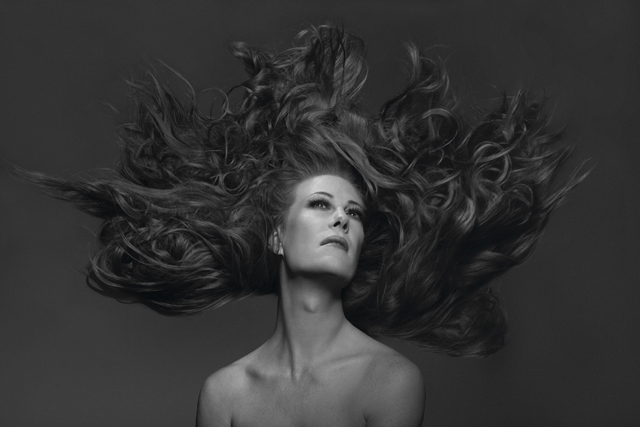 You can also watch Justin Vivian Bond in Shortbus, followed by a Q&A with JVB and Dr. Andrew Moor (MMU), on Sun 15 Feb, 1pm. (Read more)

John Preston shares his picks of the seven best songs for the week, including CXLOE, ELIO, Daddy Squad and Dita Von Teese, Arca and Sia, Millie Turner, Hatchie, and Mitski.