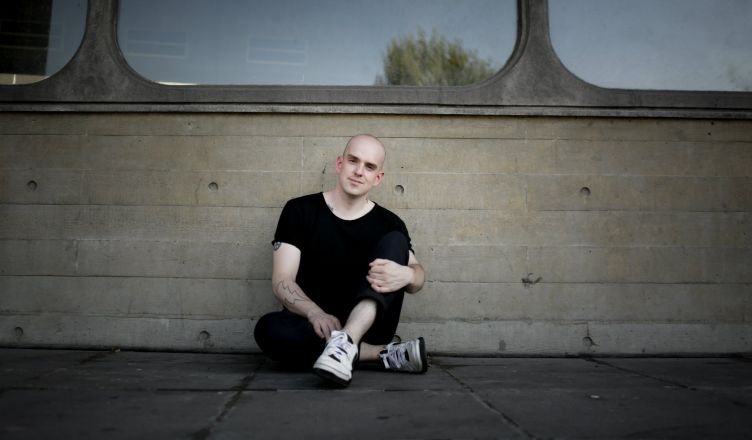 Andrew McMillan attempts to bring order to a chaotic few years for himself, those around him, and society as a whole. Speaking to Vada Magazine about his latest poetry collection, pandemonium, McMillan says that he hopes this book will help to provide a language for the abstract demons in our lives.

Maybe the closest thing to a state of pandemonium for Andrew McMillan on the day of our interview is the yoghurt he has managed to spill down his all-black look prior to our meeting.

“It’s mango,” he tells me of the stains, as we sit down in a booth inside the Ducie Street Warehouse in Manchester, on a rather hot day earlier this month.

We subsequently spend ten minutes attempting to scan the table’s QR code, and another 10 minutes trying to break into the WiFi. But any sweat that was broken in this battle with technology is quickly rewarded with gin and tonics, and air conditioning.

I’m meeting McMillan to discuss his third poetry collection, pandemonium. The first two, physical and playtime, were no strangers to accolades. playtime was awarded the Polari Prize, and his debut collection physical won the Fenton Aldeburgh First Collection Prize, an Eric Gregory Award and a Northern Writers’ award.

So when I received an early copy of his latest book, McMillan sent me a message to warn me that this one might not be like the two that have come before it. “It’s a lot,” he remarked. And he wasn’t wrong.

“I think there’s two things,” McMillan replies when I ask him what he meant by that text. “If you come to it having read the first two collections, it’s a lot, lot darker. There’s a lot less fun in it. It also asks a lot more from the reader, I think.

“I guess in terms of the weight in what it’s trying to talk about, it feels like there’s a lot more on the line in terms of subject matter.

“The first book, when I look back at it, feels very general. It’s about the men, and men as an idea.

“The second one is much more exposing, but only of me. Whereas this is not the same proposition, because it’s exposing of other people, in addition to me.”

It’s interesting that he should bring up the notion of pandemonium being exposing of other people, because it was what struck me the most whilst reading it. What’s more, McMillan had told me when I’d interviewed him previously about playtime that he didn’t feel comfortable writing about other people’s lives, and more specifically his partner’s life.

McMillan says he remembers saying that. So it does seem like somewhat of a change for him, given that one of the poems in this collection is about his partner’s battle with depression, his suicide attempt, and how that impacted on their physical and emotional relationship.

Was he, I wonder, nervous about bringing his partner’s life into this collection.”Terrified,” he says, almost cutting me off. “I still am.

“To begin with, the poems were a way of surviving day by day, and dealing with what was happening. That’s how I’ve always dealt with things. Because of the profile I have within poetry, you know that these poems are going to get read, so then you have a responsibility to the person who they’re about.”

McMillan tells me that he showed his partner the poem and was open to him making edits and removing details.

“That was really important to me, so that they felt like an equal partner in the process. I never wanted it to feel exploitative. I wanted it to feel tender and loving, and ultimately helpful, in order to give a language to that abstract thing.”

The fact that McMillan is exploring the subject of mental health from the perspective of the partner of someone who is going through a mental health crisis, also feels original.

“I think that for me I was really interested in writing about that side of someone’s journey with mental health,” says McMillan.

“My mental health hadn’t been great in the past, and then it had been fine, and now it’s not great again, so I knew that side very well. It was more thinking about what it’s like to both live beside and try to support somebody who is going through things like that. And explore what that looks like, and what that might mean.”

RELATED ARTICLE  Watch: Can you pray the gay away?

McMillan also sensitively explores the grief and pain that descended upon his family after the stillbirth of his sister’s son, George. Something which McMillan describes as “this sadness uninvited unwelcome” in a poem dedicated to him.

“I think the ethics of that are so important when it’s no longer my life, and it’s other people’s lives. They should have a say about whether or not they’re written about,” says McMillan of writing about this chapter of his family’s history. He tells me that he gave the poem to his sister and her husband, and asked for their permission for it to be included in the collection.

McMillan shares that on the day he was given the devastating news, he was teaching on a residential course. The phone call from his father, McMillan thought, was to announce the birth of his nephew.

“And instead he called to tell me that he had been stillborn. It was the shock of it. The sudden shock of it, and the sudden intrusion of that. I felt it so deeply.”

Going back to something McMillan said earlier in our interview about his own mental health, I wonder how writing about so much pain is impacting on him.

“It feels weird,” he says. “You have an immense responsibility just to get it right, especially for the people who I’m writing about.”

McMillan explains that he is living with anxiety. It peaked when he was studying at university, having lived with an eating disorder during his teens. His anxiety lay dormant for several years, but he has now restarted attending counselling sessions; lockdown, he shares, has been challenging for him.

“I’m such a convert, I think everyone should have therapy,” McMillan says of his experience in counselling. He currently pays for his therapy, something which he acknowledges as privilege, when compared to the six-month waiting list for talking therapy on the NHS.

“It feels criminal that there isn’t more in place for people living with mental health conditions.”

Something that he has been able to explore in therapy has been “small revelations” relating to how his experiences as a gay young person relate to his mental health today.

“I wake up and I feel really clenched, and focused on whatever bad thing that the anxiety is telling you is going to happen,” he shares with me.

“Then I’m fixated on that thing for the whole day, and then the anxiety moves on to something else the next day. My therapist asked me, was that how it felt at school when you didn’t want people to find out that you were gay? And, of course, it was just like that.

“For the first few years at school you had this thing inside you that you desperately didn’t want people to know, and you had that feeling that you had to make it through to the end of the day without them finding it out.”

For someone who is so gifted in their ability to express complex emotions and ideas through poetry, perhaps some readers might be surprised to hear that McMillan didn’t always want to be a poet.

Despite growing up in a house filled with poetry books (his father, Ian McMillan, is also a poet), he initially thought of becoming an actor, then a politician, then a speech writer. But the poetry books won, and alongside his work as a poet, McMillan also lectures full-time at the Manchester Writing School, part of Manchester Metropolitan University.

“I love it,” McMillan says of his job, inspiring the next generation of writers, poets and creatives. “For me, teaching has been a way of trying to show students new, contemporary poetry and how to develop their ideas. You learn from how they view the world, and the way they want to write. It just constantly makes you better, because what you ask of a student, you have to ask of yourself too.”

McMillan says that he will be doing readings from pandemonium, but fewer than he has done for his previous collections. “I think this book is a lot to ask of an audience. I think I’ll need to be very careful what I chose to read in front of them.”

As for what he’s looking forward to in the future? “I’ve been thinking more recently that I want to rediscover joy. This book is so dark and it’s been a bleak few years, so maybe I want to write a book that’s quite sexy and fun.”

pandemonium by Andrew McMillan is published by Jonathan Cape, and is now available for purchase.