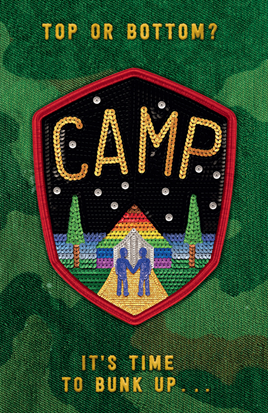 A lot can be said about the turning of traditional stories into LGBTQ+ tales, but an example of where it has been done right is Camp by L. C. Rosen. Set at an inclusive LGBTQ+ summer camp, our protagonist, Randell, is usually known for being effeminate theatre gay Randy who enjoys glittery nail polish and performing at the final show at the end of the summer. He has had a crush on Hudson for years and vows to make him his boyfriend by butching it up and pretending to be Del, a straighter acting version of himself, to woo him. Antics ensue. Camp is like petrichor – you can smell what’s going to happen but you love it possibly even more for the down-to-Earth nature, the sweetness, and the slight thrill of anticipation.

By the end of the first chapter of Camp, there were two distinct thoughts present. The first was ‘good lord this is a queer version of You (the Netflix show about a stalker who tries to win the girl) except he has more friends’ and at a first glance that instinct isn’t entirely misplaced. After being in love with him for literally years, Randy decides to take drastic action and change everything about himself from his body shape, style, voice, gait, likes, activities – everything – based on observed behaviour from the previous years’ camps and the information he could find on Hudson’s dating profiles. Stalking to the max and very reminiscent of Milk in RuPaul’s Drag Race All Stars 3: “Some people say, I’m like, psycho, but I would say I’m, like, really passionate about love”.

RELATED ARTICLE  Anthony Cotton and our contempt for camp

The second thought was about the supporting cast, a point that gets all meta later in the story as it’s commented on that the entire camp is aware and pretending to Hudson and “no one likes being a background extra in someone else’s show”. If this was made into a film, you would expect every supporting cast member to clamour for every single inch of screen time. Add to that the close friends of the main couple – George, who is essentially Jakeyonce and living his best camp theatrical life, but is also very sexually liberated and open to discuss it; Ashleigh, the stereotypical stagehand lesbian, which is switched up when she discusses being demisexual later in the story; and, Brad, the dozy jock best friend to Hudson, who pushes the story forward quite well by really being into George and not caring about the whole masc/femme thing. This leads to a very interesting dynamic where you almost have an ensemble cast. Almost, but not quite, as although there are very interesting discussions especially about more niche areas of the LGBTQ+ spectrum like aro/ace and non-binary folks, they have a moment of discussion and then are put away again, to focus on the main love interest.

The diversity of Camp is very well played, if a little forced in places. While the use of a non-binary character as the lead to round out how the main show, Bye Bye Birdie, would play out should rules of gender and sexual orientation be yeeted (thrown out of the window, for those not familiar with the term, usually with more force) is to be admired in an industry that doesn’t often allow for those discussions to take place, it could be argued that the references to Charity being asexual and aromantic are forced to allow for the inclusion of dialogue for ace/aro folks. Her ‘I fill in the time I would otherwise spend on thoughts of partnered activity with sewing and crafting’ feels a little disingenuous, downplays those activities for people who genuinely enjoy them, and the point could have been made more simply by her dialogue with Del, where she says she doesn’t get involved in other people’s relationships, and a quick reference to her being ace/aro. The whole ‘I kissed another girl to get a guy to stop bothering me’ from the straight lifeguard is also a bit of a cringe moment, but that’s made up for by Ashleigh leaving her old crush on her behind for a new flame.

RELATED ARTICLE  True Blood to the End – I Found You

Storytelling-wise, there is so much beauty and depth included. It’s refreshing to see a character with, what is essentially the age-old story of a masc4masc guy enforcing gender stereotypes due to shame pushed on him, such a powerful back history that includes references to race and culture combined with the different levels of support that LGBTQ+ youth are often on the receiving end of. It is truly moving and powerful, and I dare you not to love the way that this plays out because, frankly, I got to the last third and raced through it like a Buffy two-part season finale. Add to that the discussions on sexual activity, slut-shaming, safe sex, LGBTQ+ history, and gender expression, and you have a masterpiece novel that is accessible to at any age and any level of experience with LGBTQ+ people.

As part of the critiques for Camp, there have been a lot of analogies about how Camp comes across, so I present mine: take the judging panel from RuPaul’s Drag Race UK, blend them up and spit out a novel and that is what Camp truly is. You have the camp theatrical aspects of Alan Carr, the smut of Graham Norton, the blurred lines of gender and conservatism of RuPaul, and the loving support of a parental figure in Michelle Visage.

Camp is a well-known narrative thread retold with modern experiences on sexuality and gender, but fuck me gently with a chainsaw does it do a number on you emotionally. As LGBTQ+ people we know these characters, we know this truth, we know the world we live in, and good Goddess do I wish I grew up with the level of freedom that Randy, George, Ashleigh, Hudson and Brad have, even if it is one month a year.

I only ask the author that when he makes a sequel to Camp to please do so when they’re all old enough to go into detail about the sex scenes, kthxbye.

Camp is available to pre-order on Amazon now and is due to be released 28 May 2020.