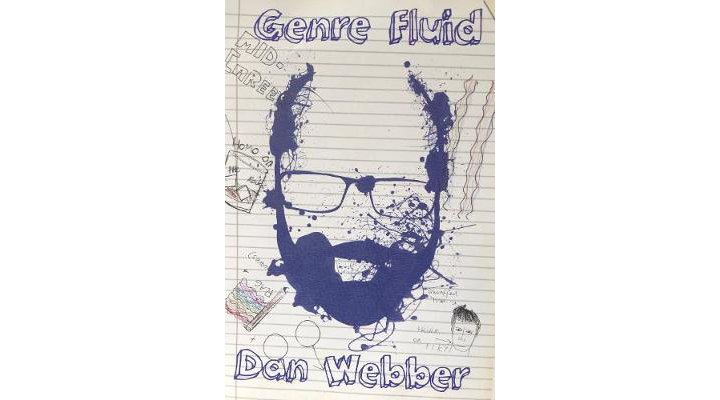 Dan Webber’s Genre Fluid is the culmination of years of touring his live show of the same name, and this represents the second iteration of the book. Genre Fluid is a collection of thoughts about gay sex, relationships and self-identity.

To answer the question Dan poses multiple times throughout Genre Fluid: it is not comedy. Poetry, yes, but comedy, not in the slightest – at least not in a written format, where you can go over what has been said and re-evaluate the way that it comes across in context. Maybe Genre Fluid works better as spoken word, but in this context it does not set out what it achieves and comes across as an egotistical musing on why someone doesn’t get what they want out of relationships or their performances.

The main conceit of Genre Fluid is that it’s a stream-of-consciousness depiction of a person who came out of a relationship and over-analysed the next few years of their life as they tried to use performance art as a way of working through their emotions. This, I understand. What it actually comes across as is someone’s inner monologue, unfiltered and clearly uninterested in the way that their internal thought process is digested by others. For instance, there’s the reported incident, which the author off-handedly dismisses as unimportant, when an audience member suggests that maybe “genre fluid” could be seen as offensive by someone who identifies as gender-fluid, and how completely unaware of their own hypocrisy that portrays their character.

There are two parts that actually offended me in Genre Fluid because the narrative persona’s lack of self-awareness is painful to me as a reader – and as someone who passionately advocates for unseen voices where possible. The first is a discussion of labels.

Labels are used, generally speaking, to quickly categorise items into easier-to-filter groups. Like the phrase “no fats, no femmes, no Asians”, they are quite toxic in the wrong context and more often than not problematic, as correctly identified in Genre Fluid. It is therefore utterly ridiculous to spend an entire section complaining about them, their use by people against yourself, and depictions of how little regard you have for them, and then spend the very next section of the book talking about how you only love twinks and you will never be attracted by anyone else. Urgh. Jesus. Gross.

Secondly, it is wildly hypocritical to complain about the use of transphobic language, recognise it for being so, and acknowledge it to the point you are painfully aware of other people’s responses to it, and then go, ‘I did nothing because I was acting professional and keeping my head down.’ NO. ACTING PROFESSIONAL IS NOT JUST KEEPING YOUR HEAD DOWN. IT IS CALMLY YET POLITELY SUGGESTING THAT THE WAY THAT THIS CONVERSATION IS BEING PHRASED IS NOT ACCEPTABLE IN THIS AGE OR ENVIRONMENT – as the author rightly pointed out earlier in Genre Fluid – AND ALLOWING PEOPLE WHO IDENTIFY AS TRANS THE SPACE TO TALK ON THE SUBJECT.

I hope this works well as a piece of performance art or that it is a wider hyper-critical analysis of the level of hypocrisy that is evident in a large portion of gay, cis, white men, and that I missed the point. Sarcasm doesn’t always translate in literature and it could be that Genre Fluid is so dripping with sarcasm I missed it. If performed as such, maybe Genre Fluid would be something I would enjoy because this is so unappealing it makes my skin crawl.

You can purchase the latest edition of Genre Fluid from Waterstones now.

Interview: Caleb Everett: ‘you know she keeps a diary – and it all goes in’