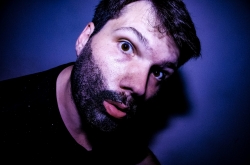 Mj Bain
Mj is a writer, editor and photographer with a million pen names and personalities. He is our literary editor and he's seeking your short story submissions! Email them to mjbain@vadamagazine.com for a chance to be published as part of our Friday Fiction.

Brandon Barchurch is the pseudonym for a 20-something millennial. Alongside a passion for signing his name with flamboyant Bs, he loves getting things off his chest. These ‘House Share Horrors’ are one such opportunity. Having had around 50 housemates over the last decade, there is a lot to unload in this new Vada Magazine Friday Fiction Serial. Find him on twitter @BBarchurch

My decade of house shares begins with my move to uni in 2010. (2010: how long ago and blissful you feel.) I was actually already living in London at the time with my nan, but with the influx of cash from the student loans and grants I was more than ready to move out and have the proper uni experience. And, just as importantly, so was she. I had been there on and off for a few years and she had made it perfectly clear that she wanted me out. Also, while London may just all be ‘London’ to outsiders, it is a huge hodgepodge of areas and it would have taken almost an hour to get to campus from hers so I quite simply had to move.

I annoyingly missed the boat with halls as I got into uni through clearing very late in the day and there were no places left. I scoured the internet and quickly noticed how much cheaper the ‘roommate wanted’ sections were than the official letting sites. I may have been flush with cash for the first time in my life, but I wasn’t about to go and waste it all on a 4-bed student house in Mile End if I could save a few hundred by moving in with a ‘chill and chill couple’ from Gumtree instead.

After narrowing the field with a number of fruitless and frankly unsettling chats, I ended up in the Hope and Anchor pub for an interview. Apparently the room was “being cleaned” for me and so we had to meet there instead. At the time I was fine with this and thought it was cool that we were meeting at the pub and that I already had my very own local. Looking back, though, I confess this was possibly a warning sign. And it wasn’t the only one. For example, at the same time as assuring me that my room was being cleaned, either herself or the ferret on her lap were wafting distinct indications my way that cleanliness wasn’t one of her key priorities. A ferret is just a conversation starter though. What really should have set the alarm bells off was her interchangeable use of ‘housemates’ and ‘roommates’. One is to be expected, the other is straight from American porn.

That’s me now, however, with all the wisdom of the 2020 bags under my eyes and having survived 50-odd housemates. The emo kid back then probably didn’t even see the ferret through the fringe covering half his face and he was far too excited to worry about word semantics. So, with a smile on his face, he handed her a month upfront in cash from the sticky ATM in the corner of the bar and she slid him the keys.

I eventually found the place (as she had to go to work and thus couldn’t show me) and it was pretty featureless. The front window was admittedly cardboard instead of glass, but if anything that just made it fit more seamlessly into the neighbourhood. I let myself in and then glanced at the keyring to find my room number: ‘4b’. There was a flight of stairs going downwards towards ‘1a’ and ‘1b’ so I headed upwards, excitedly thinking I was probably in the penthouse up top with stunning views across the London Docklands.

It was indeed at the top of the house, but it was no penthouse. On the right end there was a pink and yellow sea of dusty installation felt towering upwards towards the cracked and flaking roof tiles. To the left there were two beds on each side separated by a single desk with two chairs. One side was clearly lived in with the bed covered in a very clearly used sheet and snappable blanket. The other was empty apart from a post-it-note on the bedframe reading ‘4b’.

Just as I was about to duck back downstairs to get some fresh air and find someone to complain to, a metallic clanging echoed around the attic space as a toilet flushed, and I heard footsteps heading up the stairs. Not wanting to be found stood frozen in the doorway, I went and sat on my new bed; watching the opening and trying not to look too fearful about who my roommate was going to be…

Mj is a writer, editor and photographer with a million pen names and personalities. He is our literary editor and he's seeking your short story submissions! Email them to mjbain@vadamagazine.com for a chance to be published as part of our Friday Fiction.

View all posts by Mj Bain →