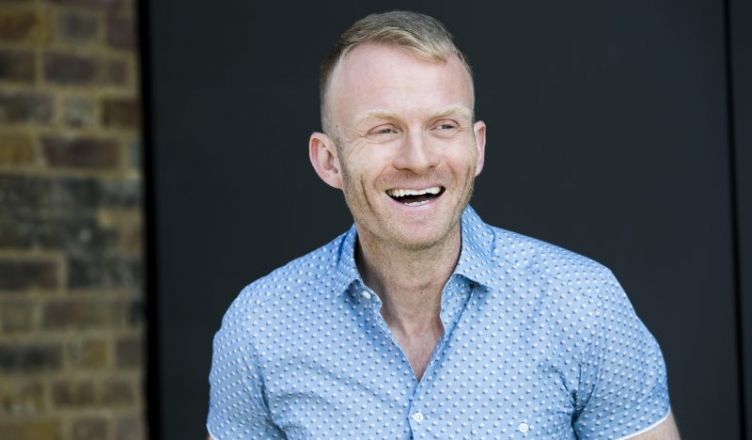 Matt Cain takes us on a journey of self-discovery and searching for a long-lost love, in his latest novel The Secret Life of Albert Entwistle. Speaking to Vada Magazine ahead of the book’s publication, Cain explains how he hopes to bring gay issues to a mainstream readership, and how he too has found the love of his life.

It’s with the popping of a cork and the pouring of a glass of prosecco that my interview with Matt Cain begins. This is a first for both of us: Cain’s first interview about his forthcoming book, and my first post-lockdown interview that isn’t over Zoom. We are perched on Cain’s tree-top terrace overlooking North London, with his cat Nelly meandering at our feet. We’ll spend about an hour talking about The Secret Life of Albert Entwistle, and another hour or so gossiping. The latter is strictly off the record, of course.

“I actually thought to myself, I’m going to do it once I’ve done the interview with Hadley, because I know he will pick up on certain things, and remind me what the book is actually about,” Cain tells me as we begin, that his publisher has requested a list of ten “book group questions” to go at the end of the book. The only problem is, he wrote the book so long ago that he’s worried that certain elements of the book might have escaped him. No pressure, then, I thought.

The Secret Life of Albert Entwistle is about a 64-year-old postman in a quiet town in the North West of England, who lives alone with his cat, and keeps himself to himself. We meet him doing his rounds, delivering letters, birthday cards and parcels to his local community. But Albert is hiding a part of himself. It takes the arrival of a letter announcing his forced retirement, to shake him into embarking on a journey to search for his long-lost love, George.

“I had a note about writing about a gay man trying to find a lost love. You know what it’s like with ideas, they always shift around and other things that happen to you feed into them,” Cain tells me when I ask him where the idea for this book came from. “A few things had happened to me to help me appreciate how much things have moved on in our society, when it comes to being gay. I just can’t believe how accepted or celebrated we are now, compared with how things were only a couple of decades ago.”

Listening to two former prime ministers of the Conservative Party talking about marriage equality got Cain thinking. Firstly David Cameron’s speech when he departed from 10 Downing Street, in which he mentions his pride at pushing through the Equal Marriage Act. And subsequently Theresa May echoing similar words during another speech.

“If the Tory Party are saying that acceptance as gays is a touchstone of their values now… My God! When I was growing up, Tories were bringing in discrimination against us, through legislation like Section 28. I thought, we really have moved on.”

It was once Cain had read Eleanor Oliphant is Completely Fine by Gail Honeyman, a book which sparked the genre “up lit”, that he gained some clarity about how he wanted to explore this idea of an older gay man finding a lost love. The genre is used to describe books that are life-affirming, through their exploration of the human experience and human connections. It’s something that Cain wanted to look at – a story about a character that overcomes adversity in order to gain more meaningful human connections.

“In order to explore gay history, he needs to be of a certain age,” Cain explains of his thought process behind Albert’s character. “I didn’t want him to be too old, because once somebody is in their 70s and 80s, people think of them as sexless. I’d personally like to think I’ll still be having sex in my 70s, but I didn’t want to desexualise the book. I did think because he’s sweet and cute, and he is looking for his lost love, there aren’t that many opportunities for sex in the book. So I needed some provoking life crisis to set him off on the journey, which is why he’s in his 60s.”

The idea behind Albert being a postman actually links back to his previous novel, The Madonna of Bolton. Due to the success of that book, many publishers began conversations with Cain about potential future projects. One of the ideas was about a postman who had become disconnected from his community, and was attempting to find his way to reconnect with them.

“That particular storyline didn’t take, but there was something about the role of a postman in a small town that was really quite interesting,” he recalls. “They’re delivering birthday cards, legal papers, the stuff of life, and they’re an essential member of the community. Everybody knows you in those small towns, and you’re very much a part of people’s lives, but in a very superficial way. There was just something in there that fascinated me.”

Readers of the book will notice Cain’s attention to detail when it comes to his descriptions of the role of a postman and the inner workings of Royal Mail. His research, Cain shares, involved searching online for interviews with postal workers, Royal Mail training videos on YouTube and looking at career advice pages for people interested in a career in the postal service. It also helped that Cain’s cousin works for Royal Mail and was able to contribute to the accuracy of his research.

RELATED ARTICLE  Is the US ready for equal marriage for LGBTQ people?

In addition to the role that postal workers play within their local community, Cain decided to make Albert a postman to draw parallels between the letters he exchanged with his long-lost love George, when they were teenagers, and the letters he delivered to people in the present day.

“It’s a bit of a stretch,” Cain says pouring me another glass of prosecco, “because obviously postmen also deliver bad news, like final demands for unpaid bills. But the notes between Albert and George made him happy, and him thinking that letters could make people happy is why he decided to become a postman in the first place. He associates letters with their ability to lift people’s spirits.”

The book is set in the present day, but includes flashbacks to when Albert and George were teenagers. Cain tells me these scenes are reflective of the lack of acceptance during that time.

“I realised that for two teenagers to have a relationship at that time, it could not have gone on in the midst of everyday society,” he explains. “They’d have to step out of society, which is why I came up with this secret meeting place on the moors.”

Not only was this teenage relationship taboo in society, it was illegal. During the book, Albert’s hostile relationship with the town’s public toilets, where his police officer father carried out raids on gay men who used them for sex. It’s just one example of how Cain has woven the legislation at the time and the human cost it had on gay men.

“All those small towns that don’t have a gay scene,” explains Cain, “I know from growing up in Bolton – it was all about cruising grounds and public toilets. So that would have been the frontline for the battle against gays, who for just by exploring their sexuality, were breaking the law. Even though I was writing about a sweet character, and the book is very much aimed at a mainstream readership, the activist in me always stirs from within.”

Cain acknowledges that some people would say that gay men meeting up in a public toilet was “disgusting”, but he argues that this is somewhat a short-sighted view of cottaging.

“Where the fuck else were gay men supposed to meet each other, when all the other places that straight people could go to were closed to us?” he exclaims. “The activist in me wanted to have an unapologetic exploration of the role that cottaging played in our history and our experiences as gay men.”

His exploration of gay identity was something that Cain also wanted to bring to a mainstream audience. As a self-described camp, effeminate gay man, Cain has had to deal with comments about his sexuality for most of his life. Yet it was through interviewing fellow gay men about their experiences during his previous job, as Editor-in-Chief of Attitude, that he came to understand that having “passing privilege” was perhaps more of a hindrance than at first thought.

“You’re thrust onto the frontline whether you like it or not, and you’ve just got to deal with it,” Cain says of gay men who do not have passing privilege. “When I started going into the feelings of this character Albert, it is a bit more complicated. Yes, it was easier for him at school and he could stay in the closet when the world was a hostile place. But of course, he stayed in that closet for a very long time, and he could hide away and assimilate. I’m not sure that is a privilege after all.”

Cain says he’s unable to talk about his future work projects, but assures me there’s plenty of exciting things to come. That said, the book is dedicated to someone he is very keen to tell me about. “The love of my life!” he beams, when I ask about his fiancé, Harry. “I was already two thirds of the way through Albert when I met Harry. I’d given up hope of it happening to me, and I’d made peace with that.”

Cain was 44 when he met Harry, 46. Although he is naturally protective about sharing details about his future husband’s life, he does share that he was “going through his own journey, his own challenges, his own difficulties” when the pair started dating. Cain tells me that falling in love with Harry allowed him to “add another layer of depth and emotions to Albert’s character.”

We’ve now drank half of the bottle of fizz, and Nelly the cat has parked herself in my lap; we take a selfie whilst Cain goes to powder his nose. I’m just about to stop recording ahead of the post-interview gossiping I’ve promised Cain, when he says something else about Harry.

“Can you believe it?” Cain smiles. “He’s made a respectable woman of me, and now we’re getting married.”

The Secret Life of Albert Entwistle will be published on 27 May 2021, and is now available to pre-order.