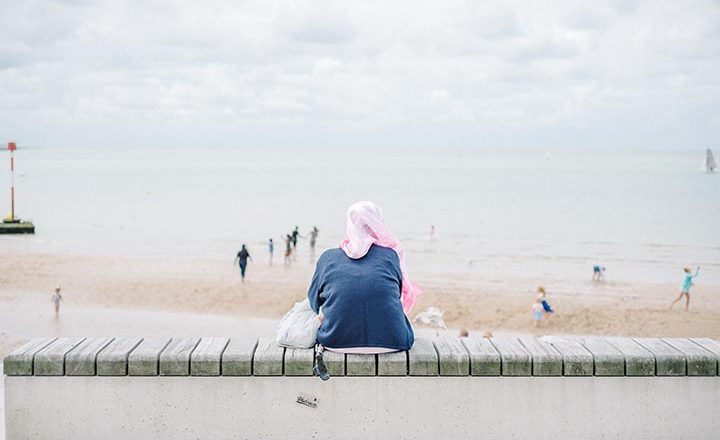 Scottee
Scottee is a 27-year-old performer, broadcaster, director and writer from Kentish Town, North London. He is an associate artist with the Olivier award winning company Duckie, and the iconic Roundhouse. Creator of the talent show Burger Queen, variety show Camp and live art collective Eat Your Heart Out. Follow @scotteescottee

Latest posts by Scottee (see all)

Attempting to be an artist, each year I run away from January by booking three weeks of post-festive contemplation. My aim is to remember what it’s like not to drink mulled wine every night and to write the shows for the forthcoming year.

I love anywhere that has a reputation for being a little rough around the edges and that offers faded sea side glamour and a plethora of charity shops – this year I opted for Margate.

In recent years Margate has had some bad press: its high street empty since Shoe Express, River Island and M&S recently left; its tourism a forgotten memory thanks to cheap flights to the Costa Del Soulless; and its spirit seemingly downtrodden.

I arrive with a bag full of optimism and a note pad of to-dos, and put the key in the door to my abode for the next few weeks – The Pink House. Situated in nearby Cliftonville it’s my little patch of Hollywood glamour in Kent, an original art deco two-up-two-down full of period appropriate furniture and crockery. Greeted by the scent of cinnamon and a tray of posh tea (and vino!) I kick back and with that my passionate affair with the Isle of Thanet has begun.

On first glimpse Margate will live up to its recent reputation of being a bit forgotten, but scratch at the surface and you’ll find some hidden gems. Your first point of call is the old town. It’s littered with vintage shops but before you roll your eyes at the V word, this isn’t the Brick Lane rip off we have become accustomed to – it’s affordable, good quality clobber that’s been sourced from local charity shops and house clearances. They are even up for a bit of a haggle. Pop to Madam Popoff’s on Market Street if you like your vintage covered in sequins, beans or feathers and then, just down from there, you’ll find local character Mr Joe Brown whose shop, Margate Retro, deals in the most wonderful retro lighting. We came across his shop one windy Monday afternoon to find the electric fire on and his mates hanging out playing Northern Soul records.

For those of you wanting a spoonful of theatre with your afternoon tea you must pop to The Mad Hatter’s Tea Room. If Oscar Wilde had lived through the 1970s, had a penchant for Lady Di, swing records and yellow napkins, you’re half way there to what tea with Peter Clements-Bullett is like. £16 will get you the biggest glass of champagne you’ve ever had, smoked salmon sandwiches and a homemade cake of your choice. Its only downside is it’s only open on Saturdays so book ahead (but not too far or he’ll put the phone down saying “May? I might be dead by then”).

My most regular haunt since arriving has been a cosy sea facing pizza joint with fancy lighting and great prosecco – GB Pizza. It’s informal, friendly and extremely welcoming, and the meeting place for many Barbour wearing Margatian. I’ve had most of the menu now. Pear pizza, wine from a barrel and ricotta ice cream makes it sound like someone got the menu mixed up, but their pairings work, and their warmth keep you coming back. Gelupo fans will be pleased to hear they stock gelato! Result! Whilst you’re there get the bloke who runs Shore Coffee from the same unit to make you a Chilli Vodka Hot Chocolate and tell him I sent you.

The High Street is also stuffed with charity shop-shaped treats including Debra where I picked up a pale blue sequin jacket for £4. A few doors down, an independent charity shop flogged me a 50s mirror and knitted blanket for £24 – bargain.

I advise anyone making a trip down to this part of the coast to stop into Kallais, a family run café. And by café, I mean cafe. Reminiscent of something out of Quadrophenia, it shows off with wood panelled booths and ‘Homemade Bread Pudding for 90p’. They even serve my cockney Nan’s favourite Lemon Tea, which for those of you from the north is tea with a slice of lemon in it! A meal for two, two rounds of tea and pudding will set you back a tenner.

You can also pop to the Walpole Bay Hotel for afternoon tea, if you like, with their fancy silverware and shop bought scones. The non-atmosphere aside, the fact Alex Polizzi has even attempted to turn it around, not to mention the plethora of nick-nacks the owner has on display in her ‘museum’, means it’s worth the visit (even if they do serve squirty cream) and it won’t leave you out of pocket.

Entertainment comes in the shape of the various arcades Margate has to offer. The slots only take 2p coins, with not a 10p slider in sight – this, I suspect, is significant.

Post 8pm my highlight has to be the bingo. Games are at 2pm, 7pm and 9pm, but be warned – it’s rammed. In fact it’s the busiest place I’ve visited since being here. If you’re nice to the manager Graeme he’ll find you some dabbers and give you a tour.

If you’re the kind of person who likes your culture with a cup of organic coffee then head to the Turner Contemporary Gallery – this is the town’s newest addition to its regeneration program. The Turner flaunts nice art in a beautiful location with stunning views looking out to the North Sea.

If you like staying in boutique hotels then pop to the Reading Rooms for a weekend – I spent a good half-hour chatting with the owner in Morrisons, which sums Margate up so well. I almost feel like I’m part of the furniture. Margate is nothing like its reputation – it’s warm even though it’s bitterly cold and welcoming even though you are an outsider.

Get on the next train to Margate and put some money its way. It needs a little hand, but you’ll be rewarded tenfold.

Scottee is a 27-year-old performer, broadcaster, director and writer from Kentish Town, North London. He is an associate artist with the Olivier award winning company Duckie, and the iconic Roundhouse. Creator of the talent show Burger Queen, variety show Camp and live art collective Eat Your Heart Out. Follow @scotteescottee

View all posts by Scottee →