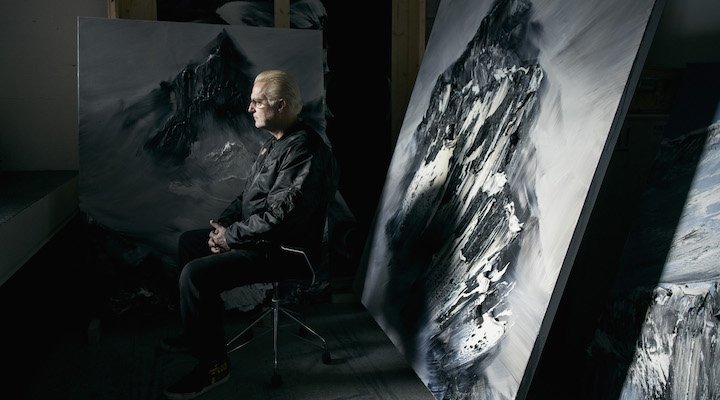 The celebrated Swiss painter, Conrad Jon Godly is launching his first UK solo show To See is Not to Speak at London’s JD Malat Gallery.

Godly from Davos, Switzerland studied as a painter at the Basel School of Art, before becoming a successful fashion photographer for nearly two decades. In 2005 he returned to his roots as a painter in the mountains of Chur.

Here, Godly focussed on more meditative work, studying nature and using his understanding, combined with memory and imagination to bring it to life on his canvases. Music is an integral part of Conrad’s meditative painting process, setting the mood and tone.

Godly says that “Only after closely watching and listening, can you understand your subject. And understanding is crucial to paint the subject well.” His experience as a photographer has allowed Godly to focus on the renderings of light interaction, spatial projection and texture, with mountains representing imperishable and natural magnificence and spirituality.

To See is Not to Speak

The Exhibition is of 15 pieces that straddle both abstract and hyperreal with photo-realistic mountains which drip from the canvas, using a thick paint that adds a 3D quality.

Up close, viewers can enjoy Conrad’s thick and heavy impasto marks, with frosty pols mixed with turpentine and his trademark wide, sculptural brushstrokes. Step back, and viewers might be looking at a photograph, staring down a misty precipice. The mountainous vista surrounding Conrad as he grew up have become his muse and he is passionate about conveying the essence of them. Godly doesn’t see himself as a landscape painter, he is interesting in capturing the mood and feeling of light, or the reflection of the moon on snow.

Living between his native Switzerland and Japan, where he learned the art of mindful appreciation has had a huge impact on his art. It inspired the title of the exhibition To See Is Not To Speak taken from Japanese author, Kobayashi Hideo’s original quote “To see is not to speak, because words could distract your eyes.”

To See is Not to Speak will be open to the public from 25 January to 2 March. For more information visit jdmalat.com.