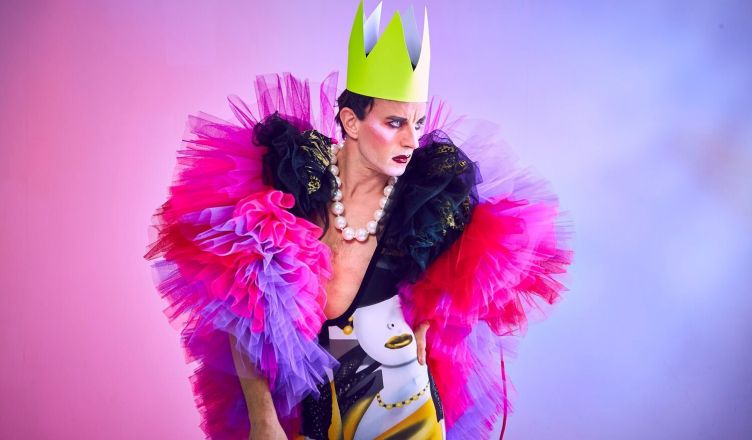 Curated by Waterside Arts, Refract is an exciting festival of work that takes place in and around Sale in Trafford. It has a carefully crafted programme, jilted from convention, for audiences of all ages.

Back with a bang this July with the fourth edition, Refract:21 brings the opportunity to experience things differently at Waterside. Running from Thursday 22 July to Saturday 31 July, this ten day event promises the very best in live comedy, music, dance, experiential performance and theatre.

As well as a raft of events for all ages, the festival is also proud to boast a number of LGBT+ acts and performances. Check out the details below.

Jonathan Mayor
Jonathan Mayor sets the stage alight with his razor sharp audience banter and stunning charisma. But don’t be fooled by the glitter and glamour, underneath lies an intelligent line of socio-political humour, from a unique and fascinating perspective.

The award winning cabaret, that celebrates performers of colour, will be back in town, this July.

Following their (quite phenomenal) full house Manchester debut in 2019, we’re promised a serving so generous, we’ll be smelling of Cocoa Butter for days!

This one’s for you! It’s been a tough year; so trust the trailblazers of decolonising and moisturising cabaret to be a part of your super summer. We have so much to make up for!

Dusty Limits is a singer, actor, writer, director and compere and one of the UK’s top cabaret performers, described by Time Out London as ‘The Trailblazer’ of contemporary cabaret.

Michael Roulston is a singer, composer and musical director who has worked with some of the biggest names on the scene, including David Hoyle, Meow Meow and Dillie Keane.

Together they have been writing original songs for over 15 years and this show is a celebration of that musical friendship. The songs are by turns scathingly satirical, melancholy and bawdily hilarious. Fans of Fascinating Aida, The Tiger Lillies or The Divine Comedy should attend.

Jonny launches back into life post-lockdown with all his singing buddies in this very musical, silly, stunning and a little bit naughty cabaret.

Expect a repertoire of Woo / Thomas original songs, twisted cabaret standards, raucous sing-alongs and wild lip-syncs from Jonny that invariably end with him taking his kit off. It’s a sequin-soaked, star spangled spectacular to help us all launch back into living life to the hilt.