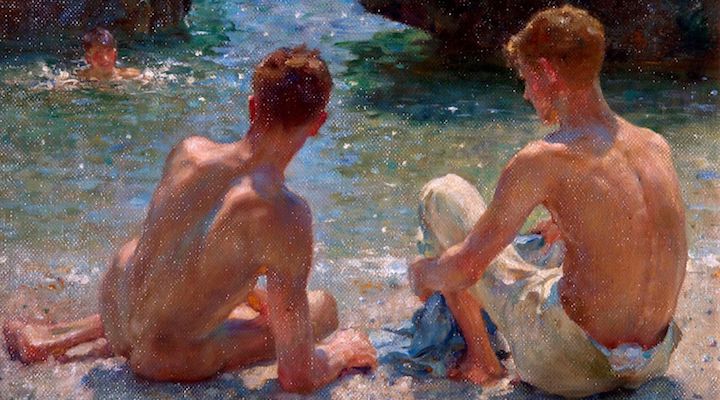 This Spring, Tate Britain will host the first exhibition dedicated to queer British art. Unveiling material that relates to lesbian, gay, bisexual, trans and queer (LGBTQ) identities, the show will mark the 50th anniversary of the partial decriminalisation of male homosexuality in England and Wales.

The Queer British Art exhibition will present work from the abolition of the death penalty for sodomy in 1861 to the passing of the Sexual Offences Act in 1967 – a time of seismic shifts in gender and sexuality that found expression in the arts as artists and viewers explored their desires, experiences and sense of self.

Spanning the playful to the political, the explicit to the domestic, Queer British Art 1861-1967 will showcase the rich diversity of queer visual art and its role in society. Themes explored in the exhibition will include coded desires amongst the Pre-Raphaelites, representations of and by women who defied convention (including Virginia Woolf), and love and lust in sixties Soho. It will feature works by major artists such as Francis Bacon, Keith Vaughan, Evelyn de Morgan, Gluck, Glyn Philpot, Claude Cahun and Cecil Beaton alongside queer ephemera, personal photographs, film and magazines.

Work from 1861 to 1967 by artists with diverse sexualities and gender identities will be showcased, and will range from covert images of same-sex desire such as Simeon Solomon’s Sappho and Erinna in a Garden at Mytilene 1864 through to the open appreciation of queer culture in David Hockney’s Going to be a Queen for Tonight 1960. A highlight of the exhibition will be a section focusing on the Bloomsbury set and their contemporaries – an artistic group famous for their bohemian attitude towards sexuality. The room will include intimate paintings of lovers, scenes of the homes artists shared with their partners and large commissions by artists such as Duncan Grant and Ethel Walker.

In contrast to the bleak outlook from the courtroom prior to 1967, queer culture was embraced by the British public in the form of theatre. From music hall acts to costume design, British theatre provided a forum in which sexuality and gender expression could be openly explored. Striking examples on display will include photographs of performers such as Beatrix Lehmann, Berto Parsuka and Robert Helpmann by Angus McBean, who was jailed for his sexuality in 1942, alongside stage designs by Oliver Messel and Edward Burra. Theatrical cards of music hall performers such as Vesta Tilley (whose act as ‘Burlington Bertie’ had a large lesbian following) will also be featured, as well as a pink wig worn in Jimmy Slater’s act ‘A Perfect Lady’ from the 1920s.
Queer British Art 1861-1967 will show how artists and audiences challenged the established views of sexuality and gender identity between two legal landmarks. Some of the works in the show are intensely personal while others spoke to a wider public, helping to forge a sense of community.

RELATED ARTICLE  La Grande Maison Bernard Magrez, a destination for all the arts

Queer British Art 1861-1967 will be accompanied by a fully illustrated catalogue from Tate Publishing and a programme of talks and events in the gallery. The exhibition runs from 5 April to 1 October 2017.