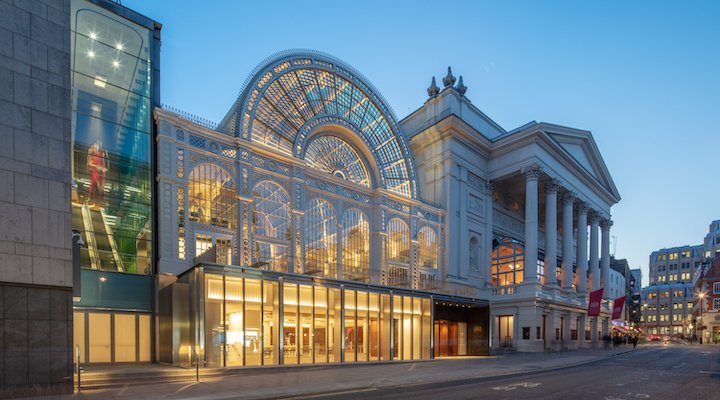 This month the Royal Opera House London opened its doors to its newly transformed home. Following their Open Up project, the Royal Opera House now houses a brand new Linbury Theatre (with the ROH stating that 25% of seats will be on sale for £25 or less), and vastly increased entrances, foyers and terraces open to the public everyday, not just to ticket holders.

The Open Up project was estimated to have cost over £50m, with all funds having been raised through philanthropy (not public funding). The impressive design and spaces were created by the multi-award-winning architectural design practice based in London, Stanton Williams. Having previous experience on museum and gallery spaces, the architects have put the user’s experience of space, light and materials at the forefront of their design. Working with partners including engineering firm, Arup, and other contractors, the finished result is a calm backdrop for public spaces, and improved acoustics in the new Linbury Theatre.

RELATED ARTICLE  Where to sip cocktails in London this month

The Royal Opera House as a new destination

The extended and new spaces mean that the general public can interact differently with the Royal Opera House, and begin to change the purpose of the building. Rather than it being purely a building with theatres for ticket holders watching some of the most prestigious ballets and operas in the world, the new Royal Opera House building is opening its doors to everyone. From 10am daily to be specific.

The Royal Opera House transformation has enabled it to launch a new programme of (ticketed and free) daytime events, activities and festivals for people of all ages to encourage the general public to understand and explore not only the art forms performed on stage, but the technical skills behind stage. This includes demonstration workshops of backstage crafts, and front-of-house displayed of costumes from famous episodes in the history of The Royal Ballet and The Royal Opera. Alex Beard, Chief Executive of the Royal Opera House has said the ROH wants “as many people as possible to visit one of the world’s most beautiful theatres, to experience our art forms and to get a taste of the remarkable creativity at play here.”

The Royal Opera House will also continue to offer its backstage tours, which give an exciting overview of the backstage areas, including costume and lighting workshops. There’s also a chance to see The Royal Ballet in rehearsals in their iconic dance studios. These popular tours take you into history to discover more about the Royal Opera House and the legends of London’s theatre land, as you hear stories about the people that have danced, acted and sung, and the performances that have taken place, in and around Covent Garden.

The heart of the Open Up project is a brand new Linbury Theatre, the West End’s newest and most intimate theatre. This has provided an additional world-class stage for The Royal Ballet, The Royal Opera and a host of internationally celebrated artists and partners.

The Royal Opera House’s aim is for many more people to enjoy and engage in exceptional ballet and opera. Under the directorship of Kevin O’Hare, The Royal Ballet unites tradition and innovation in world-class performances, and is a driving force in the development of ballet as an art form. It brings together today’s most dynamic and versatile dancers with a world-class orchestra and leading choreographers, composers, conductors, directors and creative teams to share awe-inspiring theatrical experiences with diverse audiences worldwide.

The Royal Opera, under the artistic direction of Antonio Pappano, Music Director, and Oliver Mears, Director of Opera, is one of the world’s leading opera companies. It is renowned both for its outstanding performances of traditional opera and for commissioning new works by today’s leading opera composers, such as Harrison Birtwistle, Mark-Anthony Turnage and Thomas Adès.

For the new Linbury Theatre, the Royal Opera House has announced an opening season:

Full information about the new public spaces at the Royal Opera House and listings for the Linbury Theatre are available at roh.org.uk.