We were exceedingly lucky this month to be invited to the sell-out second date of Manchester’s astonishing new magic and hypnotism show, The Vanishing Cabaret at 1837 bar beneath Alston Bar & Beef

The Vanishing Cabaret was spawned after a sell-out show Edinburgh Fringe (a debut at that) three years ago. Calvert and Fitton, who had experienced the wild energy of Edinburgh, lamented the apparent lack of live entertainment options in Manchester. (True, there’s the previously mentioned GM Fringe, Manchester Pride’s Superbia and the biennial Manchester International Festival, but nothing is quite the same as the thronging streets and venues of Edinburgh Fringe.)

So, inspired by their experiences in chilly Scotland, they found first Dickinson, and then the 1837 Bar Manchester. Thus The Vanishing Cabinet was born.

1837 is a cosy venue hidden behind a curtain in Alston Bar and Beef Manchester, serving a delectable selection of gins, alongside cocktails and a range of fine spirits. It has a stylish speakeasy vibe, and it has retro cool in spades.

Upon arriving at the venue, we were greeted by Calvert and shown to our reserved table. There we were given complimentary prosecco and had occasion to chat to the only other occupant of the table (a friend of Calvert’s who had come alone).

The ambience of the venue is perfect for a show like this, and I can completely see 1837 becoming a hub for close-quarters, cabaret-style performance all-year-round. It occupies the same sort of space as the plush downstairs of Apotheca and the old performance space that used to be in Taurus (sadly now closed), both of which were Greater Manchester Fringe staples.

Aaron Calvert left the world of medicine behind to become a mind-reader and hypnotist. Last year he hit TV screens in the Channel 4 special Hello Stranger, where a couple were hypnotised to forget each other. Most recently, he hypnotised Thomas Cook Airlines passengers at 30,000 feet.

Magician Sam Fitton has had sell-out, five-star shows at the Edinburgh Fringe and has performed internationally and for celebrity guests including Colleen and Wayne Rooney, David De Gea and James May, and even Richard Branson and the guests at his Kasbah Birthday Party! Fitton is also the co-writer and director for Aaron’s TV and live shows.

Joel Dickinson was, interestingly enough, once the magician of a castle. He started out as a professional street busker in Manchester before turning to the stage. He’s won a variety of awards, including North West Close Up and Stage Magic Championships, and is the first honorary fool of Muncaster Castle since Tom Fool himself.

I’ve seen plenty of live shows in my years, but not many of them included magic, mind-reading and hypnotism. Generally, I’m a sceptic about such things, and jump on Google after every act to figure out how they do it. 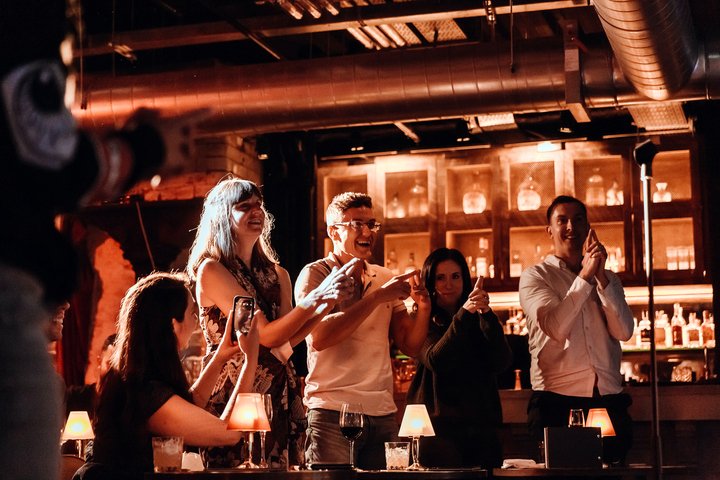 But The Vanishing Cabaret was a little different. It felt very warm and intimate, and the jokes (though often the kind your dad would tell) kept the atmosphere relaxed and jovial.

The show felt very polished, very crisp. The performers were excellent and I didn’t feel the need to analyse it: it was an enjoyable evening that the audience completely went along with.

My favourite act of the night was probably Aaron Calvert. He stood my partner up and ‘read his mind’ (guessed which numbers on a dice he’d picked), and he guessed right every time. Stefan isn’t much of a fibber, so I guessed a few of his answers right too (it became easier as the act progressed) but the early deductions were really impressive in particular.

Joel Dickinson was my second favourite. He was often silly, very down-to-earth, and very fun. It was hard not to like him.

Sam Fitton had a slightly harder time as host, and therefore required to do the most talking, but he was perfect in this role. He had the crowd eating out of the palm of his hand and laughing at every joke.

Probably my least favourite performer of if evening was the guest act: Thom Peterson. He was pretty funny, but some of his jokes were older than I am and one rape joke in particular was distasteful the first time I heard it, let alone in 2019.

All in all, though, it was a fun and lighthearted evening with some great tricks and an impressive reading of the audience.

The show debuted in July, and it sold out quickly. Similarly, the August event we attended was equally packed out – no mean feat for an underground (literally) venue tucked away between Manchester Cathedral and the Corn Exchange.

The next show is on 12 September, so if you want a ticket, book now to avoid disappointment!

For those who attend The Vanishing Cabaret, there’s also a fabulous 20% discount off Alston Bar & Beef’s à la carte menu (watch this space for a review of the restaurant itself).