I find myself feeling a little nervous as I sit in the Lisbon pub in Liverpool, I feel as though I am about to interview, the winner of The X Factor or Britain’s Got Talent. Of course, those competitions are still running or in production so there is no winner yet. Besides, I rarely get star struck, unless of course utter fabulousness is about to answer my questions, which is the case right now as I eagerly wait for the RuPaul’s Drag Race UK Ambassador, The Vivienne.

Then, an air of celebrity forces me to turn and, surprisingly, a very humble drag queen arrives. With emerald green hair and a black pencil dress wrapped around her, I know she means business, yet I am instantly calmed knowing this is going to be fun.

Vivienne, it is a pleasure to meet you. What inspired you to become a drag queen?

Make-up. Growing up it fascinated me – the colours, the transformation it allowed. I worked on the make-up counter at Debenhams for New ID, but I just didn’t feel as though I was able to express my passion for make-up enough. I needed a creative outlet so I started experimenting on myself. It was from there I started to come up with some amazing ideas.

When was your first gig?

My first job as a drag queen was at Pink in Liverpool. I remember I got a bottle of Blue WKD and £25 to stand on the door. It was there the name ‘Vivienne’ was given to me by Tammy Pax, because I was known for draping myself in Vivienne Westwood.

After Pink I moved to Superstar Boudoir. There I met my partner of the time, another drag queen, and we travelled abroad to work in Lanzarote and Turkey.

From there I came back to Liverpool and started as a DJ at Gbar, and I’ve been there since.

You have a fancy for designer labels. Has that always been the case?

Absolutely. Ever since I attended private school in North Wales. I would turn up with a Louis Vuitton bag, wearing Chanel glasses. Often my accessories would be confiscated.

It wasn’t all bad, though. I was stood outside the headmaster’s office one day and another teacher walked past. She gave me a look up and down and then told me I looked fabulous.

Did you come out quite early at school?

How was that accepted?

Great. I was a confident person at school and I was funny. I think when you are that kind of character, your lifestyle is accepted more.

Do you see yourself as a role model for new drag queens?

I don’t really see myself as a role model. I’m happy to inspire people, but ultimately being me is for me, if that makes sense? There is pressure sometimes with having a public persona – especially in the gay community.

Since Drag Race, I have become more aware of how I react to things or how I do things on the likes of social media. I’m aware that I’m an influence to many people, so I want to make sure that influence is positive.

How do you think women perceive you?

This is a good one. Okay there are a few types of woman I meet. Some straight women want to be my best friend, share make-up tips, clothing, hair. Then there are straight woman who are so terrified of their boyfriend’s being snatched away from them by me, they watch me like a hawk. I get a few lesbians who have crushes on me as well, which is always flattering.

Quite often gay men are drawn to drag queens. They want to be around you, hang out with you and party. Why do you think that is?

Darling, a night out with a drag queen is only ever going to be fierce! Seriously, I think gay men are attracted to the courage and strength drag queens have. When you hang around with a drag queen you can totally let your inner Beyonce out.

Often drag queens model themselves around an icon, who is yours?

Cher for her overall look. Her shows are like a full-on drag show with all the costume changes and wigs. Personality-wise, I’d have to say Bette Midler, for her sassiness.

How did RuPaul’s Drag Race come about?

I had watched it religiously. I was blown away with everything about it. I said to myself over and over. ‘I have to be seen by RuPaul.’  So I called my designer Ben Mak and my cameraman John Hyland, we did two days’ work on a video to ‘Cover Girl’, sent that off, and a week later I was in the final 21 girls.

The final was judged by Katy Price, Jonathon Ross and, of course, RuPaul. I can’t describe the feeling of achieving such a goal. Sometimes it seems surreal when I think back to watching the show and where I am now.

What has been the highlight of becoming the UK ambassador for the show?

Going to LA, visiting the set of the show and meeting the people involved. Getting to see the gay scene over there was amazing for me as well – it’s such a different way of life compared to over here.

How is the drag scene in the states compared to here in the UK?

It’s so much more polished. Those girls over there have studied their craft, and nurtured their talent for make-up, hair and outfits. Their performances are on point down to the tiniest detail. Over here, there are some amazing drag queens, of course, but the girls here can definitely learn something from over there.

What’s next for you where the show is concerned?

Hopefully the show will come to the UK. If it does, I will definitely be going for it. But, if it doesn’t, I will be going to the States to do it.

Finally, Vivienne, if you could transform any celebrity male into a drag queen, who would it be?

Oh, definitely Wentworth Miller from Prison Break – just so I could tuck it under for him. 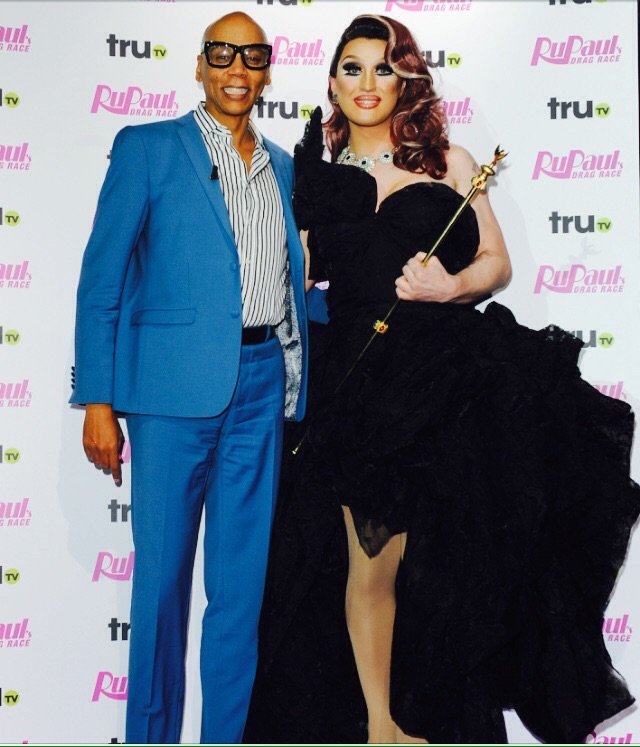 View all posts by PS Ferns →

One thought on “No ordinary label queen: The Vivienne – An interview”