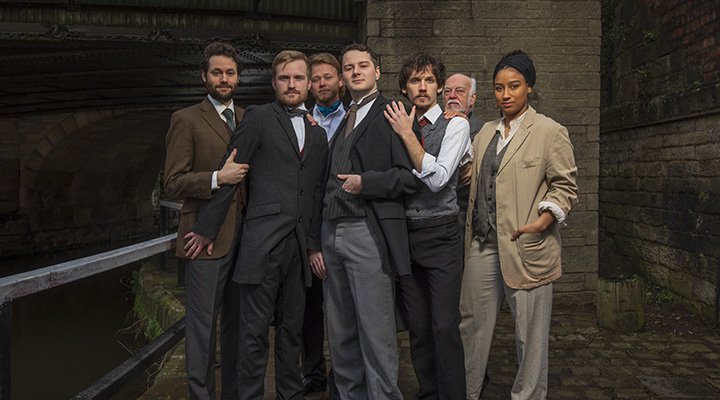 
In 1885, John W Wallace, a working-class man from Bolton, sets up the Eagle Street ‘College’, a book group that celebrates his love for Walt Whitman’s poetry. Attracting a small group of like-minded men, Wallace embarks on a journey of spiritual and sexual self-discovery through Whitman’s words.

When Wallace arrives in America six years later and meets his literary hero face-to-face, he is forced to confront the true nature of the intimacy the college members are seeking. On his return to Bolton, Wallace is unsure how to express his new sexual and spiritual awakening within in the conservative confines of Victorian England.

Written by multi-award winning playwright Stephen M Hornby, The Adhesion of Love tells the extraordinary true story of how an architect’s assistant from Bolton crossed the Atlantic in 1891 to meet the visionary queer poet Walt Whitman.

Stephen’s last play, The Burnley Bugger’s Ball, gained 5 star reviews and he was awarded the 2018 WINGS by the Swedish International Lesbian & Gay Culture Network for his short film Unchechen.

Stephen M Hornby is a multi-award winning playwright and National Playwright in Residence to LGBT History Month. He has spent six months of meticulous research creating the play as part of a PhD in playwriting from archive. His previous work has included Die Diana (winner of the Greater Manchester Fringe Best Drama Award), Loving Her, Loving Him (“A fine script”-The Reviews Hub) and The Burnley Bugger’s Ball (“Hilarious. 5 STARS.”- Remotegoat). Stephen was honoured with the 2018 WINGS award by the Swedish International Lesbian & Gay Culture Network for his short film Unchechen.

Inkbrew Productions was formed in 2016 to specialise in creating innovate and compelling heritage performance and short film. The company is the official production partner to LGBT History Month in England, and is currently also working with Islington Museum in London and the People’s History Museum in Manchester.

LGBT History Month is a month-long annual observance of lesbian, gay, bisexual and transgender history, and the history of the gay rights and related civil rights movements taking place across the globe. It was founded in the UK by Schools OUT UK, the UK’s LGBT education charity. LGBT History Month provides role models, builds community, and represents a civil rights statement about the contributions of the LGBT community. In the UK it takes place in February.