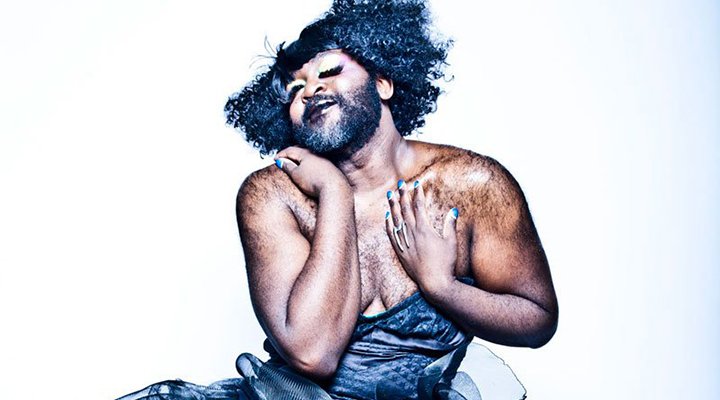 You. Have. To. See. This. Show. Now I’ve gotten that out of the way, I can tell you exactly why you need to see Icons, the new show from drag performer Le Gateau Chocolat, currently running at the Soho Theatre.

The set looks like the sort of bedroom you’d see in a rom-com from the 1980s: soft lighting, old-fashioned TV, posters of everything from Tina Turner to He-Man. Within these surroundings Chocolat takes us on a journey through his musical icons.

The show starts with a rendition of Maya Angelou’s ‘And Still I Rise’, the first hint that this won’t be your usual drag show. What follows is a setlist that reads like a Who’s Who of gay icons. From Dolly Parton to Bonnie Tyler, Chocolat’s inspiration is as diverse as you could wish for.

My personal highlight was the haunting opening performance of Kate Bush’s ‘Running up That Hill’, closely followed by a Madonna medley that screamed ‘young gay bedroom lipsyncing’.

The show wasn’t all 80s bops and disco. A sampling of Barack Obama’s 2004 DNC speech (‘There is not a Black America and a White America and Latino America and Asian America—there’s the United States of America.’) and Trump’s comments on Muslims and Mexicans provided a chilling political edge. And Chocolat’s story of the loss of a relative to suicide was accompanied by an acoustic performance of ‘For Good’ from Wicked which moved the audience to stunned tears.

Chocolat’s voice is a wonder to behold. A classically trained singer who has performed at Regents Park Opera and is currently appearing in Threepenny Opera at the National Theatre, his voice is somewhere between Paul Robeson and Judy Garland. It’s a rich, deep, resounding voice that shrinks when necessary and fills the whole theatre when he belts.

The end comes too soon but Chocolat returns for an encore performance of the classic Newton-John hit ‘Xanadu’. A whirlwind show of emotional lows and dancing highs, this is not to be missed.