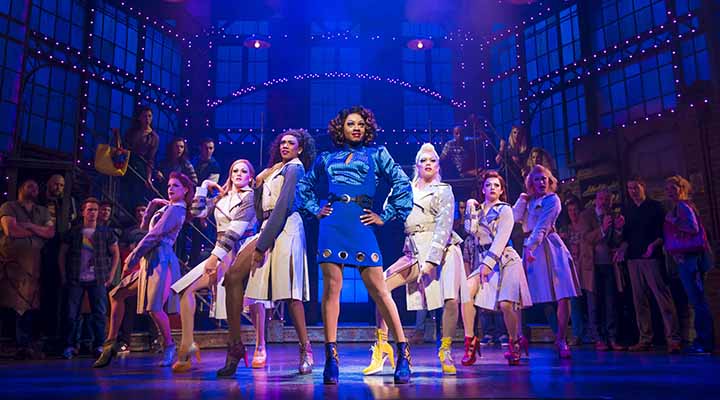 The multiple award-winning musical Kinky Boots hits Manchester from 12 November – 1 December on the next leg of its UK tour. A fantastic cast has been assembled and those high-heeled boots are being polished for the opening night.

Kinky Boots is based on the hit 2005 British film of the same name, written by Geoff Deane and Tim Firth and based in turn on real events depicted in a 1999 episode of the documentary Trouble at the Top (BBC2).

The lead character of Lola, played in the film by Chiwetel Ejiofor, will be played by Callum Francis. Coronation Street‘s Paula Lane (who plays Kylie Platt in the popular soap) will play Lauren and Joel Harper-Jackson will play Charlie.

The tour opened at Royal & Derngate in Northampton on 19 September 2018, returning to the home of this heart-warming British story, whilst the West End production continues at the Adelphi Theatre until 12 January 2019.

The book is by Broadway legend and four-time Tony® Award-winner Harvey Fierstein (La Cage aux Folles), and songs by Grammy® and Tony®-winning pop icon Cyndi Lauper, this joyous musical celebration is about the friendships we discover, and the belief that you can change the world when you change your mind.

Inspired by true events, Kinky Boots takes you from a gentlemen’s shoe factory in Northampton to the glamorous catwalks of Milan. Charlie Price is struggling to live up to his father’s expectations and continue the family business of Price & Son. With the factory’s future hanging in the balance, help arrives in the unlikely but spectacular form of Lola, a fabulous performer in need of some sturdy new stilettos.

Demitri Lampra (Don) has appeared on stage in both The Jungle Book (Image Musical Theatre) and The Wind in the Willows (UK tour).

Kinky Boots is produced by Daryl Roth and Hal Luftig and Playful Productions, in association with Cameron Mackintosh.