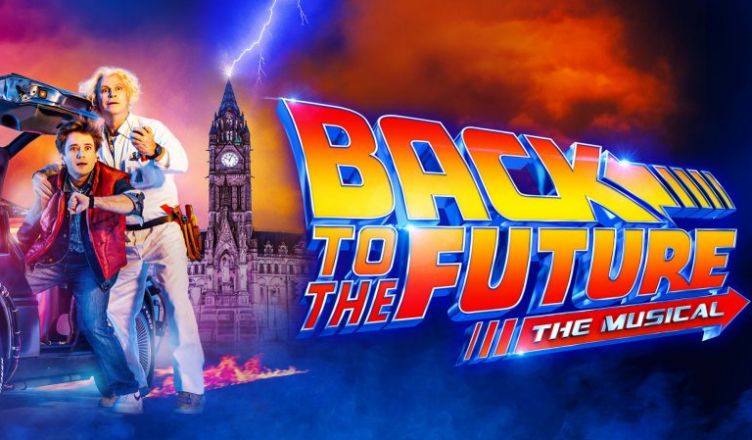 A wonderful exclamation and it’s entirely because it has my name in it… If those two words make you think of a certain time travelling mother-kisser and a bat-shit crazy genius, you’ll know I’m talking about Back to the Future. Yes, the Delorean has landed in Manchester and is wowing audiences at the Opera House – and it’s just as epic as you could imagine!

The classic movie, about a 17-year old who gets sent back in time and accidentally stops his parents meeting, risking himself and his siblings being erased from existence, has been adapted for stage. It had its first ever performance in Manchester last month and lemme tell you hun, it’s AMAZING.

I’m going to talk about Roger Bart for a moment now, so brace yourself… Roger EFFING Bart. Tony winner Roger Bart. George-who-poisoned-Rex Van de Kamp-in-Desperate Housewives Roger Bart. Roger-from-The Stepford Wives Roger Bart. Hercules’-singing-voice-from-Disney’s-Hercules Roger Bart. I am obsessed! OBSESSED! No joke, I’m obsessed with him. I’ve chewed off my boyfriend’s ear for the last two weeks about how much I love him and how excited I am to see him, and let me tell you honey, he owns everything! He was brilliant! Everything I could have wanted him to be. Roger played Doc Brown and legit gave me my entire life. He was funny, exciting, genius and a super smart cookie!

The show is absolutely delightful and had me dancing in my seat, cheering and hollering, and having full belly laughs which are three things I want from any show I see. If you love the movie you need to see this show. Even if you don’t love it, you need to see it. It’s exciting and fun and the effects and sets are perfect! The Delorean is a sight to behold, especially when it’s zooming at 88 miles per hour across the stage so it can get Marty back to the future!

I can’t praise this musical enough, it was absolutely excellent and I want to see it 50 more times. The standing ovation was one of the most deserved I’ve seen. It’s running at Manchester’s Opera House and tickets are available on the ATG website. Book tickets and take your family and nerdy friends – they’ll love it!