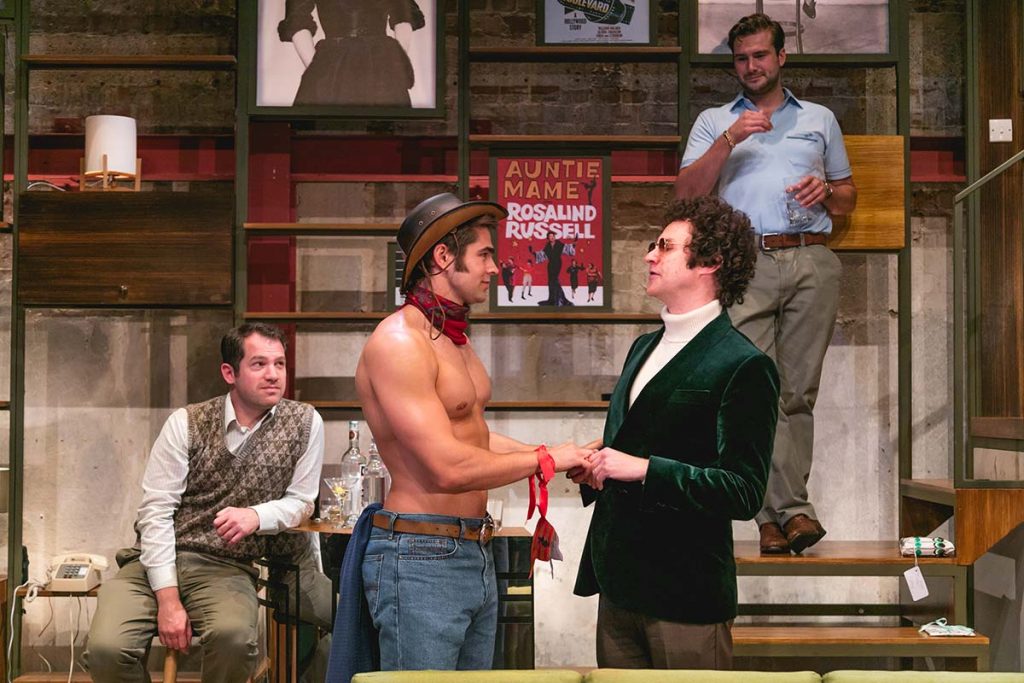 The iconic ‘Boys in the Band’ is in the West End right now for a limited run, before a UK tour then back to London in the autumn.

A lot has changed in 50 years, but some things never change

Highly controversial at its time in 1970, the film adaptation of the off-Broadway stage play was one of the first major American films to focus on gay characters and relationships. It was also the firm mainstream film to use the word ‘cunt’.

Almost 50 years later, the LGBT community has transformed, so The Boys in the Band’s controversial edge has been smoothed to a nostalgic portrait of a lost world – when gay men would gather around for cocktails and dinner rather than fire up Grindr for some H&H action. Perhaps I’m being overly cynical, but what was once the norm is now arguably the exception.

Everything has changed, but everything is still the same – and it’s this quasi-queer-paradox that makes The Boys in the Band so captivating. This is enjoyable fly-on-the-wall theatre with a broad range of same sex male relationships being explored with characters that are more hysterical, gorgeous and hateful than anyone in your phone book now.

Mark Gatiss’ Harold (The League of Gentlemen, Nighty Night) first appears to be the archetypal vile queen over 40 that hates everything – but his sharp-tongued honesty and openness about his own many flaws makes him immensely likeable. I wish that my own vile friends were as upfront as he is.

John Hopkins’ Alan is a ‘straight’, married-probably-closeted (but we never really find out) man with a fuckload of issues, genuinely homophobic – as in, genuinely scared of anything that’s camp and effeminate. He’s a pot of sad passion that simmers and boils over repeatedly throughout. The contrast between his and Emroy’s (James Holmes) level of ‘masc’, with all the others coming somewhere in between, put a giant flaming question mark over what it really means to be a man, and what it really means for a man to love.

Emroy’s hysterical entrance feels like the real ‘start’ of the play – his one-liners are timeless. To be fair, this is a play with a hefty number of brutal one-liners that left us rocking with laughter.

Other performances of note are Jack Derges’ ‘Cowboy’ – the hottest and most stupidest stud you’re likely to come across, and Ben Mansfield’s understated yet evocative Larry.

‘Show me a happy homosexual and I’ll show you a corpse,’ says one of the boys. Sadly, even with so much positive change in terms of equality, self-hatred and internalised homophobia are still a massive issue in the LGBT community – ‘masc4masc’, ‘straight-acting’, ‘no camp’ are all sickeningly common phrases.

The Boys in the Band are, for the most part, pretty horrible to each other. It’s often funny, but as the drama at Harold’s party spins out of control, it gets darker and nastier to the point where we’re not sure if we should be laughing anymore.

At the Vaudeville Theatre until 18 February.

View all posts by Danny Polaris →