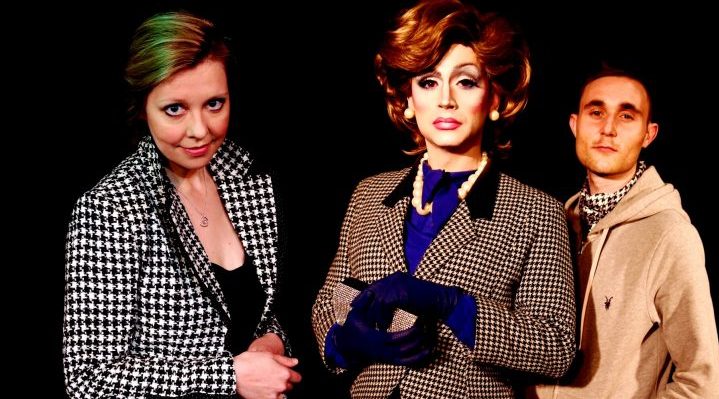 Die Diana is the latest play from Mancunian playwright Stephen M. Hornby. Right from the get-go, I was keen to see this show, which was previewing at the Greater Manchester Fringe, because it combined several of the things I love: the People’s Princess, Lady Diana; colourful conspiracy theories and salacious celebrity gossip; and drag, in the form of Manchester’s favourite alt-queen, Anna Phylactic.

The plot is, depending on your perspective, either non-linear or simply non-existent. What we have, in essence, is a sequence of monologues by characters who think they are, pretend they are or wish they were Princess Diana. First up is the most true to life, not that you’d know it from the outrageous details peppering the script. In this story, Princess Diana has gone under cover, faking her own death to live a life away from the tabloids and then secretly longing to reconnect with her family and the world around her. Many of these stories are based upon conspiracy theories but, if you know your Lady Di lore, you’ll recognise some of the stories as more or less true.

RELATED ARTICLE  Review: The Spa at The Midland, Manchester

The next version of the iconic royal is dubbed Die Anna – that is, the People’s Princess played by Anna Phylactic. There’s a bit of postmodern fun here as Daniel Wallace plays Anna Phylactic playing Lady Di playing the drag version of herself (don’t worry, it sounds a lot more complicated than it is, but there’s more enjoyment when you realise the layers of artifice piled on top of each other like the layers of Dan’s make up). Die Anna is the surviving Diana (seemingly the same Diana we met earlier, but possibly a different Diana from an alternate ‘truth’) who has taken up a career as a professional Diana drag impersonator in order to make money. She is not, she says, quite convincing enough to be herself as a straight (excuse the pun) Lady Di impersonator – to be a drag queen is apparently much easier.

You’d expect this section to be even more humorous, and certainly more frivolous, than the preceding section, but Dan performs the role with a deep and convincing pathos that bubbles through the Illa Masqua poignantly. Yes, this section is indeed flamboyant (even for a show such as this), but the stories are much less outrageous, and are tinged with a dangerous disregard for self that speaks of Die Anna’s loneliness and doubt. There is a rather grim encounter Die Anna relates where Prince Harry meets her, asks to speak backstage and admits he wants to fuck the drag-queen-who-really-is-his-mum. This Diana just wants to spend time with Harry, but of course she can never return to this life she has left behind – and to her son, she’s just an opportunity for a kinky, if creepy, good time.

The third and final version of Diana is a young man who is institutionalised for his delusional mental health problems. He believes himself to be a reincarnation of Princess Diana. He was born at the same moment that Princess Diana died and so he firmly believes that her soul entered him as he entered the world. There she remains as a second personality, slipping in and out of control of his body and his actions. He naturally attributes much of his bad behaviour to the spirit of Diana. We are, of course, supposed to wonder which, if any, of these conflicting personalities is ‘real’ (within the context of the play) or, indeed, whether they all are – in their own ways. This last sequence retroactively solidifies a good framework for understanding the rest of the play and I wonder if it’s a framework that will be developed more in future versions of the play.

Naturally, this being the play in its earliest stages, we’ll see developments and expansions when (and I’m assured it will) Die Diana goes on tour. Even though the play was produced on a very small budget in a very small venue with very little in the way of scenery, the performances alone were enough to carry the audience’s attention for the performance time. Each of the actors drew the audience into their own respective, and shared, worlds. Their particular versions of Princess Diana were uniquely popular with the audience, as the laughter was audible, but the touching moments made for a nice balance between the light and dark until, at least, the very end, where the dark seemed to win. Overall, though, there was just enough Champneys and just enough historical accuracy to make it an enjoyable but political – and very, very British – experience.

My main critique of the play (which is clearly a very well performed work-in-progress, but one with a complex and rewarding script) is that at times the monologues are too dense. There’s a lot going on, and it’s clear that playwright Hornby delights in sharing these scandalous, salacious and sometimes sobering stories, but because they weave together so tightly and in such a compressed amount of time, you sometimes find that you’re halfway through a new incident before you’ve digested the conclusion of the last one. There were times I had to pull myself back out of the experience to catch my breath and remember where I was in the story. This is easily remedied by extending the performance time and allowing the words to breathe onstage.

I have heard from some of those involved that the next version of the play will perhaps see the three performers interweave their stories more closely, so that the three voices move in and around each other, never wholly leaving the stage. This is something I look forward to, as allowing the stories to dart in and out of each other, and to more clearly establish the conceit of multiple personalities and truths vying for dominance right from the start, will make for a more contiguous and rewarding whole.

I look forward to a future incarnation of the fabulous Lady Di – in whichever guise she takes next time.

Di Diana ran at Bandit Mugger and Thief during the Greater Manchester Fringe in July 2016. Watch this space for future tour dates.