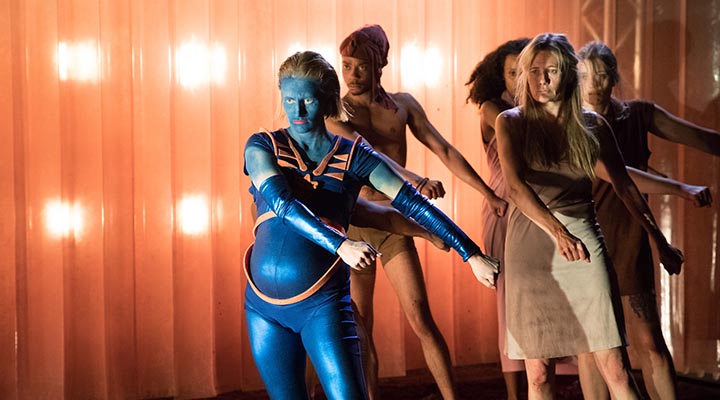 Future Bodies is the latest show from Unlimited Theatre and Rash Dash, showing at HOME in Manchester. With ambitious verve, the show explores what technology and the future hold for the human body and what that means for the loving, feeling, flawed individual. It isn’t always successful, but it holds a lot of promise and a huge wealth of talent.

Though big on ideas and talent, Future Bodies is sadly lacking in story. The first half flits between extraneous scenes with dialogue that seems both sparse yet dense. The scene changes waste a lot of energy and tension by constantly moving furniture for fragments that pack little emotional punch.

When we get to the middle of the show, it all starts to come together. The bitty scenes start to cohere, and real characters begin to emerge. Yes, at times, the dialogue succumbs to jargon – throwing out big words and concepts, yet staying vague about the things that actually matter – but we start to connect with what’s happening onstage at last.

And then . . . it starts to go downhill again. Overly abstract voices – floating in the electronic aether – comment on their dying family member, the only one who chose to keep a physical body, but their technobabble ultimately distracts from the poignancy of what’s taking place. Perhaps this is the point – the physically disconnected entities become emotionally disconnected too – but I wanted to feel the impact of this. I wanted to feel the loneliness of a person dying alone among computer sprites. It seemed like an intellectual exercise instead.

Then, as the end approaches, the performances spiral, a loosely choreographed ending in the dirt representing devolution and chaos, intimacy and isolation, as sophisticated humans become primitive apes. But it goes on for far too long. The ending is a squandered opportunity to really hit home the themes of the show.

The gorgeous music of Becky Wilkie earns the ticket price alone (the soundtrack was more successful than the show itself), and really brings the performances to life. In fact, a science fiction musical about the body, consumerism and the future with music by Becky Wilkie would be a must-see for me – so please, make it!

Textually, the show teeters on the edge of pretentiousness – and sometimes it fails – but when it’s grounded and human, it’s really moving. I could hear the women behind me crying at one point, and I think developing those sections more would have us all in tears together. It was genuinely powerful to see characters lose loved ones despite the immortality proffered by science. It was the brevity of these moments that meant we didn’t have time to engage in the way we should have.

There are a lot of lesser themes merely touched upon, without being given the weight they demand. Indeed, the title of the show itself is quite broad, suggestive of an anthology format – which is probably an accurate summation of what happened onstage. Anthologies are great, but it can be hard to bind disparate parts together.

Consent and privacy are big themes, perhaps unsurprisingly, and these are definitely stronger ingredients in the overall recipe. Though characters at first have agency, able to accept or reject implants and ‘upgrades’, this becomes harder and harder, until it’s almost required. This cynicism creeps up on us slowly and was superbly done.

Pregnancy is also raised a couple of times, and indeed two of the performers appear pregnant. It’s dealt with in rather romantic terms – of biology and pleasure, instinct and human need. But there is no exploration of, say, how science changes the way we might make babies (from present-day IVF to the fictional birthing machines of Marge Piercy’s Woman on the Edge of Time or scientists’ plans to make babies with three parents instead of two – all of these having quite profound impact on the way we understand the traditional biological process of motherhood). I did like the implication, though, that one of these pregnancies arose precisely because of a glitch in the brain implants.

Disability and sickness are mentioned, and this is perhaps where the show is most emotive. I’ll return to this briefly. The scene involving a murderer’s right to be is less successful (mostly because I didn’t buy Deshaye Gayle as a murderer, rather than because of the subject matter itself). 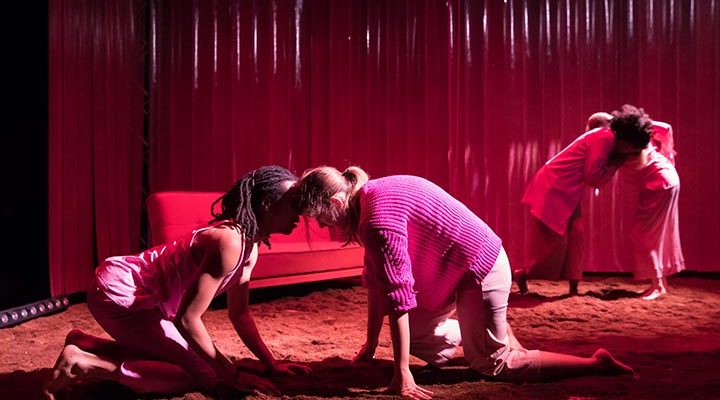 There’s also a supposed focus on the body, yet nearly all of the focus is on the mind – or at least, the brain. How will the mind and the self change if the brain is uploaded? the play asks, several times. I wanted to see more discussion around the rest of the body – where do nerves, sex, limbs, pain, fatigue, taste, smell, touch and so on fit into this world of the uploaded mind?

There are some very admirable pluses, though, in case you think it an entirely negative experience. Firstly, the actors are stellar. I loved seeing local spoken word fixture Yusra Warsama articulate why she doesn’t want her employer to upgrade her brain. The dialogue needs a bit of editing in this scene, but the heart is there and it’s very well performed. The power structure between employer and employee is interesting to see and the twist at the end both sad and satisfying.

I loved Lara Steward’s use of sign language throughout, and the playful way the cast uses BSL and subtitling to impart information to the audience that certain characters don’t have. For instance, there’s a very funny moment where one of Lara’s characters slyly calls another character a ‘c***’ (which is subtitled properly) but gleefully mistranslates herself to hide the fact.

I also liked the representations of diverse families and lives, and the mirroring of those lives throughout the play. For instance, when a lesbian couple talks stage-left, a heterosexual couple enacts the same conversation on their knees through BSL in the other corner of the stage. Both scenes happen concurrently but seem to give different information to the audience – a theatrical split-screen that shows the ambition behind this show.

RELATED ARTICLE  Review: The Spa at The Midland, Manchester

Alison Halstead gives one of the most moving performance of the night, talking about love and loss, and broke my heart for a moment. Likewise, Kate Maravan gave the other – again, about death and relationships. If I only got to see these two scenes, I’d be happy.

Deshaye Gayle was charismatic and versatile, as the only man in the production, and brought some much-needed humour at times. In fact, the role-switching was done well generally, and I was left to wonder whether these are the same recurring characters, or merely different people in similar situations. Sometimes the switching suggests both things at the same time. That’s a definite strength and plays to the idea of this as an expansive story taking place throughout different ages and realities.

There is much that is delicious and worthy, and only really needs more time to develop and refine. With more focus, I feel this could be a really groundbreaking play. The performers could be pushed further, the script tightened up, and the choreography honed to its most necessary components. The music, however, is spot on.

The use of the science fiction genre at times feels clunky. There’s a little too much obsession with the science and not enough of the fiction. This is perhaps as a result of working so closely with scientists, but it occasionally feels more like a vehicle to show off fancy words than it is to grapple with big ideas. There are echoes of A Clockwork Orange, Altered Carbon and Black Mirror, among many others. A dramaturg firmly rooted in the sci-fi tradition might have gone a long way towards grounding the show and avoiding too many unflattering comparisons.

So what’s the conclusion? It’s a mixed result, certainly, but a show full of curiosity that’s genuinely worth seeing. Hopefully, too, one that will evolve – as its characters do – with time. For now, it’s a 3/5, but with some work and refinement it could reach a 5/5.