Jamal Gerald
To some he's a very unusual character. He’s outspoken and loves being in the centre of attention. Jamal just wants his audiences to feel something when reading his work or when they see him perform. Wants them to be fearless when interpreting his art. He wants them to think.@JamiBoii

As a young poet you go through a journey filled with emotion and excitement. Well my journey has, mainly through the challenges of finding my voice as a writer and getting over the fear of sharing my work. It has been one hectic trip. But it has got me to where I am today, writing for the purpose of letting all of my emotions out on the page and the stage.

It all started back in the year 2007 when I participated in Voices of a New Generation (VNG), which is an annual team poetry slam in Leeds. For those of you who don’t know, a poetry slam is competitive poetry. There are judges who mark your poetry for your content and performance from a score of 1-10, but no one should ever get below a 7, that is just pure blasphemy. Through taking part in VNG, I became involved in Leeds Young Authors who are responsible for the competition’s annual running. 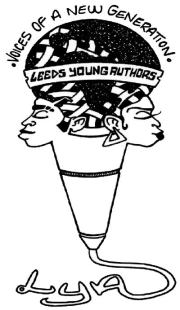 Leeds Young Authors is a creative writing and performance group aimed at youth between 13-19 years of age. There is also a group called Yah Get Mi for kids under the ages of 12. We meet every Tuesday at 6pm at the Host Media Centre in Chapeltown. LYA was created in 2003 by Khadijah Ibrahiim and Paulette Morris. Leeds Young Authors has been representing the country and the city of Leeds nationally and internationally since 2004, particularly at the annual international poetry slam festival Brave New Voices (BNV). I have had the pleasure of attending BNV in 2012 when it was held in the San Francisco Bay Area.

BNV will always be one of the greatest experiences of my life. LYA came 2nd in the world at Brave New Voices 2009 in Chicago out of 50 cities, and also came 1st nationally at the Word Cup National Team Poetry Slam in 2010 (which I was a part of). I have recently joined Young Enigma located in Manchester, another creative writing group aimed at emerging artist who identify themselves as queer. The group was founded by Vada’s publisher, Adam Lowe, who is a writer and poet in his own right. With this group I get the chance to be surrounded by artists once a month who understand what I have been through, as a young black gay man. Because of these two groups I have had the chance to experience some great things. Thank god for groups like Leeds Young Authors and Young Enigma. Without these two groups I would feel lost within the world of literature.

Alongside the support of these groups, I find that I am extremely influenced in my work by the late great Freddie Mercury, the front man of legendary rock band Queen. Some of you may say: “Oh why him?”, without necessarily knowing that he was an incredible songwriter. I see songwriting as a form of poetry. If you read the lyrics to a song without the music it would just read as a poem. He taught me that I should not worry if my poetry is not too clear and that I should let audiences interpret what I mean for themselves.

“People still ask me what Bohemian Rhapsody is all about, and I say I don’t know.  I think it loses the myth and ruins a kind of mystique that people have built up.  Rhapsody is one of those songs that has a fantasy feel about it.  I think people should just listen to it, think about it, and then decide for themselves what it means to them.” – Freddie Mercury

I have also learnt this from studying performance art. It is okay to challenge one’s thinking and for your work to come across as ambiguous. It is okay to be straight to the point, which is something I do quite often, but over time I have learnt if I want something to resonate with someone, it has to be on more than one level. With this in mind, there was a phase where I avoided writing about my sexual orientation. Now it is something that I do all of the time. I write about myself a lot nowadays.

It has been brought to my attention that my best poems I have written come to me at night. The most random thought or source of inspiration can just strike me. I would have to write this down, then that eventually becomes another poem added to my repertoire.

If you are a young poet like myself, make sure you keep writing in anyway you can, although that doesn’t mean forcing it. If something comes to you, and I mean anything, make sure you write it down! You may never know what one line can lead to. If anything is thrown your way  for you to showcase your talents just say yes.

If you’re near Leeds and you’re interested in spoken word, stop by at Sela Bar in Leeds City Centre for The Sunday Practise which occurs on the first Sunday of every month. Also on the 13th of every month there is Dead Poets at Rendezvous Cafe in Hyde Park, Leeds. Both are free entry so I best see you all there!

To some he's a very unusual character. He’s outspoken and loves being in the centre of attention. Jamal just wants his audiences to feel something when reading his work or when they see him perform. Wants them to be fearless when interpreting his art. He wants them to think. @JamiBoii

View all posts by Jamal Gerald →