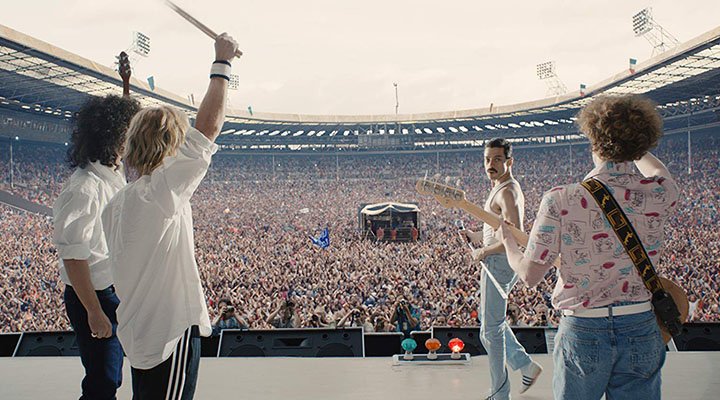 Bohemian Rhapsody is fast becoming one of the most polarising films of 2018. That’s not to say it’s controversial, but even within a single review – indeed, even in this piece – you’ll find equal parts positive and negative.

Ultimately, this is due to the fact that the film tries to do multiple different things at the same time. It’s part Hollywood film, part solo performance, and part tribute. So I thought I’d break it down in these distinct categories for my review and judge each part on its merits.

Bohemian Rhapsody is essentially the story of Freddie Mercury and his rise heading up the rock band Queen, with a few tweaks to the timeline to provide a neat narrative arc. It’s largely a positive take on the band’s heyday, and stars the rapidly rising Rami Malek as Mercury himself.

Directed by X-Men‘s Bryan Singer, Bohemian Rhapsody is about Queen’s rise to prominence, specifically in the lead up to the legendary 1985 Live Aid show in London. It focuses largely on the character of Mercury, and how he effectively took over the band and drove them to international success, turning Queen from a promising rock group into a sensation through willpower, talent and daring.

One of the main criticisms of the film, however, is that it paints an almost unrealistically clean picture of the band. That’s not to say it was a total whitewash, but there are some details that were left out to protect the group’s legacy as a band.

That, at least, is why Sacha Baron Cohen claims he pulled out of the lead role in 2013, paving the way for Malek. Cohen wanted to create a fuller depiction of the band’s history and let audiences judge the most authentic picture for themselves – include the good, the bad and the ugly.

The band’s decision to focus on a sanitised version of its history is somewhat regrettable for those who value authenticity, though it’s not a deal-breaker. There is plenty of truth in Bohemian Rhapsody and the film perhaps attempts to take a wider view, so that there isn’t really the time to focus on the many rumours and legends surrounding the band members (and Mercury, in particular).

Arguably, it’s also a matter of taste and sensitivity: this is about preserving the mythology of Mercury in a positive way, rather than being salacious and casting aspersions on his character. The 80s and 90s tabloid representations of Mercury still seem distasteful to his band members, who knew the real man, and so it’s certainly a positive thing that they want to protect him and do his memory justice.

There are of course many other fine actors involved in this project, but by ‘the performance’, I’m referring to the one by Rami Malek.

I could fill paragraphs with escalating hyperbole describing the sheer brilliance of Malek’s work on this film, but I’ll avoid all that and simply agree with most of the world that he was otherworldly. And while some would prefer to have heard him try more of the singing himself, the simple fact is that Mercury was a rare vocal talent, and it’s best to hear his voice through Malek’s lips.

Plus, Malek gets every last twitch of the character right, embodying the persona rather than attempting to imitate the voice.

Malek also deserves some credit for the film’s climax, which is a stunning recreation of the aforementioned Live Aid show. Just as Sacha Baron Cohen had his own demands for the role, Malek insisted that this show be filmed in one take, and effectively turned it into a moment-for-moment recreation of one of the most famous concerts in history.

More even than it is a Rami Malek showcase, Bohemian Rhapsody is a tribute to Queen, and queer singing sensation Freddie Mercury above all.

Lately we’ve actually seen quite a few attempts at meaningful tributes, but Bohemian Rhapsody stands above just about any other major musical tribute in recent memory.

Some ageing rock groups from Queen’s era have cashed in on their fame, licensing their material out to increasingly cynical merchandise opportunities, including the large selections of different games now offered by mobile casinos.

Other groups that are down a member have worked with some of their contemporaries to recreate the glory days, with the most noteworthy example being Guns N’ Roses’ Axl Rose singing lead for AC/DC. And sometimes we simply get a documentary or a smaller-scale film based on an old artist or band.

Bohemian Rhapsody, purely as a Queen tribute, blows all of these ideas out of the water. More than a few people have described it as basically being a two-hour-plus cinematic rendition of the band’s greatest hits, such that plotting, accuracy, and even acting aside it’s just a really fun opportunity to hear the band at its best. And that’s hard to be negative about.

But there are historical inaccuracies.

Though Mercury sells out his bandmates in the film (which didn’t happen in reality; they started working on solo material before he did), this is clearly a poetic conceit to show the character’s growth and change. Screenwriter Anthony McCarten had to create a satisfying plot, and so some of the events are shuffled around, re-prioritised or exaggerated for dramatic effect.

Malek manages to capture some of the singer’s spark in the movie, and injects a lot of heart into the film – though, perhaps, he comes across as a little too naive and childlike at times. Ultimately, though, where the film is strongest is when it lifts up and celebrates its protagonist: Freddie Mercury. The ending, where the band takes to the stage at Live Aid, is a riotous moment for the audience and a fitting tribute to Farrokh Bulsara, AKA Freddie Mercury.

RIP, Freddie. You were and always will be a star.