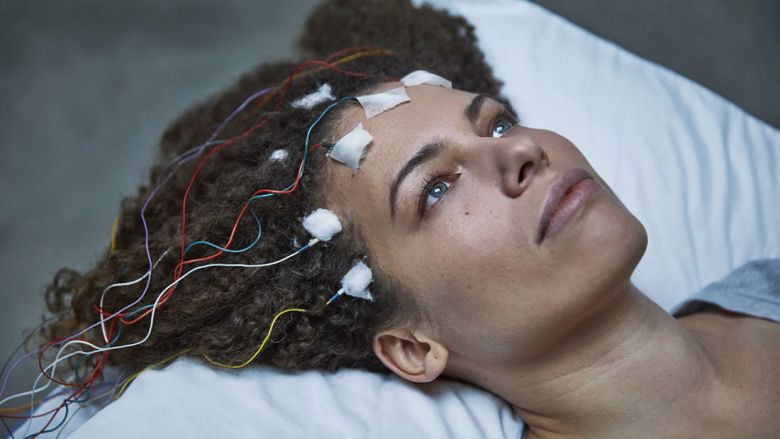 The documentary Unrest (director: Jennifer Brea) is an honest, intimate film that speaks one woman’s truth about ME/CFS. By turning her camera on herself, former academic Jen captures what everyday life with this stigmatised illness is like, and does so with charm, humour and hope.

I recognised so much of myself in this, as an ME patient, and recognise similarities with the struggle of HIV campaigners in years past. Our LGBT story feels like part of the same fight for the right to healthcare, regardless of politics (see my digression below for more on this).

Ultimately, Unrest left me thankful that I’ve got a great network of people around me, and have learned so much from online support groups like Jen. There are those who would incarcerate us for not playing along with outdated models of hysteria and somatisation.

But we’re a force to be reckoned with, and I’ve never met a more informed or switched-on patient body than people with ME. It’s also interesting to me that many of the researchers and human rights campaigners picking up the fight right now are also queer!

Without my fellow people with ME, I’d be much worse physically and emotionally. Other patients have signposted help and support, and have raised the bar in discussions of the science behind ME, generally.

I also think LGBT activists have much to share with ME campaigners, and vice versa.

Jen’s journey includes stories from around the world, and keeps circling back to the medical abuse many people with this disease have faced and continue to face. What’s clear is that this is a fight for justice as well as healthcare – it’s about the right to be heard and believed.

In this documentary Jen’s given us a rallying call. Something we can show to friends, family and clinicians to help them see and understand. Even our politicians have been invited to see this (it was shown in Parliament last week to an enviable turnout).

There’s a real sense of a tide-change – of things getting better, people taking notice, and our voices being respected as reliable testimonies of our own experiences.

This film is a moving tribute, but it’s also a subtle battlecry!

A digression on LGBT rights and ME

Interestingly, LGBT viewers of this documentary may note the similarities between the struggle of ME patients and those of previous generations who fought for proper treatment for HIV.

Indeed, Peter Tatchell has been outspoken in connecting the dots between the proponents of electric shock ‘aversion therapy’ for LGBT people in the past and the early proponents of psychosocial treatments for people with ME (Dr Isaac Marks is the common link).

Isaac Marks moved from aversion therapy to a trial of CBT for CFS. Why was he still respected? Lessons not learnt. https://t.co/gphBFIhWaP

The connections between these groups casts a rather sinister shadow over those parts of the film where psychiatrists incarcerate disabled people simply because ‘this is more interesting’ to them than looking at biomedical treatments.

Also raised is the valid question of misogyny: are ME patients patronised and maligned because most of them are women?

The answer is probably yes, to a degree, but there are other controversies that the film doesn’t go into as well (doctors who deny ME also deny Gulf War Illness and other diseases where government culpability may rear its head).

Like LGBT activists, some ME patients are unspoken and passionate in their fight for justice. And, as those of us who’ve campaigned for LGBT rights recognise, a common tactic of those who would oppress us is to dehumanise, discredit or lie about us. But Unrest perhaps shows that things are beginning to change at last – and we will stand on the right side of history.