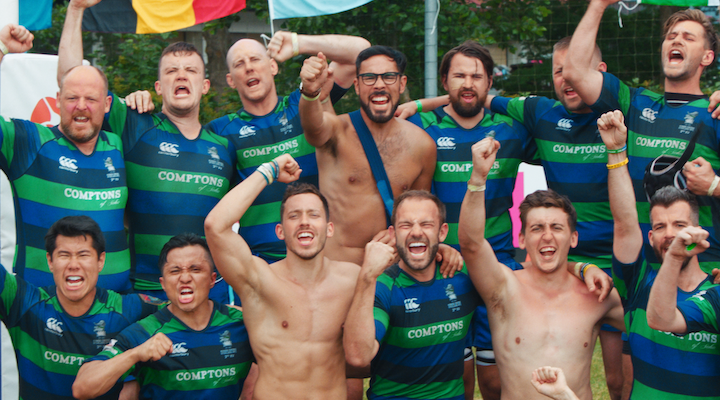 Steelers, a feature-film length documentary about the world’s first gay rugby club will premiere at the BFI Flare: London LGBTQ+ Film Festival in March. For those not familiar with rugby, Steelers is a gay rugby club in its 25th year, with Nic Evans as coach.

The documentary is told through the eyes of narrator, writer and director, Eammon Ashton-Atkinson, who shares his story of the rugby team providing him succour through his own battles. Steelers follows three characters on their journey to overcome their struggles as the club competes against 60 other gay rugby clubs in the Bingham Cup in Amsterdam – the World Cup of gay rugby:

Steelers started as 6 men in a bar in Kings Cross London in 1995 and there is now a global community of thousands. Club president Matt Webb states “This is something we are incredibly proud of. We know our sport and clubs provide both a great rugby experience but have also literally saved lives for those feeling lost and without a home around the world.” He goes on to commend the documentary for highlighting the essence of the club.

Ashton-Atkinson is thrilled the documentary has been selected in BFI Flare, and his wish “is for this film to give hope to others who may need it, not just those struggling with their sexuality, but anyone doubting themselves.”

Screenings are planned for 25 March and 28 March, with tickets going on sale from 27 February. For full information on Steelers screenings, cast and crew biographies visit steelersthemovie.com.