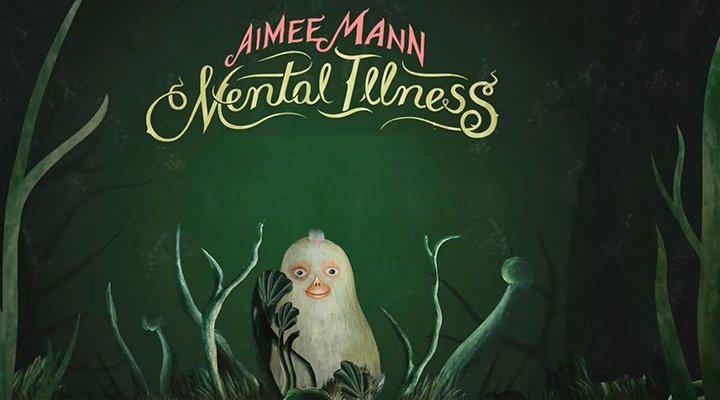 Fans of Aimee Mann will take anything she throws at them, greedily and with little complaint. But to stand back and objectively evaluate the Boston based singer-songwriter’s work, Mann has not released an album since 2002’s Lost in Space, that ticks all of the boxes that, if they were to honest, so many of her followers crave. This doesn’t even take into account the non-affiliated, casual listener who Mann is disappointingly in danger of not reaching such is her established niche. Mental Illness, her ninth album as Aimee Mann, sees the artist herself take the position of the super-fan and imagines what their fantasy Aimee Mann full-length would sound like, and in doing so has made a record that will appeal not only to the devoted, but universally.

Aimee Mann’s sound is timeless, unfashionable and immediately recognisable as her. She veers from a fuller, guitar folk-pop sound to starker, but often lushly imagined, piano and strings but its genre is mostly rooted in (eek!) easy listening. Her consistent strength is that of a master songwriter who infuses each release with hooks that tightly grasp and themes that find her singing through portals of male and female despair and hopeful redemption and recovery. Mental Illness as an album title then, is Mann going meta, acknowledging out loud that this is a condition that many associate with her and her art, and love her for it.

‘Stuck in the Past’ and ‘You Never Loved Me’ both sparkle lightly and are at odds with the literal names applied to them and which befits their subject matter. There is rarely a moment on Mental Illness that is morbid musically – sad yes, but the depression that Mann sings about does not seep out of the tracks and into the listener. THe swooping strings and circular vocal melodies of ‘Simple Fix’ are more assertive and highlight the repetitious frustration of the protagonist’s situation ‘here we go again – we just become our worst mistakes, the anecdote that no one takes’. Philly Sinks talks about addiction and small towns, a theme visited again and again by Mann at various stages of her career.

‘Good for Me’ is one of only two songs, the other being the looser and more free-flowing ‘PoorJudge’, where Mann shares vocals with a dominant piano performance and in doing so revisits and reasserts herself as a champion of this genre within a genre. It may not have the theatrical sweep of ‘Wise Up’, the ballad used to surreal effect to identify the emotional breaking and turning point in Paul Thomas Anderson’s Magnolia, but it doesn’t have to when the song and Mann’s typical, precise but understated performance is so strong. Aimee Mann is aware that music is medicine of a kind, an unquestionable mood enhancer be it up or down and although she never be so arrogant to claim herself as some kind of cure, Mental Illness acts as a barbed balm of reassured companionship.