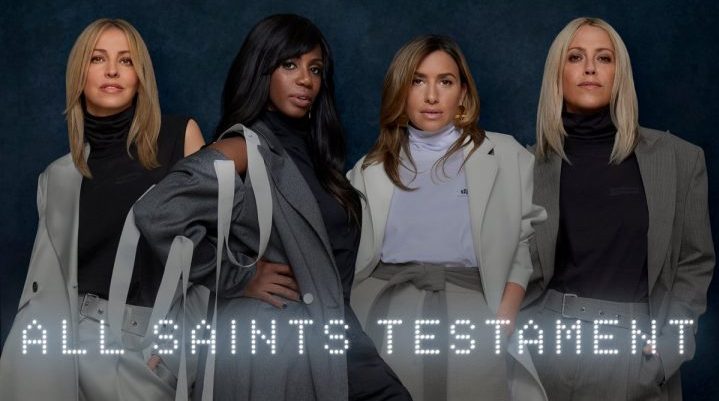 The last time I wrote about All Saints was 2 years ago when their Red Flag album was released and I speculated on how difficult the album format can be for a girl and boy band, a genre that survives by the strength of its singles sales. Red Flag didn’t break this mould and neither unfortunately does the group’s fifth album Testament; an album that has obvious highlights that make it all the more frustrating that at least half of the record slips into admirably adventurous, but ultimately mediocre, underwritten songs and muddled production.

Fans of the group, and Testament is a record that thankfully does play to the band’s known strengths, will still find much to enjoy here and other listeners may peek in out of curiosity but truthfully, there is little to entice newcomers.

Shaznay Lewis has credits on many of the band’s songs and is co-writer of every track on Testament. She is an accomplished songwriter and has a keen knack for irresistible hooks and an obvious awareness of how to write for four singers. Songs like ‘Love Lasts Forever’, the effervescent but disposable first single, bring the women’s harmonies together in a way that will make long-term followers swoon.

Much better is the soulful tug of ‘Don’t Look Over Your Shoulder’, a song that reveals its clever melodies with each subsequent listen and is an artful rewrite of the classic girl-group ‘I’ll be fine without you’ trope. Lyrically ‘No Issues’ may fall somewhat short of the mark, but its tense and aggravated mood is contemporary and appealing.

Prominent producer in the late-nineties and best known for this work on Madonna’s Ray Of Light album, William Orbit returns to work with the group after producing two of their biggest hits with ‘Pure Shores’ and ‘Black Coffee’. In some respects Orbit is partially to blame for the unevenness of Testimont. He only produces two tracks on Testament, the immediately identifiable blueprint of his sound on ‘After All’ and light/dark switching of ‘Testament In Motion’ but both successfully cement the group’s sound into sharp nuggets of pop joy. There is such an obvious chemistry between Orbit and the band which allows them to experiment and flourish whilst bringing out the best in them to such an extent that you crave a whole album of them working together.

Let’s look forward to the next All Saints Greatness Hits collection where these tracks deserve a place next to the ladies’ best.