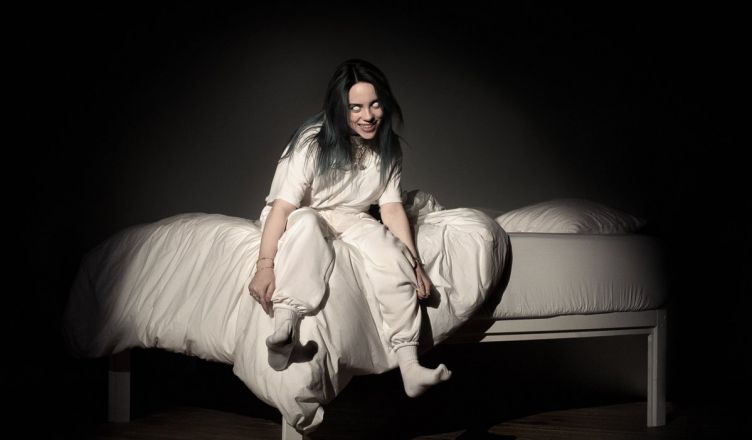 Billie Eilish presents herself as a smirking goth-kid on the cover of her long-awaited debut album WHEN WE ALL FALL ASLEEP, WHERE DO WE GO? and with pin-sharp precision this image also perfectly encapsulates the sonic sensibility of the 17-year old mega-sensation.

Billie Eilish comes fully formed and ready to dominate. Over a relatively short period her sound is instantly recognisable as her. It’s true that this differs from being wholly original but is a considerable achievement in itself as is Eilish’s notable and commendable decision to stray musically from the current crowd of big-hitters.

There is also a heightened and macabre, sometimes cartoony, element to her more uptempo tracks (including samples of the US version of The Office) and the only surprise to the uninitiated might be Eilish’s propensity for a folky acoustic ballad or five.

Spooky trap and hip-hop beats are nothing new but both the superb, earlier single ‘See Me in a Crown’ and more current ‘Bury a Friend’, both featured here, trade on an eerie and often repeated aesthetic that makes great use of complete silence, sound effects (knives being sharpened, wheezes, squealing brakes) and plunging bass-drops that will make your teeth grind.

Eilish’s vocals are serpentine and menacing, and on these tracks in particular, humour is successfully kept out of the frame. ‘Xannie’ combines both the sharp chill of these tracks with the more humane warmth of her ballads, which – coupled with the cynicism of a 17-year old not actually wanting to pop a Xanax, thanks – ensures the track successfully moves into a more diverse sound than expected.

The ukulele, harmonica and pitched-up vocals of ‘8’ may be a step too far in the direction of twee but the three-track run between ‘My Strange Addiction’, which is the album’s chunkiest and most straightforward dance-pop offering, and ‘Bury a Friend’ is faultless and thrilling.

It’s a shame then that the triptych of ballads that bring the album to a close are so insipid and seemingly out-of-character for an artist that has triumphed on building such a sturdy, boisterously inventive persona so quickly. Earlier in the record, Eilish succeeds with the beautifully harmonised and melancholic ‘When the Party’s Over’, true – and since putting out music she has always had big, slow songs as part of her repertoire – but these tracks are so vanilla that they drag the final run of the album down to a mushy crawl.

Billie Eilish is a new and very young artist, though, and her talents are without doubt considerable. Even without the aid of any big-name writers and producers she has, along with her producer brother Finnea, created the entirety of her debut herself. It will be interesting to watch her next move and the impact that she will make but for now WHEN WE ALL FALL ASLEEP, WHERE DO WE GO? is one of the most thoughtfully creative and self-possessed albums of the year.