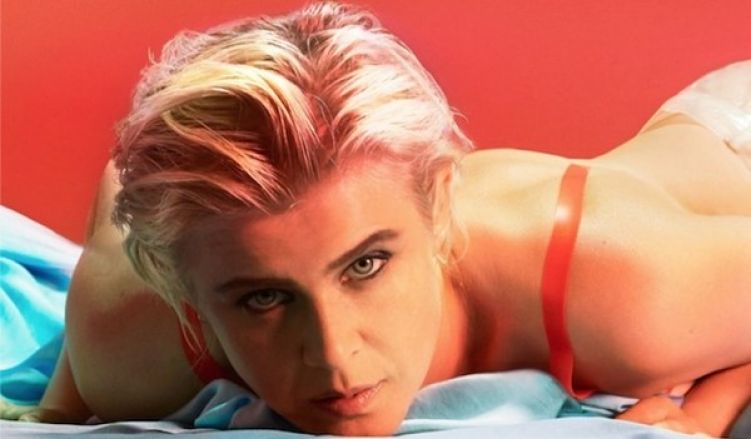 It’s fair to say that ‘Missing You’ and ‘Honey’, the first two songs previewed before the release of Robyn’s first album in eight years, only partially represent the content of this massively anticipated record. Both of these tracks have a lyrical and structural familiarity that link back to her most recent albums, Robyn and Body Talk. The tone of these new songs has changed though and a warmth and less-threatening fluidity replaces the more taut precision of earlier classics.

Honey only consists of nine tracks with ‘Missing You’ and the title track the most accessible and immediate – songs that still sound like the Robyn that has become one of the most inspirational and interesting pop stars of the last three decades. The remaining seven songs are more experimental and oblique, sometimes with exceptional and fascinating results, at least when occasional purist indulgences are kept in check.

Another musical red herring is ‘Human Being’, Honey’s second track and its best song. Bridging the gap between ‘With Every Heartbeat’ and ‘Monument’, 2005 and 2014 collaborations with Kleerup and Royksopp respectively, Robyn reconnects and expands on the cool, steel electro-pop that is only warmed, intermittently, and bought back to life by her devastating humanity. ‘I’m a human being,’ she dictates throughout. Meanwhile, a repetitively chipping and looping beat churns beneath her, only to occasionally cut away, leaving a lonely, disturbing drone. It’s a wondrously beautiful and modern piece of music. Its expertly crafted melodies lift it out from the darkness with Robyn’s constant insistence from throughout her career that only dancing will make things better.

RELATED ARTICLE  Give It a Listen: Robyn and FKA Twigs

There is nothing else on Honey that sounds anything like ‘Human Being’ and which by all accounts is an instant, classic Robyn song. It is unexpected, immediately captivating and immaculately executed pop that bucks conventional trends and, importantly, could only be her. This is the magic recipe of all the big hitters from the last 40 years or so, and one that many have failed – and not through lack of trying – to get right or even get near.

The rest of Honey dispenses with the preciseness of song structure that is so apparent in ‘Human Being’ and Robyn has said when speaking about this record that the last thing that she was interested in was melody. While a lot of the album might still be hooky, there is a definite shift to experimenting – disrupting the formula of what a pop song might sound like.

‘Because It’s in the Music’ is a type of disco song that has its disparate elements placed very far apart from one another – one placed carefully after another until a wall of sound is created. Dancefloor euphoria is the end game. Robyn is happy in this song. The percussion sparkles so brightly, a bassline and strings elegantly come in and out of view, and an Oriental synth motif reminiscent of ‘Merry Christmas Mr Lawrence’ draws the most attention of all. The production of ‘Because It’s in the Music’ is faultless and ingenious. The space that it creates within the track’s grooves also allows for a feeling of menace to creep in towards the end and the short coda which completes the song suggests disorientation and sadness. You would never hear this song in a club, though – it’s too fragile and ornate to inspire any kind of abandonment but it masterfully succeeds in its own sonic contradictions and subsequent feeling of confusion.

RELATED ARTICLE  What's on Your Playlist Round 2: Jake Basford

‘Baby Forgive Me’ is a gauzy, warm throw of a mid tempo that, after a repetitive 90-second play-out, segues into ‘Send Immediately to Robin’ which continues the mood as a marginally more frisky second act. Incorporating an element of Lil Louis’ ‘French Kiss’, slowed down and only appearing in the song’s second half, this two-hander is sensual, certainly, but there is little that takes it much further than surprisingly polite, sleepy filler.

For many, ‘Read Between the Lines’ will be The One. The only track that has attitude and dance-floor immediacy, and which takes from Robyn’s past, ‘Read Between the Lines’ is a super-charged blast of 90s’ house music nostalgia. Like its weird disco sister, ‘Because It’s in the Music’, the production is diamond sharp and full of space; you won’t sweat dancing to it necessarily but it will make you smile and move your arse long before you’ve even realised it.

Many will probably try to over-intellectualise ‘Beach 2K20’, mainly to try and rationalise why Robyn would include such an insipid piece of retro, ‘chill-out Ibiza 2003’. On a nine-track album where every fan-girl minute counts, almost six of them are wasted here.

Moving on, Honey’s final song ‘Ever Again’ is wonderful. Produced by Joe Mount, it does in fact resemble Metronomy’s own sound (Robyn guested on their last album, Summer 08) and is a minor-key, introvert attempt at an upbeat, positive anthem. What is achieved is a quietly joyous and genuinely moving ode to love and loving that follows a period of profound loss.

There is no doubting that Honey is a very personal record from an artist that has gradually and notably refused to comprise in an industry that seemingly embraces individuality and creativity, but only up to a point. Robyn is taking bigger risks and for her fans this may make for occasional disappointment, but her enduring curiosity, love and gentle subversion of music is never once in doubt.