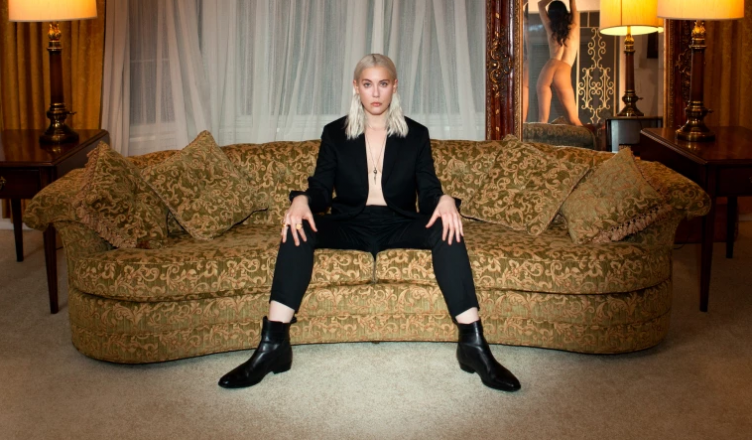 Three Futures is the third album by Torres, aka US singer-songwriter Mackenzie Scott. It’s a departure of sorts from the wild-eyed chaos of 2015’s Sprinter and also one of the most meticulously realised and crafted records that you will have had heard for a while.

A celebration of Scott’s newly-discovered joys of experiencing her own body, physically and politically, this is not exactly the most original concept for a music release. Thankfully, though, Torres avoids the cliches already associated with the seemingly omnipresent theme of self-love which, more often than not, ends up in a confused state of shiny, Instagramed narcissism.

The album cover features a naked woman but she’s to the side and in the background with a centrally placed Torres in a suit, manspreading to her heart’s content. Which one are you looking at?

There is something both muscular and lean about how this record sounds. It seems almost perfectly symmetrical in its musical structure and resists any unnecessary diversions to make you feel less overwhelmed by its precision. There are long and luxuriant instrumental outros and spacious interludes where more detailed sounds appear to be hovering above sparer outlines. But this isn’t an airless and cold showpiece. Scott’s immense, commanding vocal presence is central to the record’s humanity and power. Patronising, hostile, ecstatic, dictatorial and humble; her every word is audible which makes the abstract nature of the some of the lyrics here even more puzzling and magical.

Tongue Slaps Your Brain Out is a buzzing, guitar-backed red herring of an opener. Sounding like the lead-off to an album which implies it will carry on where Sprinter’s blues-rock left off, this bleeds into the similarly yowling Skim and both tracks are nonchalant but weighty continuations of Scott’s previous musical style. ‘I got hard in your car, in the parking lot of the Masonic Lodge,’ the singer informs on the title track and establishes the dreamy, drum machine click sound of something new, all synth washes and percussive ticks and bleeps.

‘Righteous Woman’ continues in the same vain and alternates back and forth between smooth and then backed-up, jarring vocal melodies and chilled soundscapes. ‘Next time in you’re in the city, if you should decide to call me, remember that I’m dealing with flesh that’s far too willing,’ Scott warns a potential lover – you best be up to the job as there is no shortage.

‘Bad Baby Pie’ is Torres’ boldest pop-song yet, electronic and dramatic it tells the story of a break-up date with Scott cast in the tragic role of the one being tossed aside. Clothes though are hastily dispensed with, bad-for-you food stuffs are consumed and cutlery is somehow given the blame. It’s a glorious and sensual pile-up of gourmand metaphors and again puts Scott very much in pleasure-control of her immediate situation. Helen in the Woods is a lone misstep that plays too much into ripe melodrama and women who are ‘not right in the head’. The spareness and deranged first-person narrative strives to sound like PJ Harvey during her under-appreciated Is This Desire period, but this should be avoided when the song is not good enough and the vocal similarities between the two are already sometimes too close for comfort.

‘Concrete Geisha’ fools with a distant, tinny hi-hat intro before it layers on the guitars which eventually collide with distorted, exploding synths and pile up on top of a languid bassline, quietly looking on and paying little attention to the surrounding destruction. The pitter pattering micro-beats of the album’s manifesto piece, ‘To Be Given A Body’, provide the outline on the teasing, just on-the-brink of unfurling but actually very tightly controlled eight-minute suite. ‘To be given a body is the greatest gift…drowsy on the ski lift, laugh till I can’t breath’ Scott quietly intones, in awe of her day’s occurrences and the taken-for-granted physicality involved.

Comparing this elegant, minimal and confident electronic music to her earlier, more technically and socially rawer material may mean that Torres alienates some of her fans that she has picked up since her 2013 debut. Like Fiona Apple, PJ Harvey, St Vincent and Bjork, artists that exist on their own terms and outside of any expected or currently dictated rules, Torres is the kind of artist that has begun to create an entire universe of feelings and motifs that orbit around her music. She may sound different again next time but for now Three Futures is Torres’ current home, and we’re lucky she’s invited us in.