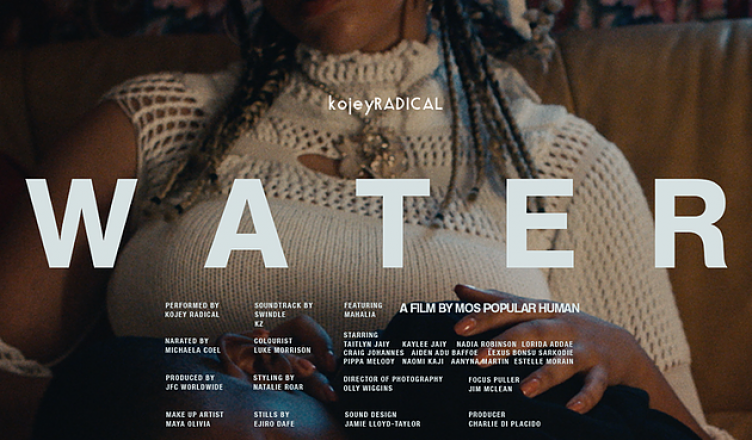 My first time seeing Kojey Radical was last year during MIF festival. My second was 5 months later and since then I’ve been an avid fan of their work and narrative.

Kojey sees himself as a poet first and rapper second. In his new single ‘Water’ his words tackle ideas of race, masculinity, poverty and social injustices.

The track (produced by Swindle) has incredibly delicate samples, with layers of electric guitar. It utilizes a great bass line and hi-hat, which brings the modern elements to an otherwise jazz-inspired track. Bringing Mahalia, rising Birmingham star as a feature was a great move – two great artists with great sounds.

Kojey Radical has released a nine-minute film for the single, narrated by Michaela Coel – who recites lyrics from another Radical song SUPERHUMAN.
“I watched my peers walk a path far different to mine and grew more confident with my own solitude/ politics, love, manhood and sexuality I discovered like a blind lamb in the hands of a unfamiliar shepherd.”

This short film is a wonderful insight into Kojey’s artistic visions and his explorative nature on issues like gender roles. In his Instagram post promoting the song he writes: “…it’s always been our aim to push the boundaries of our creativity. I was luckily enough to be raised by a family of strong females – Craig, my director, also – and we wanted to make a visual that was heavy on representation not only just for women but also to create and elaborate on conversations on black masculinity. And how we connect and understand each other as genders. For us, an untold story is easily one of the biggest burdens one can carry and we really want to use our creative voices to tell as many stories as possible. I hope people find their own meaning within this visual. Not one dictated by me. And ultimately I hope that you enjoy it.”

RELATED ARTICLE  For Books' Sake @ Queer We Are - Preview

As someone who has left music alone recently, this single for me is something I haven’t been able to turn off due to the bassline alone – but also the refreshing nature of its commentary. I look forward to his new work and the genres he’ll be playing into.

View all posts by Billie Meredith →