I don’t think I’ll ever be able to hear these three words in the same way again, and it’s a phrase that you hear all the time. But hold the door will forever have deeper connotations for Game of Thrones fans. The sixth season is continuing to excel on every single level and I honestly think it’ll go down as the best series thus far. 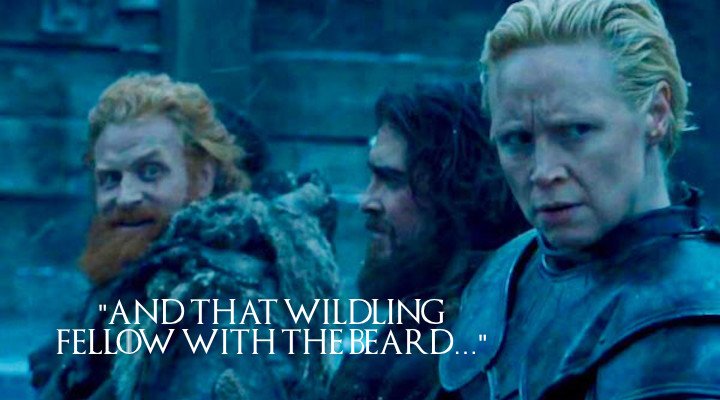 Can I just talk for a moment about how much I am shipping Tarthbane? I’ve seen so many memes about the surprise pairing of Brienne and Tormund, the best of which is simply: ‘still a better love story than Twilight‘.

It’s been confirmed that this relationship will progress, and I for one cannot wait to see it unfold. Brienne’s story had stalled at the end of season four, but in season six, firstly with Sansa accepting her pledge and secondly the blossoming relationship that has been dubbed Tarthbane, I’m starting to enjoy her as a character again. It’s about time!

RELATED ARTICLE  OMGame of Thrones - The Wars to Come

THIS is how you do a new storyline 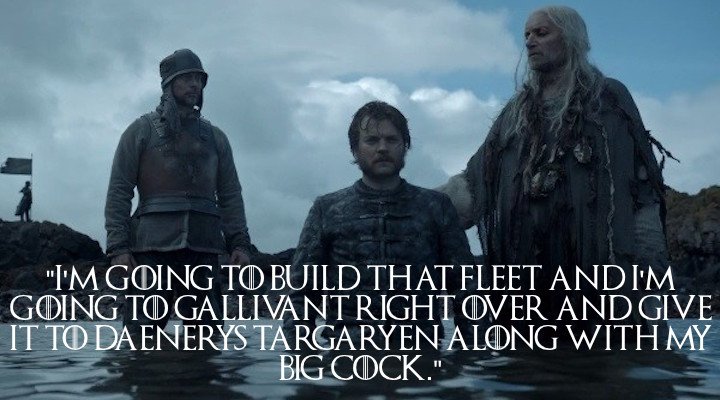 It’s generally accepted that the Dorne storyline of season five was shit. No other word for it. But the Pyke storyline of season four has been exceptional so far. As a book reader, this adaption is just perfect. It’s been slowly burning since season two with fleeing glimpses from Yara and Balon Greyjoy, but now the Greyjoy’s are out in full force, and I couldn’t be happier!

Joining Yara and Theon (it’s so GOOD to see Theon refer to himself using his actual name for once) are Euron and Aeron, the former of which has triumphed at the infamous (and brilliantly adapted) Kingsmoot, whilst the latter performs the deed of drowning him. It looks as though Victarian Greyjoy has been dropped from the show unfortunately.

It’s going to be very interesting to see where this story goes. Then has just left Sansa and reunited with Yara, so I genuinely have no idea where they’re gonna flee too. As for Euron? I honestly think the final shot of season six will be Dany and her Dothraki finally setting sail for Westeros, so perhaps Euron will meet with her sooner rather than later. 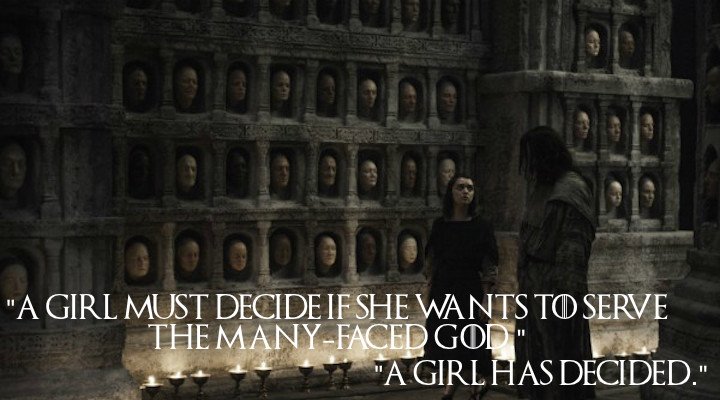 It’s great to see Arya’s storyline progressing nicely, too. Her blindness storyline was completely unnecessary and I am glad to see that she is about to become somebody new entirely once more. It’s nice seeing Maisie Williams taking on these varying roles, and I’m sure the next one will be just as good as Cat.

What was also a surprise this episode was some mythology about the Faceless Men, though Jaqen H’ghar’s insistence that Arya be no one is going tiresome. How many times does she have to tell him?!

The origin of the Others 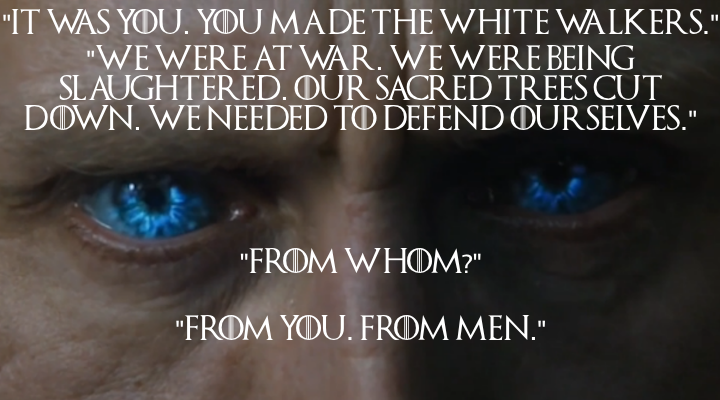 Well this came out of nowhere, but it completely makes sense!

The Children of the Forest seemingly created the White Walkers, but with the Children now apparently extinct (more on that in a moment), it remains to be seen whether there’s a power capable of stopping them. Certainly the Children, in particular Leaf, didn’t seem to possess enough power to stop them, suggesting that their creation has got out of their control.

I like this explanation about the White Walkers. It shows that they’re not just a cheap imitation zombie, and that their reasoning for fighting living men has a cause – because the living men were warring with the Children. I expect more mythology to follow imminently. 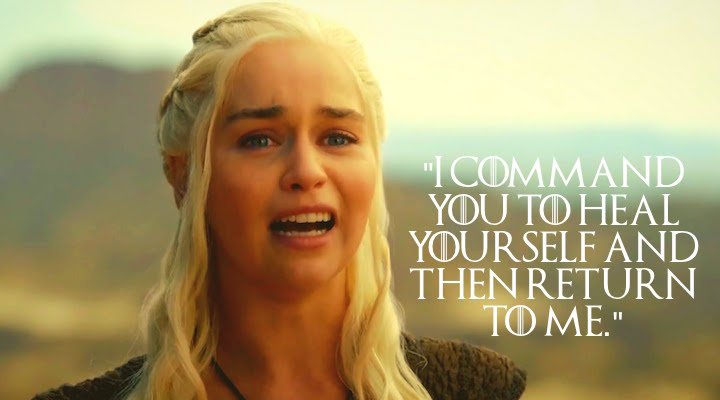 Whether Jorah lives or dies, I don’t care. One bit.

But this scene was brilliant because it showed a vulnerable side to Dany that is distinctly lacking in most episodes. This was her caring for a solitary person rather than a cause or a city, and it made a refreshing change. I think Jorah will sacrifice himself later this season to protect Dany… and frankly, I hope that’s the case. 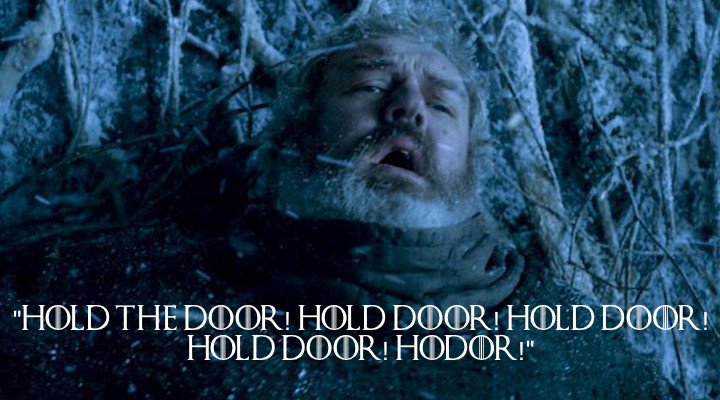 Ah, Hodor. There are simply no words to describe this final sequence other than stunning. In showing Hodor’s fall into a simpleton, we’ve learned that Bran can and has influenced past acts – whether knowingly or by mistake. I wouldn’t at all be surprised to find out that Bran is the cause of a major incident that has occurred over the past five seasons – perhaps he’s the reason Dany was sold to Drogo, or perhaps he is Varys’ ultimate ‘little bird’. I also expect Bran to visit the infamous tower scene from the very first episode, and discover just how and why he was thrown to the ground.

But back to ‘The Door’. It’s heartbreaking to realise that Bran is the cause of his best friends disability, and even more heartbreaking that Hodor will likely know this, after all he seemed to lock eyes with Bran in the vision. But he’s followed Bran regardless.

The final sequence in which we saw Hodor’s demise in the present, and his incessant rambling in the past, was utterly compelling, and I couldn’t even blink, let alone take my eyes from the screen. Farewell Hodor. I don’t think anybody has been this shocked about a death since the Red Wedding.

But where does this leave us? The White Walkers are advancing quickly on Bran and Meera, and there is only so long that Meera will be able to drag him. Bran will undoubtedly die.

Enter Coldhands. For me, there is simply no other way that Bran will be able to get out of this predicament. I won’t spoil who Coldhands is, but if he appears it’ll be the greatest shock in Game of Thrones since, well, since Hodor died.