Game of Thrones is really dishing out the twists, isn’t it? Following that colossal reveal about Melisandre last week, ‘Home’ saw the death of not one, but two characters, and the long awaited return of Bran. Maybe, just maybe, he’s gonna be interesting now.

A lot happened in ‘Home’, but it’ll be remembered solely for that final shot. Spoilers to follow.

Tyrion drinks and he knows things 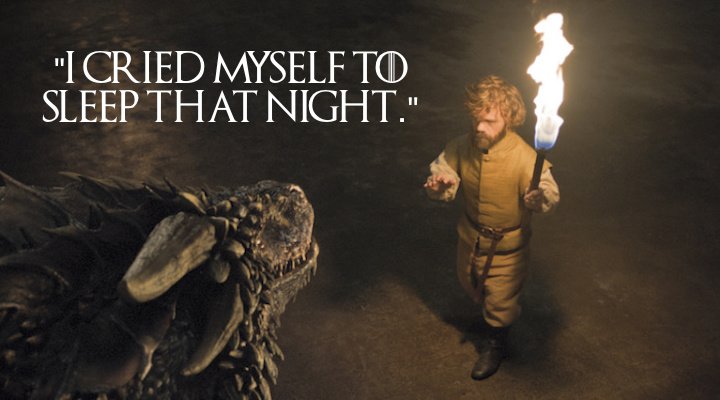 The story Tyrion regaled to the two shackled dragons was an utter joy. It was needed. I know Tyrion is a huge fan favourite, but he’s been a bit of a dick recently. Drinking, cracking jokes, stabbing Jorah in the back… this scene here helped bring some empathy back for the Imp – for me, at least. It’s always a delight to see how characters react to the sight of dragons, and Tyrion did not disappoint. This moment was one he had longed for all of his life. 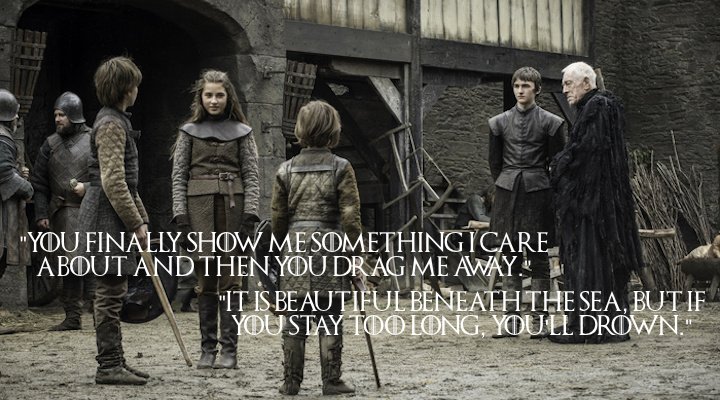 My, Bran has grown, hasn’t he? And that isn’t the only change beyond the Wall. The Three-eyed Raven has been recast, and the Children of the Forest have had a radical redesign. The new look is gorgeous, though. It truly captures the description from A Song of Ice and Fire.

But back to Bran. He’s travelling through time, and witnesses his late father and uncle (Benjen Stark – remember him?!) sparring in Winterfell. I have a feeling they’re going to elongate Bran’s one chapter of dreams across the entirety of season six to divulge more about the history of Westeros. After all, next week we’re going to see the Tower of Joy and maybe, just maybe, we’ll finally find out if R+L=J.

Cersei is REALLY having a bad time of it of late 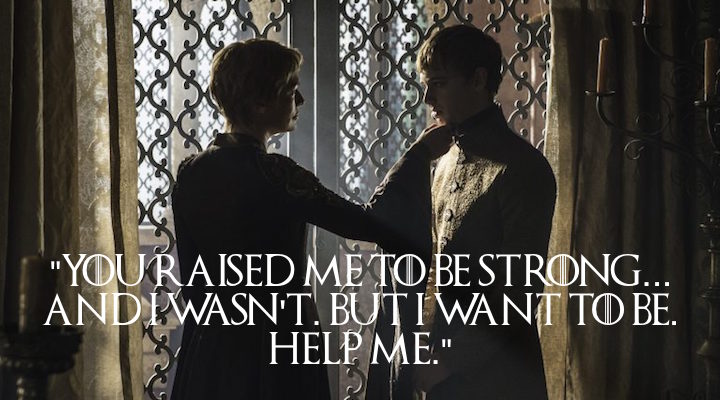 Aw, I feel so sorry for Cersei. I want her to get vengeance. I want to see Ser Robert Strong smash the High Sparrow’s head into a wall like he did to the peasant in ‘Home’. Either way I think a standoff between the Lannisters and the Faith Militant is imminent. There is no way this can be dragged across the entirety of season six. Somebody is going to die. I want it to be the High Sparrow and Lancel, but I suspect Loras. After all, Finn Jones has recently been cast in Iron Fist. 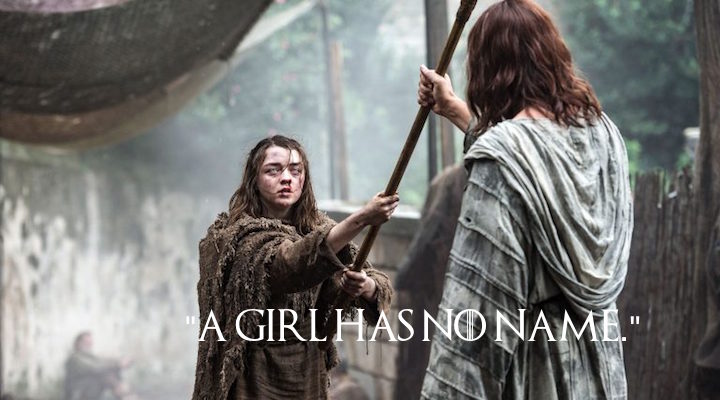 Arya becomes blind for one chapter only in ‘A Dance with Dragons’ and yet in Game of Thrones they’re dragging it across four episodes. If she doesn’t get her vision back in the next episode I will be pissed off. I want to see her become No One, I really do, but ultimately I want her to see. Sooner rather than later.

Ramsay ‘I am Lord Bolton’ Bolton is a bastard 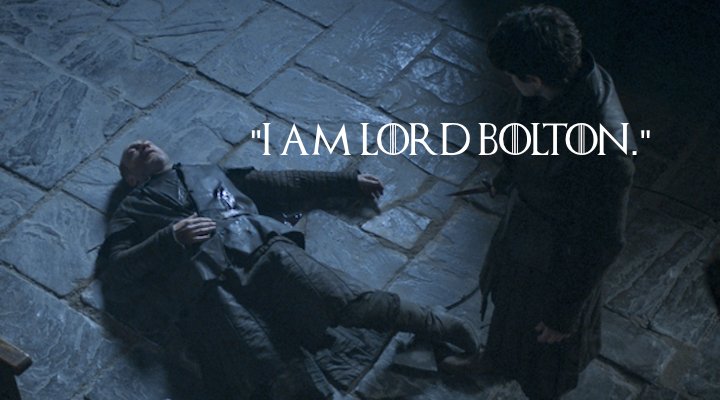 That was a shock, wasn’t it?! I did not expect Ramsay to stab Roose, and then feed his step-mother and baby brother to his dogs. That is even more twisted than Joffrey shooting Ros the prostitute – and that’s saying something!

Ramsay is deplorable. I don’t like him ONE BIT. He’s growing increasingly unhinged, and now that he doesn’t have his father to keep him under control I fear for what he’ll do. The Bolton’s will be marching upon the Wall before long, I think. And now that the Brother’s have the Wildling’s to hand, finger’s crossed that Ramsay meets his maker. Slowly. And painfully. THAT’S a storyline I’d like to see dragged over multiple episodes, not Arya being blind. 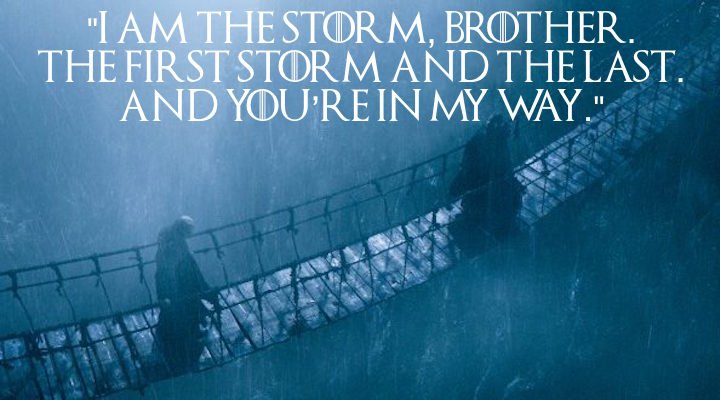 I am so excited to see more from the Crow’s Eye – Euron Greyjoy. He did come out of nowhere, though. I think an introduction scene would’ve helped, because Euron pops up, has a couple of digs at his brother Balon, and then throws him to his death. What? Why? It’s never been made clear whether Balon’s death in the novels was an accident or the work of Euron, so this seems to confirm the latter.

The impeding Kingsmoot will (hopefully) be a delight to see. The storyline in the novels is brilliant, I just hope this adaption is a vast improvement on Dorne. With Theon seemingly returning to the Iron Islands, I have a feeling the Greyjoy’s are going to become very prominent indeed. 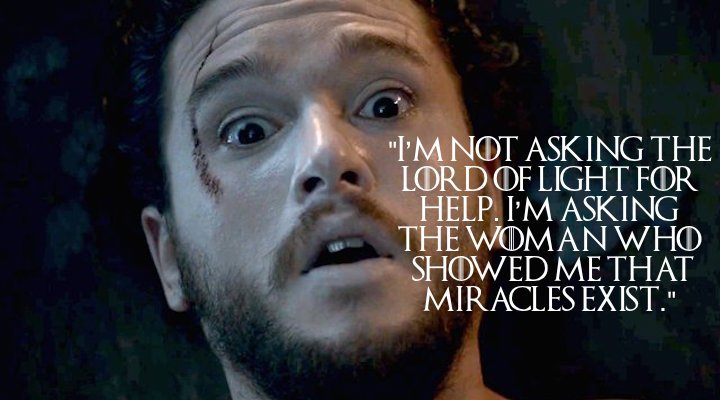 And saving the best ’till last… we all knew Jon Snow would be resurrected, right?

This scene was shot wonderfully. First we see a truly broken Melisandre (thankfully looking youthful once more) speaking with Davos. It’s so strange to see these characters interacting almost civilly; I hope it continues. Like I said last week, now that Stannis is dead, Melisandre can finally become a character rather than a plot device, and I’m excited to see what else she’ll do. I want to see her playing with her new-found powers. Perhaps she can resurrect Lady Stoneheart…

But back to Jon. I knew it was coming; I was sat on the edge of my seat. But when the mourners left one-by-one my hope was floundering. It was a wonderfully drawn-out scene that culminated in Ghost waking up, and Jon Snow being brought back to life, seemingly confirming that Jon, too, can warg as he does in the books.

Melisandre always thought Stannis was destined to be Azor Ahai reincarnate, but surely Jon is now? I cannot wait until the next episode. Keep up the excellent quality, Game of Thrones.