The sixth season of Game of Thrones kicked off in typical fashion – a crash course of all of the prevailing storylines to get viewers up to speed, culminating in one hell of a shock. Who the hell expected that?!

As usual, Vada will bring you the top moments that made us sit up and say OMG. Spoilers ahead. 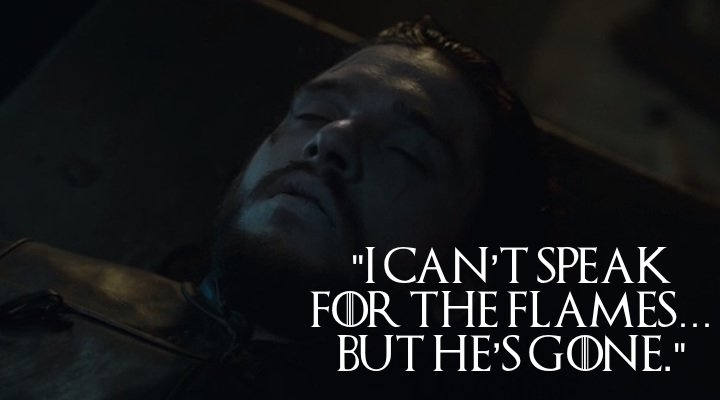 HBO have gone to great lengths to make sure viewers know that Jon Snow is dead. So, if you didn’t know, he’s dead. Right. Get it? HE’S DEAD.

‘The Red Woman’ focuses upon this heavily. We return to Castle Black not once, but three times over the course of the episode, with many lingering shots of Jon’s bloody corpse. Until we see his body burned, there is still hope. I happen to think it’s a huge copout to make us wait another week. I don’t care either way if he’s dead or alive, but I’m frustrated with not knowing either way. But, after that HUGE Melisandre twist, I think it’s safe to say she possesses the magic to resurrect him. 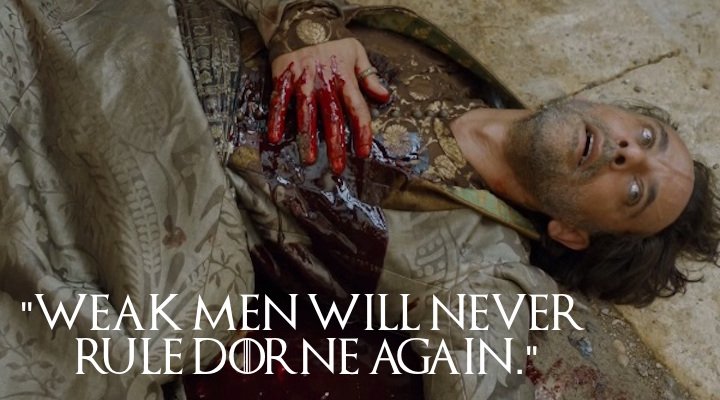 It appears that the show runners are finally listening to the fans. The Dorne storyline last season was amongst the worst stories Game of Thrones has ever done, and thankfully ‘The Red Woman’ offs Areo Hotah,  Doran Martell and Trystane Martell in particularly gruesome fashion. This was incredibly shocking, but thankfully I have a feeling it make may this storyline interesting. Just.

Dorne is incredibly disconnected to the main story. So are Dany and Arya, but at least we care about those characters. Nobody cares about Ellaria or the Sand Snakes. Game of Thrones needs to rectify this immediately, or else drop this story entirely. I’m hoping for the former; Ellaria was great in season four. 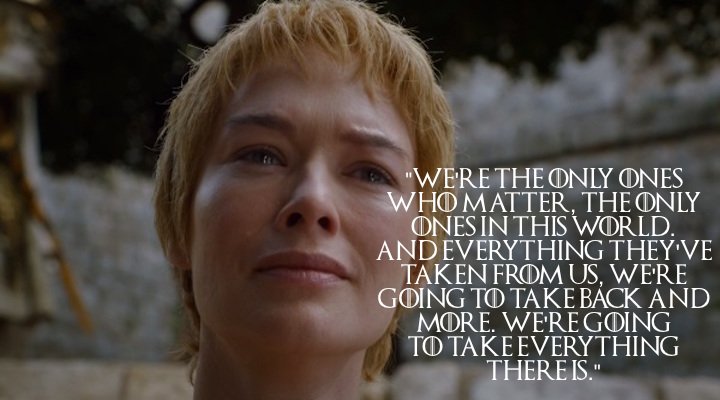 Ah my favourite character. It was heartbreaking to watch her glee at seeing Myrcella turn as she realised her body was covered in cloth. The long, poignant shot allowed Lena Headey’s acting chops to shine brightly once more. I sincerely hope she and Jaime pair up to bestow vengeance upon their foes. Starting with the High Sparrow. He needs to die soon.

I have a horrible feeling Cersei may die this season. If she does, I may be done with Game of Thrones. I ADORE her. 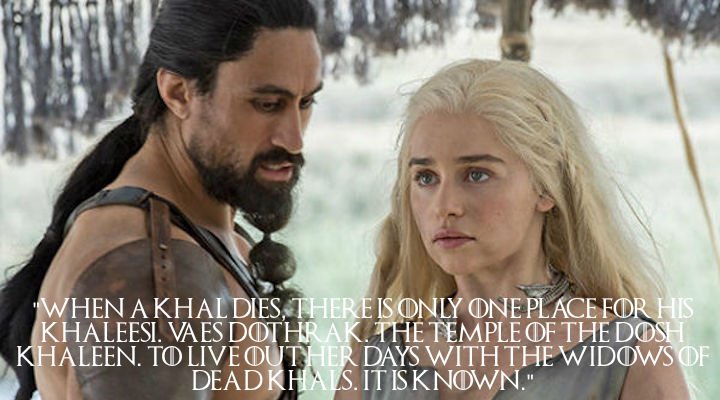 I have a horrible feeling Dany’s story is going to backtrack to season one before she manages to break free from this new Dothraki horde, and I’ll be pissed if that’s the case. Dany is the character who has come on the greatest journey I personally think. From meek girl sold to Khal Drogo, Dany became a Queen and breaker of chains. To have her regress to one of the crones of Vaes Dothrak is a colossal step backwards. Let’s hope Jorah and Daario turn up soon.

Brienne hits us in the feels 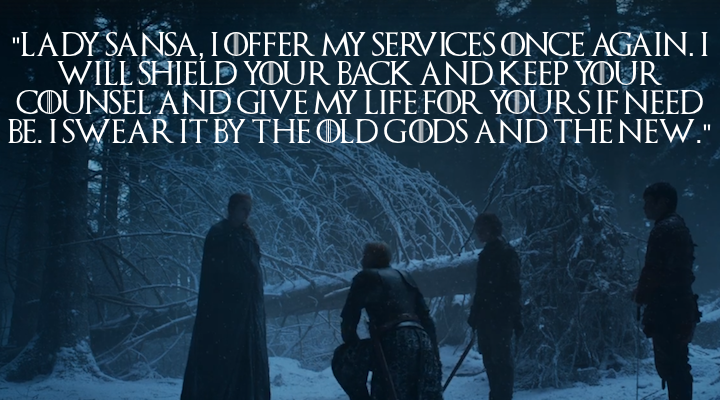 I was literally on the edge of my seat for this scene. I thought Sansa and Theon were going to get captured. I thought Theon was going to sacrifice himself. I wouldn’t have cared. I want Theon to die; it’s the only way to redeem his character.

But no. Brienne, a character I have long grown tired of, showed up and whupped ass and saved the day! And if that wasn’t enough, Sansa finally accepted her pledge of loyalty! And Brienne used the SAME words she used on Catelyn Stark. OMG my feels can’t handle all this emotion. This scene was glorious. Brienne may become interesting again. Please, please, PLEASE let Sansa have some happiness for once!

Melisandre is old… and we mean OLD 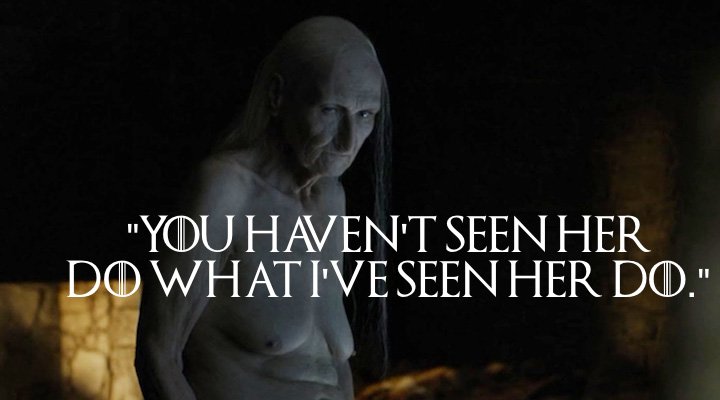 Who the fuck expected this reveal? I mean, it’s hinted at minutely in the books, but STILL. Melisandre is old. OLD old. Like centuries old. Drooping tits, the lot. She’s old.

It was a beautifully shot scene, too. Stripping herself off, I expected another gratuitous naked scene from Melisandre. But her warped reflection in the mirror changed ever so subtly and my eyes popped. Melisandre has the ability to show glimmers, projecting a younger visage over her starched body. She’s well and truly lost her faith, but at least we know that she has powerful magic behind her.

Fans have already spotted a continuity error. In season 4 Melisandre bathed naked next to Selyse without wearing her necklace, and she still appeared young and beautiful. But theories have amassed, some claiming that Selyse could see her true appearance (thus her horrified expression throughout), or that Melisandre’s powers don’t come from her necklace, or that she can pick and chose when to lose her visage. Perhaps it’s due to her faith, and her faith was strong in the bath scene.

RELATED ARTICLE  Geek out with a Game of Thrones-inspired escape

Whatever the case, I wouldn’t AT ALL be surprised to see Melisandre resurrect Jon next week. She has magic. Strong magic.