‘The Winds of Winter’, the final episode in Game of Thrones’ sensational sixth season is undoubtedly the best episode of the show thus far. I’d even go as far as saying it was one of the best episodes of television. Ever.

Death, spectacular special effects, showing reveals, and hints of a brilliant seventh season… ‘The Winds of Winter’ has it all.

Dorne is back… and it MAY get good 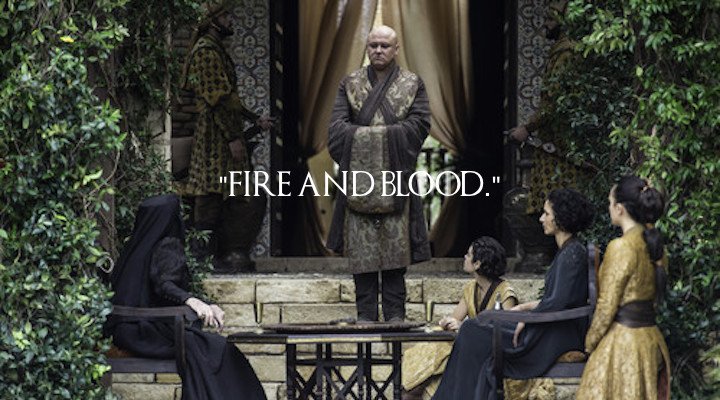 I had to stifle a yawn when I saw we were back in Dorne. But then I saw Olenna, whose usual cutting remarks were a delight. And then I saw Varys utter the immortal words of House Targaryen. Then I got a little bit excited. Varys and Olenna together are pure gold, and the backing of another powerful house helps Dany’s cause. She now has the Unsullied, the Dothraki, the Greyjoy House and the Martells… not to mention her three colossal dragons. Surely there’s no stopping her, right?

There’s only the question of her marriage, but more on that in a moment. 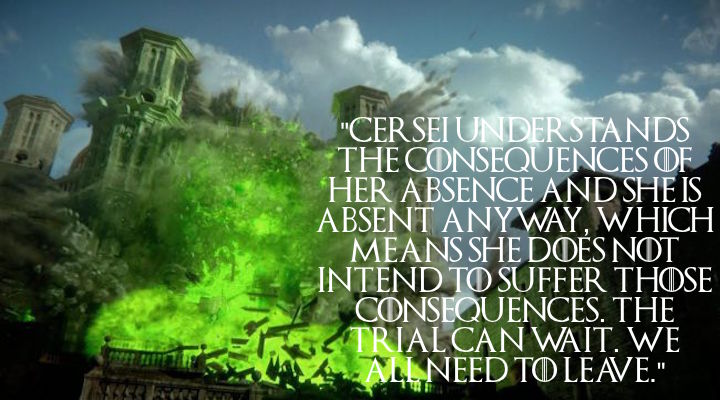 The entire opening segment, almost a third of the episode, was utterly gorgeous. From the lighting to the costumes, the acting to the score… it was breathtaking. Special mention has to go to the music, though. It tied everything together by nicely amping up the anticipation. We knew something was coming, but I didn’t dare believe that Cersei would actually utilise the stores of wildfire. How wrong was I?

RELATED ARTICLE  OMGame of Thrones – The Mountain and the Viper

The special effects here were utterly jaw-dropping. I’ve said it countless times, but it’s really hard to believe how these effects can be achieved on a television budget and yet somehow they make it work exceptionally well.

In one swoop Cersei manages to kill SEVEN important characters, with her actions resulting in the death of an eighth. No other show would be so bold as to kill that many people in quick succession. We lost Queen Margaery (I always thought (and secretly hoped) we’d have a huge catfight between her and Cersei), Margaery’s brother and father Loras and Mace, The High Sparrow, Brother Lancel and Kevan Lannister as the Sept of Baelor was blown in gorgeous fashion. Maester Pycelle was stabbed repeatedly by Qyburn’s little birds. The King Tommen committed suicide shortly afterwards. I was breathless by the end of this segment.

And thus Cersei’s prophecy has come true. All of her children have worn golden crowns and golden shrouds. I knew Tommen would die when he was dressed in gold. But there’s the matter of the second part of the prophecy to see unfold, but more on that in a moment. Again. 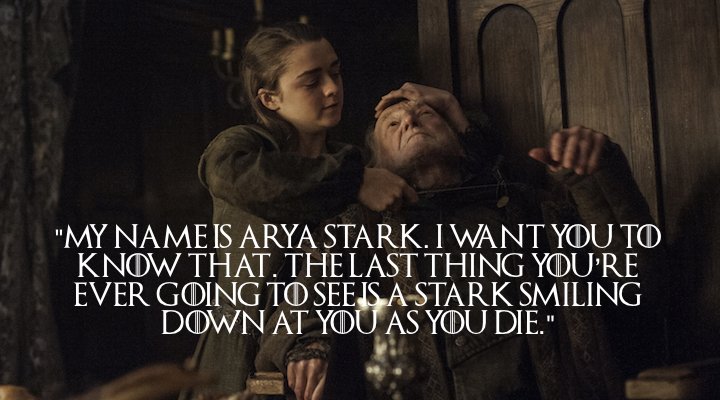 Last year Arya had a badass moment as she hacked Meryn Trant to pieces. This year she kills and cooks two Frey’s, before slashing the throat of Walder Frey. If anyone was to kill Walder, it HAD to be Arya. She had to enact revenge for the Red Wedding, and it was so incredibly satisfying to watch.

I’m intrigued about where her story will go next.

And I’m also intrigued as to what Walder’s death will mean to the recently captured Riverlands. Time will tell. 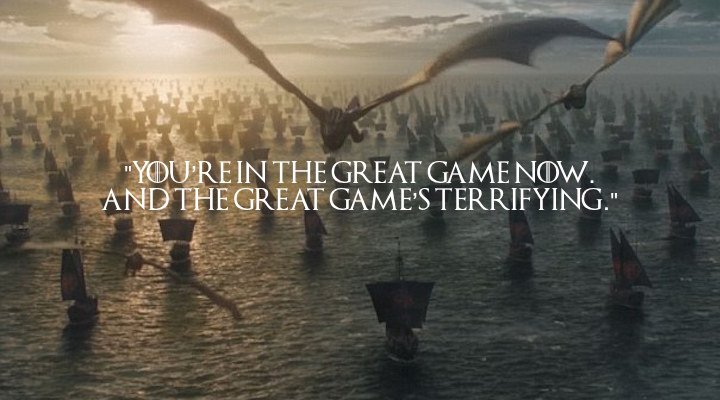 She’s only gone and done it! After six seasons of teasing, Dany has finally set sail for Westeros, even though nobody actually believed it would come to fruition. I simply cannot wait for the inevitable face-off between Dany and Cersei. Cersei will undoubtedly utilise wildfire again, but will it much matter when Dany has dragons?

In Westeros Dany has two powerful houses behind her, but she’s going to need a husband. Step forward Jon Snow. Though he’s related to her (more in a moment), Jon is the most likely candidate. He’s been crowned the King in the North, and he has both Stark and Targaryen blood. But with him being part Targaryen, that means he has a claim to the throne himself. Would he want it? Probably. But I think he’d rather be legitimised as a Stark, and claim the name of the man who brought him up as his own son. I think Jon and Dany will ultimately marry, and both will adopt the Stark surname. Now THAT is a power couple. But I hope Dany hooks up with Yara beforehand. Just saying.

Bow down to the QUEEN 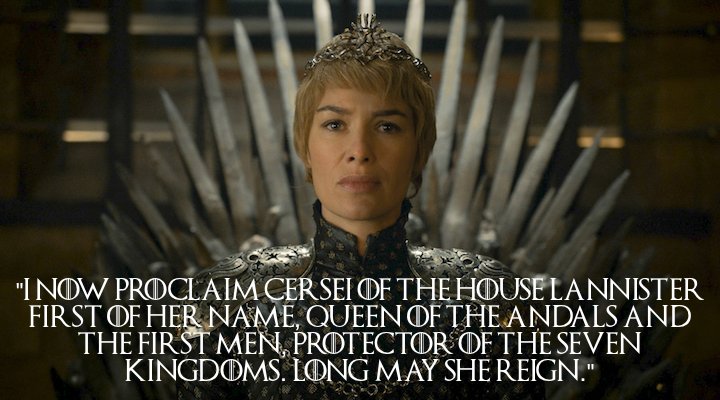 I ADORE Cersei. But she is going to die next season, right? Or maybe season eight. But it’s coming. And I’ll be devastated.

A lot of fans undoubtedly empathised with her last season as she was humiliated during her Walk of Penance. I don’t think she’ll have many fans now. But without any more children, Cersei finally ascends to power to become to first Queen of the Seven Kingdoms.

RELATED ARTICLE  OMGame of Thrones - Book of the Stranger

Not that Jaime is much happy about it. He ruined his reputation to save King’s Landing from the Mad King, only to have his sister and lover to the very thing he tried to protect the people from. Ultimately it means he became the kingslayer for nothing. It’s only a matter of time before he becomes a queenslayer, too, right? I can’t wait to see Dany and Cersei face off, but it HAS to be Jaime who kills her.

The full prophecy of Maggy the Frog stated that Cersei would become queen, and that a younger and more beautiful queen could cast her down. Everybody thought Margaery, but that surely refers to Dany, right? Furthermore, it is stated that the volanqar will wrap his hands around her throat and kill her. Volanqar is High Valyrian for younger brother – again, everybody once thought this meant Tyrion. But Cersei was born before Jaime, meaning that he is the youngest twin. It HAS to be him. 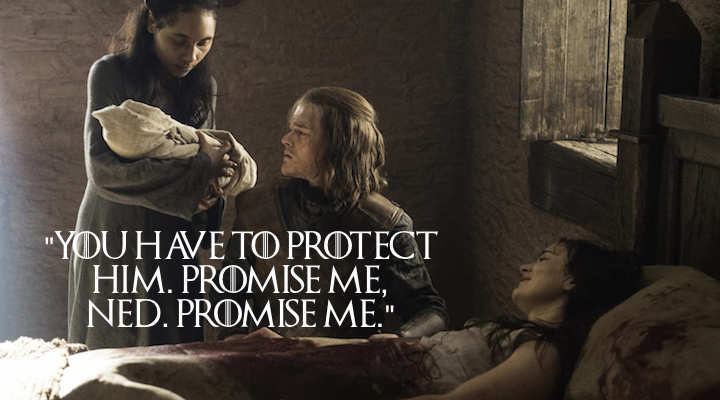 So the details about the father haven’t yet been revealed on screen (though HBO have since released a family tree that confirms it anyway), but the worst secret in Westeros has FINALLY been confirmed. Jon isn’t Ned’s son. No, he’s Lyanna and… Rhaegar, making Jon the nephew of Dany.

The Tower of Joy scene was a delight for many book fans who have been waiting for confirmation for years. This means colossal things for the future of Game of Thrones. But referring to my above theory of Dany and Jon hooking up, Targaryen’s are infamous for incestuous marriages, and there’s always the three-headed dragon theory still up in the air.

It’s going to be a LONG wait until season seven.