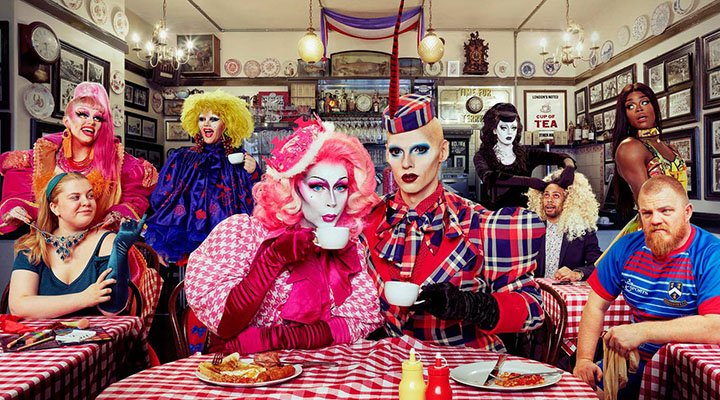 Okay, so first I should point out that I’m not usually a reality TV fan. It’s usually exploitative and commercial, and why would I watch someone else’s life when my own is interesting enough already?

But Drag S.O.S. is funny and touching, and seems to have made a difference to the lives of those involved – which is the best kind of reality TV, in my eyes.

You see, Drag S.O.S. is full of heart. The first time Anna Phylactic cried on the show, I started crying too. I think every LGBT+ person has felt the pain of rejection and stigma at least once. My partner and I were blubbing, both with happiness and sadness, all the way through.

When it ended, we felt uplifted, although still with a tinge of melancholy at the shared struggles on-screen (each unique, but each sort of universal, or at least very human, as well). In the space of an hour, I became a rabid fanboy, gushing and praising these #ManchesterQueens, and imploring my friends and family to watch the show urgently.

The show captures the Family Gorgeous’ strengths perfectly. Cheddar, the eldest of the crew, is like an auntie to many on the scene. It’s unsurprising, given her day job and credentials as an anthropologist.

She’ll pull you aside and give you a hug when you most need it, and sometimes she’ll also set you straight when you’re wandering off the path. Anna, meanwhile, can convey a world of empathy with a simple, ‘You alright, kid?’ and then help you forget it all with a dance and lots of smiles.

The strength of Drag S.O.S. is in these moments, which now the whole nation can witness. We see real people living their lives with real problems, and encouraging each other with real love and support. That’s a great message and makes me blub again, even just writing this.

Drag has a unique power in making you feel – and look! – fabulous. Especially the kind of drag promoted by Anna Phylactic, Cheddar Gorgeous, Lill Queen, Liquorice Black, Tete Bang and Asttina Mandella (and Donna Trump, too, in later episodes).

As anyone who’s visited Cha Cha Boudoir can attest, the atmosphere there is incredibly inclusive and friendly – and the performances are out of this world. This isn’t RPDR-style lip-synching, but storytelling with movie clips, songs and theatricality all woven into a very stylish whole.

At Cha Cha Boudoir, anyone was able to pitch a number, and many of us were converted to drag as a result – bringing our friends, family and, in my case, old English teacher onstage with us. It’s all about community rather than pageantry. It’s about coming together rather than pitting against.

And that’s what shines through on Drag S.O.S. Communities really are brought together with glamour and fabulous wigs.

Fathers are movingly redeemed in their sons’ eyes. Daughters overcome years of eating disorders and low self-esteem to become darkly glamorous idols. Knackered mothers take time out to feel good about themselves and be something other than ‘Mum’.

If you haven’t seen Drag S.O.S. yet, I urge you to do so. If you’re soppy like me, you’ll weep like a baby, and love every moment of it.