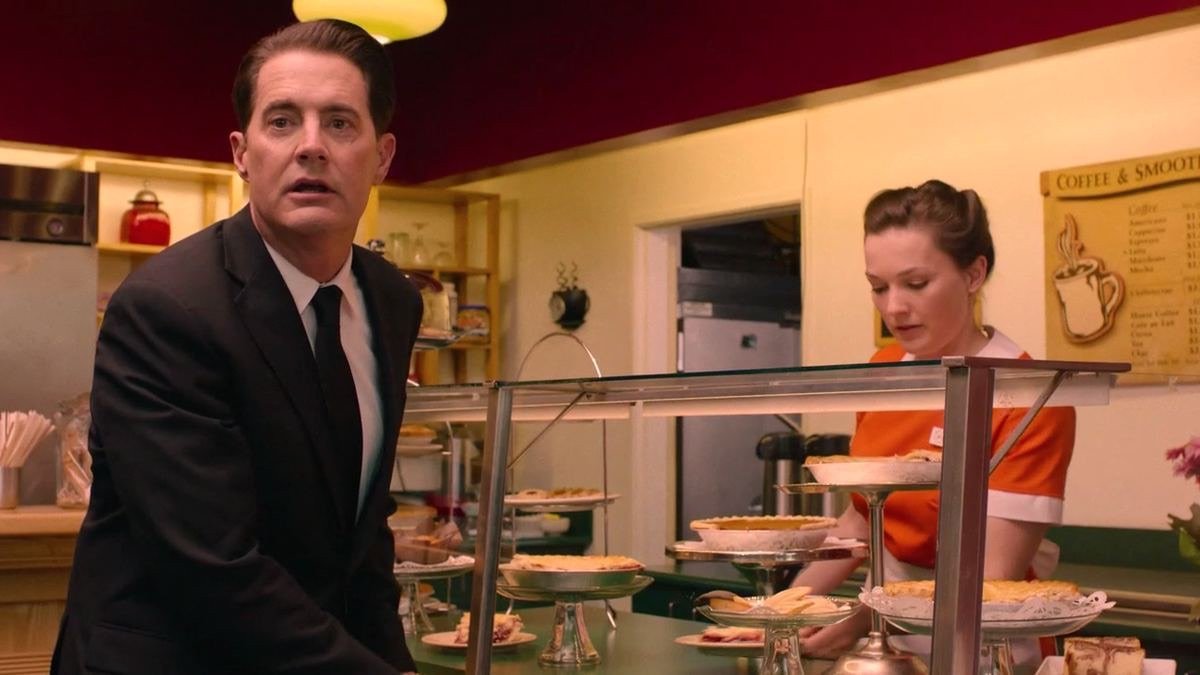 In the town of Twin Peaks it’s takes far less time to check off its happier occupants as opposed to its lonely, broken and profoundly troubled. Nadine, who finally gets a scene outside of her silent drapes store, ‘Run Silent, Run Drapes’, is the business woman she always wanted to be and is ecstatic. Her talk-radio idol, Mr Amp aka Dr Jacoby, seems less so as does her still possible partner Big Ed, who returns this week. Andy and Lucy are still amazed by the little things that life reveals to them and seem very much in love. Deputy Hawke remains stoically observant and thoughtful as well he might. In the comeback’s first episode the log lady chose him to investigate what was ‘missing’ and in episode 13 the phrase ‘love doesn’t always turn a profit’ was used, with the emphasis very much placed on profit. It doesn’t take a special agent to figure out what’s been stolen here.

Cooper fans are in for treat this week following his stingy, one-minute appearance in episode 12 last week. Both Evil-Coop and Dougie-Coop have been allocated major scenes and both survive attempted assassination, cherry pie is yet again involved and you can guess with which Coop. The 13th episode opens with the Vegas crack-pot pack doing a conga-line in the Lucky 7 insurance office, celebrating their multi-million pound payout but crooked employee Anthony panics and calls Mr Todd to advise that Dougie Jones is still not dead. Dougie-Coop is seemingly called, and again saved, by a seductive cupcake minutes before Anthony attempts to kill him with poisoned coffee. Janey-E confuses her love for the car and the jungle gym that the Mitchum Bothers have bought her and Sonny Jim with that of the love for the man she believes to be Dougie, her husband. How she will cope when she realises that this good luck charm is temporary?

Evil Cooper is looking for Ray and those pesky coordinates after he left Coop for dead at the beginning of the extraordinary episode 8. He drives to a warehouse populated by a rag-tag gang of men, the hulking leader of which, Renzo, makes Coop arm-wrestle him for Ray. A camp and surprisingly thrilling match commences and Coop, following hysterical and repeated requests to take the game back to ‘starting positions’, knocks his competitor out, literally. His scene with Ray confirms that it was Philip Jeffries who hired him to kill Coop, that he has something inside him they want (or does he?). He was told that he has to put the owl ring on Evil Coop and that Jeffries is staying at the Dutchman’s. Evil Coop makes Ray put the ring on, shoots him dead and the ring clangs back onto the floor of the Black Lodge along with Ray’s bleeding body.

In Twin Peaks, Big Ed and Bobby are about to join Norma on the job to eat supper at The Double R when Norma’s business manger and partner arrives to discuss her franchises – Norma has her own diner chains!? Problem is the cherry pie (again) is too expensive to turn a profit but will the Twin Peaks super-chef allow her art to be comprised just to turn a buck? Sarah Palmer meanwhile contributes another cracking performance in a truly chilling, ambiguous scene. Pictured in front of the TV, too drunk to barely pull herself up from the sofa to retrieve more vodka from the kitchen, the boxing match she’s watching – the second game this week of two men competing physically – keeps sticking and looping back on itself, halted by an electronic buzz. This could be an analogy for her life of course, a stuck tortuous existence, but it could also mean more – a harbinger of something dangerous encroaching. Electricity is a catalyst of both good and evil in Lynch’s worlds.

We return to Audrey and Charlie and they are now in a different room but appear to be continuing their conversation that re-introduced us to the adored, original-cast member Sherilyn Fenn last week. Charlie appears to be impatiently familiar with Audrey’s current state of confusion and distress, she now appears vulnerable and highly anxious and can’t remember who she is, where she was going (the Road House) and then how to even get there. It’s another increasingly melodramatic scene and Charlie’s role seems more than just a husband.

‘Do I have to end your story too?’ he asks Audrey.

‘What story is that, Charlie? Is that the story of the little girl that lived down the lane?’ And she sobs and sobs, and this is heartbreaking.

The show ends with James Hurley again singing the cheesy ‘Just You’ from the original series at the Roadhouse and Big Ed in his gas station staring out into the big night, eating soup alone. That’s a lot of Twin Peaks in one episode, nostalgic and seemingly unchanged with Hurley’s performance, but awash with updated loneliness and disappointment for Audrey, Big Ed, Sarah Palmer and many others. If Laura Palmer really is the one to provide salvation then time is running out for Special Agent Dale Cooper to bring her back from whatever place she is now being held. He needs to leave Dougie Jones and Las Vegas now, Twin Peaks can’t afford to wait another 25 years before they see him again.