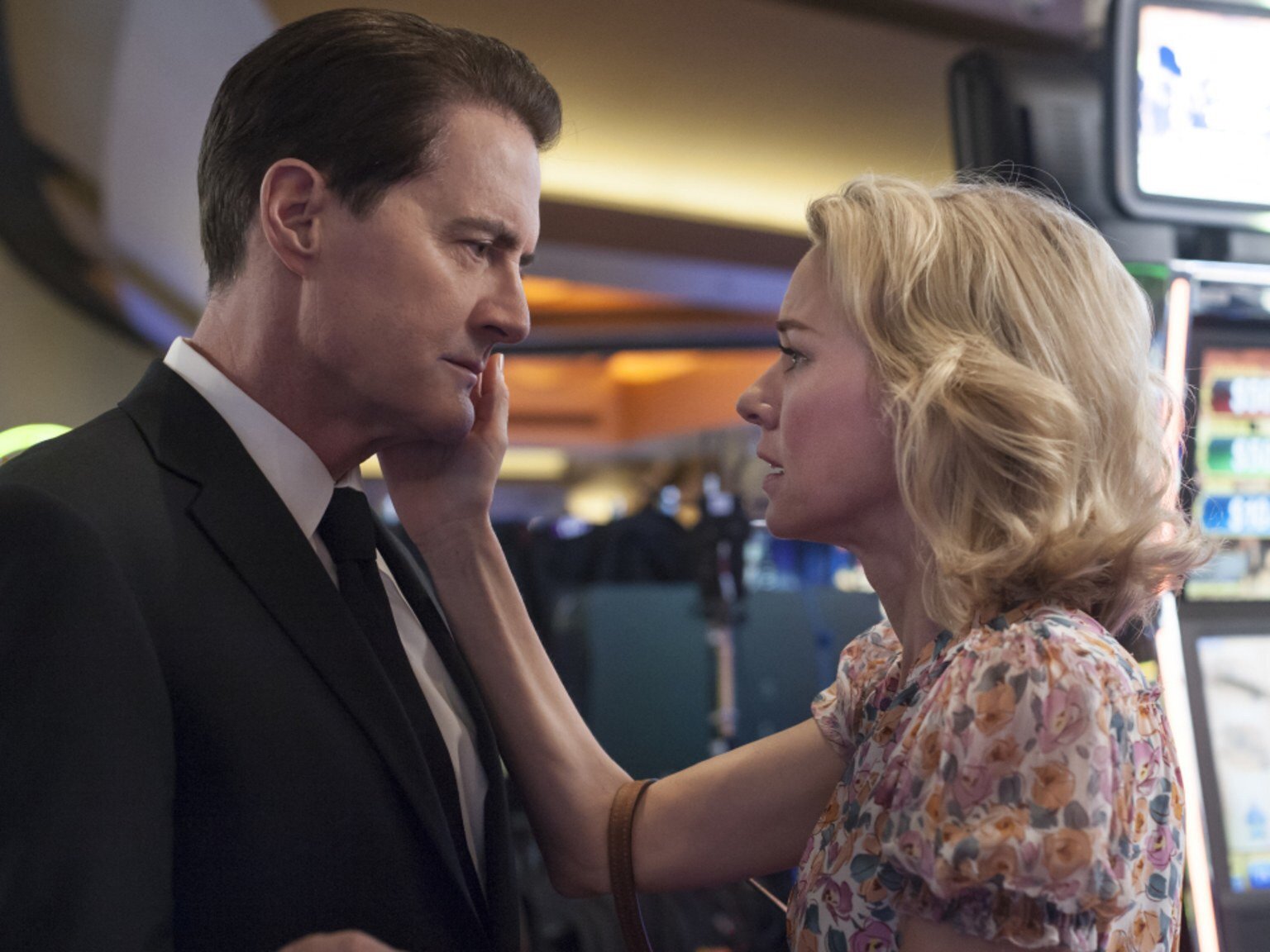 Special Agent Dale Cooper is back. He confirms it himself whilst sitting up in a hospital bed, wide awake from his electric-shock induced coma: ‘100%!’

‘Finally,’ replies the one-armed man, as do we all. Episode 16 is the final part of Twin Peaks – The Return before we get to next week’s two-part conclusion which, I suspect, will mirror the show’s first three episodes, and the already notorious ‘episode 8’, for weirdness and worlds not recognised as real.

That we are down to the show’s last few hours is hard to accept. Partly because it feels as though this show has so much more life left in it and it is unlikely there will be a series 4. But it’s more to do with where the emphasis has sometimes frustratingly been placed since following the brilliant episode 8 and how little time there is left to concentrate on the show’s strength, which is still Twin Peaks – the place, the people and the mysteries of the woods.

Janey-E and Sonny Jim sit beside Dougie Coop whilst he’s still in a coma and his boss and then the Mitchum Brothers and the Candie girls come to pay their respects. When they all leave the room and Dougie Coop is on his own, the ringing tone heard in the Great Northern returns and Dougie sits up and is fully conscious, AKA the Cooper we know and love. The one-armed man informs him that Bad Coop has not gone ‘back in’ and Dale Cooper asks the one-armed man if he still has the seed (this is the small gold ball that was once Dougie Jones). He does, and Dale rips a few hairs from his head and asks the one-armed man to make him another one – meaning another Dougie Coop.

This clone is for Janey-E and Sonny Jim as Cooper won’t be hanging around Vegas for long. The one-armed man hands Cooper the owl ring and we know that the wearer of it will eventually end up in the Black Lodge. Dougie, Ray and Laura have all been previous owners. Weird then that instead of keeping it safe, Cooper leaves it under the pillow of the hospital bed. This is very subtly done. You have to be quick to spot it, but he’s put it there for a reason. Who is going to find it?

Cooper thanks his suburban, surrogate family for letting him stay but Janey-E knows this is not Dougie but thanks him for everything he has done. Something about these scenes is anti-climatic and slightly off. This is a massive moment for the show, and its fans, and to hear Cooper say, ‘I am the FBI,’ when asked what he’s going to do about the FBI’s impending visit to the hospital is, admittedly, tremendously satisfying. But I’m curious about why exactly Cooper and Janey-E are so grateful to one another following the short time they spent as a ‘family’ during Coop’s near-mute, adult-man phase.

Naomi Watt’s acting was never naturalistic and her presentation of Janey-E as an embittered, nagging wife who only sweetened once she started to get a decent car and a man she was at least physically attracted to, felt misogynistic and comically cruel. The character’s strength is her fearlessness and lack of sentimentality, but this all comes undone when Dale returns and tells her what to do, including driving their car. She seems to like this and swoons at his ability. Maybe Janey-E just welcomes a break from the useless men in her life but this not a character who stands up to much scrutiny and certainly not as any kind of a feminist role model.

Dale Cooper is making his way back to Twin Peaks in the Mitchum Brothers’ private plane and so, presumably, is Evil Coop. The episode starts with him and Richard driving to find the coordinates given to Doppel-Coop by two people out of the three people who have surrendered this information. This set of coordinates leads them to a giant boulder and Cooper gets Richard to climb it and find the exact spot where the coordinates match. When he does he is electrocuted and disappears on the spot. Evil Coop tuts and mutters, ‘Goodbye my son,’ their father-son bonding session lasting mere moments.

When The Fireman first spoke with Dale Cooper in The Return‘s opening episode, he told him to remember ‘Richard and Linda’ and ‘two birds – one stone’. Well Dale Cooper has never met Richard, and if he did what would his relationship be to him? If Evil Coop is Richard’s father then isn’t Dale Cooper also connected? We still haven’t met Linda (although reference has been made to person of that name who lives in the Fat Trout trailer park) and could the rock that Richard died on be the stone The Fireman referred to? My poor head.

Laura Dern as Diane was the real star of this episode, although she has stolen almost every scene she has appeared in since the character was introduced. Her ability to inject her too-few lines with genuine menace and mystery just confirms her comfort with, and level of understanding of, the director David Lynch. When Cooper is whisking his temporary family to pick up the Mitchum Brothers, the Twin Peaks theme ‘Falling’ is at full sentimental blast. It bleeds into the new scene which shows Diane at the bar of the Buckhorn Hotel and stops abruptly when Diane picks up a message from her phone, a smiley face and the message ‘ALL’.

The rest of Dern’s scenes have to be watched very closely indeed as all sorts of minor but probably important things are seen or said. When she receives the message she is completely panic stricken and goes into a mild shock. Thinking as quickly as possible how to respond: ‘I remember. Oh Coop! I hope this works,’ she says as she punches a number into her phone. To me it is clear that she talking about the old Cooper, her boss from two decades ago, and this number, another coordinate, will likely keep him safe. She checks her handbag (it has a pistol inside it), and then makes the long walk to the hotel’s makeshift FBI office and the Blue Rose task-force.

Gordon Cole asks Diane to come in even though she has not made herself known. Have they already had sight of the message she sent 10 minutes earlier? She starts to tell Cole, Albert and Tammy what happened on the last night she saw Cooper. After suddenly appearing in her apartment (‘No knock, no doorbell.’) he quizzed her about FBI issues and went to kiss her. She recoiled in fear as something was wrong. Cooper sexually assaulted her and then took her to an old gas station – clearly The Convenience Store. Looking at her phone again, the response she sent has now disappeared and the original message received at 16:31 now clearly shows as being received at 15:50. Huh?

Diane starts to fall apart at this point and her actual words are hard to a make out, but what she is saying is, ‘I’m at a sheriff’s station, I’m at a sheriff’s station?’ After pulling out her gun, she is shot dead by Tammy and Albert and her body flies out of the room. Diane was a doppelgänger/tulpa all along, so where is the real Diane – in the sheriff’s station? That white wig looks great in front of the Black Lodge’s red curtains where Diane has now appeared and before turning into a golden ball (or ‘seed’, as we have learnt this week) just like Dougie before her, she tells the one-armed ‘fuck you’. We loved you Diane, you were an absolute blast.

Lots of weird shit has been going down at The Roadhouse – and not only its uncanny ability to secure acts of the calibre of The Chromatics and Nine Inch Nails. Last week the show ended with a young woman crawling along the floor and between the legs of the crowd, violently screaming. We don’t know this character and we have no idea why she was in so much pain. This week Audrey and Charlie have finally left their ‘threshold’ and are sat pensively at the bar sipping their martinis.

The act ends (which is Eddie Vedder – see what I mean?), but then the announcer introduces ‘Audrey’s Dance’, the name of the Angelo Badelementi composition that played while Audrey danced solo in the show’s first season. This is the show referencing itself – a startling nostalgic throwback fans will be overjoyed about. Audrey takes to a cleared floor, whose punters sway in unison on the sidelines, and does her dance, not quite but almost like she did 25 years ago in the Double R. Suddenly there’s a fight on the dance-floor and Audrey isn’t in The Roadhouse at all but looking at herself in a mirror in a white room. Electricity buzzes – but where are we now?

This penultimate episode spends too much of its time elsewhere which can irritate. The hitman and her, Hutch and Chantal, are outside the Jones’ household. They witness the FBI and the Mitchum troupe turning up before they are both gunned down by a complete stranger. This takes a long time and feels wasteful. As touched on with last week’s recap of episode 15, which I preferred, there are just too many important plotlines to tie up, and to shun these in favour of less interesting characters and story arcs would be bizarre – but with Lynch and Frost anything is to be expected. Special Agent Dale Cooper, you’ve only just returned but your time is almost up – please use it wisely!