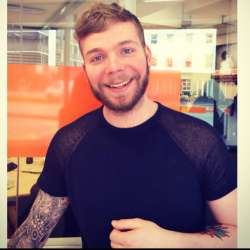 Bored of Grey’s Anatomy? Fed up with Scream? Don’t want to see a reboot of Lost, or never really got in to The Walking Dead? Fear not square-eyes, because boy does American television have a Trick or Treat for you this Halloween month – Scream Queens (not to be confused with the short-lived 2008 reality show).

Revolving around a group of grisly murders on campus surrounding the mysterious sorority house of Kappa Kappa Tau (KKT), 15 episodes unfold as we try and guess whodunnit amongst a cast including Emma Roberts, Ariana Grande, Lea Michelle and Jamie Lee Curtis. Hey wait, didn’t Wes Craven (R.I.P.) and MTV do that this summer with Scream? They sure did, but whilst Scream was bogged down in poking fun at society and a Myspaceless generation, Scream Queens is too busy poking fun at itself. Cue ‘Deaf Taylor Swift,’ the buffest serial killer costume we have ever seen, and ‘Girl, why you got a knife sticking out your head?’

Imagine being poisoned with candyfloss and vomiting rainbows, whilst simultaneously being impaled by a unicorn and being pummelled to death by The Care Bears whilst Mean Girls plays in the background. This is the latest show to spew forward from the twisted mind of Ryan Murphy. The American Horror Story / Glee creator presents to us his latest horror anthology to fill the gap between the death of Glee and the upcoming American Horror Story: Hotel. What you are left with is a sugar coated bloodbath, easily to swallow for today’s meme hungry generation. Whilst Murphy is constantly badgered for the decline of his shows, and it is only early days, Scream Queens tongue in cheek attitude gives it a premise that could run and run.

Heading up KKT is Chanel Oberlin, the Regina George of soroities and her army of Chanels, she can’t be bothered to learn their names and by episode one we are up to Chanel No.5. Emma Roberts was undboutedly cast due her resting bitch face phases from the likes of Scream 4 and uberbitch Madison Montgomery in AHS: Coven. Auntie Julia Roberts became awkwardly typecast as the romcom doll, but we have no gripes for Emma to continue her reign as queen bee.

But Robert’s isn’t the titular character and this is what gives Scream Queens some substance. Jamie Lee Curtis steals all of her scenes as Dean Cathy Munsch

‘Do you think you like to munch box because your last name is Munsch?’ 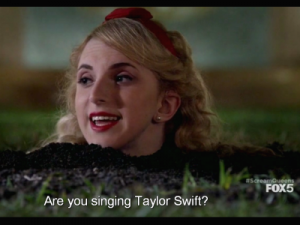 The Oberlin effect is already being felt across social media and Scream Queens is generating that underground cult buzz that RuPaul’s Drag Race has – watercooler ‘did you see’, and ‘that was totes LOLS.’ If you’ve watched it you’ll get the joke, if you haven’t, you feel left out! Oberlinh accounts are popping up all over instagram as newsfeeds are filled with quotes about ‘closet vag’ and ‘what fresh hell is this?’

Oh and remember, never says BRB… Chances are you won’t

View all posts by Tom Chapman →