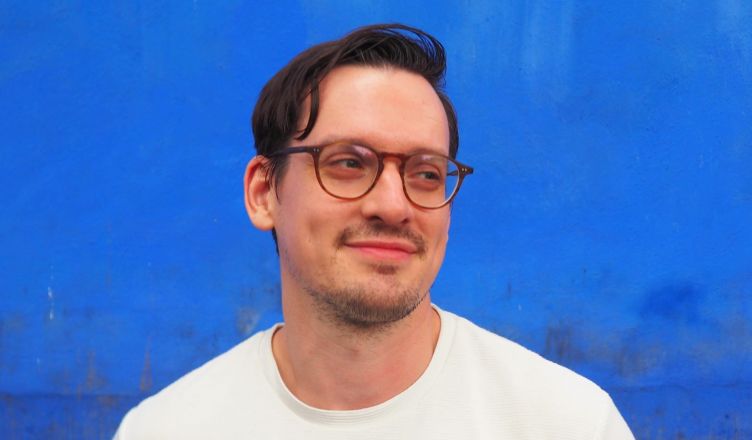 The author sits down with Vada Magazine to reflect on writing his third sci-fi novel during lockdown and how comedy isn’t necessarily a form of escapism.

Chris McCrudden is sitting in a hotel bar, sipping on a Negroni, and contemplating the end of the world. “Over the past couple of months, if you turn on the news you have a pandemic, the threat of a nuclear war, and environmental disasters,” he tells me. “It’s quite difficult as a conscious person to not think, ‘Oh shit, things are a bit heavy at the moment.'”

It might seem like a rather unnerving conversation to be having against an ambience of evening cocktails, mood music and a fireplace, but McCrudden, much like his books, is not one to shy away from difficult topics. Author of the Battlestar Suburbia series, McCrudden’s latest novel Sashay to the Centre of the Earth explores what happens after a war and the ongoing tension between the two sides. This book is the third in the series, which sees machines, such as the breadmaker Pamasonic Teffal and the parking meter Carin Parkeon, struggling to live harmoniously alongside humans in McCrudden’s universe.

As with his previous two books, McCrudden has taken potentially challenging topics and put them front and centre of this sci-fi comedy. When I ask him if comedy is a form of escapism from the difficulties we face in our daily lives, McCrudden disagrees. “I think jokes and comedy, on one level are fun, and then on another level they allow us to approach things and confront and work through things that are very difficult to approach head on,” he says. “For me as a writer, I want things to be funny, but I also want to use humour as a way of saying, what if this happened? What if you run out of food on a space station? And not taking it in a dark place, where I think a lot of science fiction goes automatically, but saying let’s look at it from the other point of view.”

It’s a lesson he gained from his day job working in PR. “The more you try to push people’s noses up against the glass or misery, the more they want to turn away,” he explains. “So being able to approach serious subjects with humour and lightness, is a way to give people permission to see something that’s scary and see a solution to it. Overall, I think humour is an underused tool.”

Despite the desire to examine serious subjects through his writing, like many authors, the pandemic and serial lockdowns had an impact on McCrudden’s work. Having signed the contract for Sashay to the Centre of the Earth in May 2020, he spent the summer of that year writing, as the pandemic worsened. “I was meant to deliver it end of March 2021, so I was writing the book in the deep, dark days of lockdown,” he recalls. “And then it just… It was a difficult one, and I lost my way with it.”

He reached out to his editor and explained that his manuscript would be delayed. Having “blasted through” writing the first draft, McCrudden tells me when he read it back, he hated it. “I hated it so much that I opened up a new document and started again,” he says. How much did he throw out, I ask. “All of it. All eighty-five thousand words! Obviously I was a bit late handing it in, but once I’d started again it only took me about three months to re-write the draft.”

Reflecting on it now, McCrudden sees that he had subconsciously put his characters into their own lockdown. “I’d written it in a state of angst and isolation, which is not conducive to writing comic fiction. Well at least not for me,” he explains. “And what I’d realised is that I had written each character into corners. The storylines that I’d written were all happening in isolation. I’d taken the characters to places where they were peeling off from more and more people.”

The publication of the book comes at a time when war is at the forefront of our minds. When I point this out to McCrudden, he is clear that he doesn’t wish to draw comparisons between his novel and the war in Ukraine. “When I look at what I did with the book, the main thrust of the plot is there’s a covert operation to invade a nation – that’s an unhappy accident,” he replies. “But what I did want to explore is what happens with a war effort and the reaction to an invasion. What if you don’t have weapons and you need to use sweets? Or what happens when you don’t have armour, so you have to use something that is accidentally armour?”

McCrudden adds, “I suppose like with my other books, the thematic stuff within the books is quite serious, but then they’re expressed in the lightest way possible.”

The Battlestar Suburbia series has been popular amongst LGBTQ+ readers, arguably due to its representation of queer characters. McCrudden grew up gay during the nineties in South Shields, at a time when being gay was “it’s fine, but don’t stick out too much” as he describes it. So when it came to sitting down to write his first book in 2011, McCrudden thought the introduction of a queer character needed to be subtle. “I thought about making one of the characters, Janice, gay and then the rest would be a bit more under the table,” he tells me. “I’ve got to sneak things in, because otherwise it just gets too niche or whatever.”

As the books went on, the representation of queer characters evolved. “When I was writing book two and three, everyone is queer until proven otherwise. So it gives me permission and space to do what I wanted with that universe. Not every character is queer in the books, but the universe has a very queer sensibility.”

Those who follow McCrudden online will know exactly what I mean when I say he uses many tools from his toolbox to promote his books across social media. “The reason I use social media is because it’s a leaver that I can pull on with some degree of competence – because I’ve worked in comms and social media,” he explains. “Not all authors want to engage with it, which is also fine. I think when you’re an author and when you’re published by a small press, and you operate in a niche genre, you don’t get that much marketing. So you’ve got to do the best with what you have available.”

Speaking of his day job in communications, I ask McCrudden about how he finds navigating full-time work with writing novels. “It’s not easy,” he replies. “It means that you have to give up a lot of your spare time.”

When he finished his latest book, McCrudden tells me that he was shocked to discover he could actually do things with his evenings and weekends. So what did he do? “I didn’t do anything!” he laughs. “When I was writing the book I got up, I wrote, went to the gym, got home and wrote again. So there was a whole process of learning to do things again, like going to a gallery, or a museum, or meet up with someone for brunch. And especially after lockdown everyone’s social muscles were a bit slack.”

Looking to the future, McCrudden can’t really tell me what he’s working on. So I ask him about if he’d ever consider writing full-time. “People who say never always eat their words… If I got a big enough offer or anything like that, fine, let’s explore it. But writing full time, it feels like a distant possibility, and a very precarious way of living, especially if you’re writing fiction. And I’m just not into precarity.”

Sashay to the Centre of the Earth is published by Farrago Books, and available to purchase now. You can follow Chris McCrudden on Twitter.