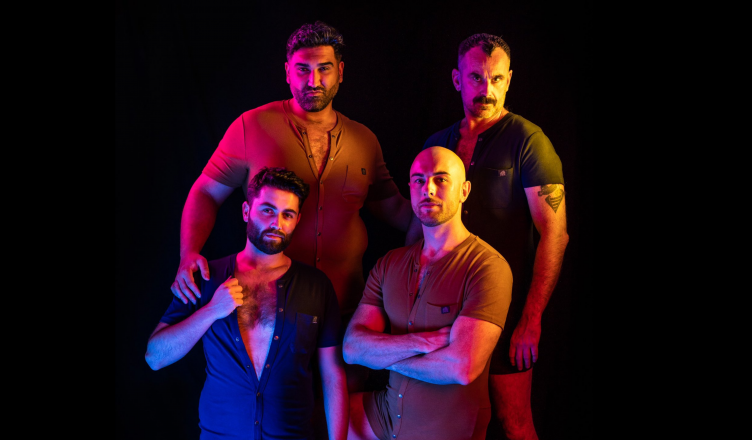 Glen Scott sits down with Vada Magazine to tell us about how he went from being made redundant during the pandemic, to launching his own fashion label, DEN Loungewear, which continues to grow in popularity amongst queer men.

Glen Scott sends a handwritten note to each of his customers, thanking them for purchasing from DEN, a fashion label he started during the pandemic. After a 15-year career as a menswear buyer for various brands, Scott was made redundant from his role at Primark in 2020. Left with the question of what to do next, he embarked on launching a new menswear brand, something he had been secretly dreaming of.

“It felt like it was a good enough time as any to try something new, so I took the plunge,” Scott tells me over Zoom, from his home in Brighton. “I saw a real opportunity in the UK gay market, for there to be a gay-targeted clothing brand. We do cater for everyone, but I thought being part of the community, I felt I really wanted to do something that catered for that market.”

The idea of DEN Loungewear was born, with Scott wanting to create a product that wasn’t overly sexualised. Scott argues that there are a number of brands that are doing positive things for the LGBTQ+ community, but that the focus still leans towards sex. “I wanted to create something that felt a bit more relaxed,” he recalls. “Something that you could wear whilst watching EastEnders, or eating a takeaway, and yes you can also do other things whilst wearing it too.”

Alongside his partner Mark, who had left his career in aviation due to the pandemic, the couple launched DEN last year. Their flagship product, the Union Suit, is a close-fitting garment with poppers going down from the neck to the crotch, all the way round to the top of the lower back.

DEN has grown in popularity, especially amongst queer men. Strictly’s John Whaite, for instance, is a fan. When I bring this up with Scott, he thinks this thanks to the brand’s authenticity. “I feel like if you want to build up a successful brand, you have to ensure it is authentic,” he replies. “It’s something that I think I’ve done with DEN. If I hadn’t targeted our products towards a queer community, as a gay man myself, then the product would not have felt authentic to me and wouldn’t have had a clear authentic voice to it. It’s a value that I will always have in the business.”

Scott has also used the popularity of the product amongst the queer community to raise money for organisations helping LGBTQ+ people. DEN has contributed proceeds towards the HIV charity, the Terrence Higgins Trust, and the mental health charity, Mind. Even during his time at Primark, Scott was conscious of the opportunity for brands to help charities. He was part of the team leading the company’s Pride collection. “It was one of the values that was really key to me,” says Scott. “Even before we booked the first stock, I knew that we would be doing something for charity, and giving something back.”

There are assumptions, I venture, that the fashion industry is a more accepting environment for gay men. But what does Scott make of this? “I have to say whilst I was working at Primark, everyone was behind the idea of introducing a Pride collection,” he recalls. “And that’s right down from the directors in the boardroom, they were all open to my ideas around why I felt the collection was needed and what it should stand for.” Since he has left the company, Primark now has a staff LGBTQ+ network, which is something Scott describes as “heartwarming to see.”

When it comes to businesses more broadly, however, Scott argues that unconscious bias can hold back LGBTQ+ employees from exceeding or performing as they should. “A lot of businesses have LGBTQ+ networks and charters, but I think when you speak to employees on an individual level, there’s still not an even playing field of us. We still feel like a minority group.”

Scott admits that he has come across situations in his own career where being gay might have held him back. He wonders if he would have been treated differently or ascended the career ladder quicker, if he were a straight man. “I think that it’s really important today that people are talking about and acknowledging these issues, which is a step in the right direction.”

From the outside, Scott seems to have fared well in the face of his career being abruptly punctuated by a pandemic, almost like a phoenix rising from the ashes. Yet I’m curious about what this experience was like from the inside. “I’ll be completely honest with you, I was horrendously knocked back at the time,” he shares, crediting the support of his partner Mark during the lockdowns. “It took a long time to mentally pick myself up again.”

Having always lived with anxiety, Scott says he was imagining the worse. “I had serious visions of us two having lost our jobs, never working again, and living under a bridge with the dogs,” he recalls. Then, one day, Scott tells me that he “snapped out of” this state of anxiety. “I just thought, fuck it. I’d rather be worried about something that is actually happening, than picturing the worst case scenario. So I decided to just go for it, and start this business.”

The process of starting the business was slow. The security of working for a huge company was gone, and now Scott needed to put himself out there, alone. “I spoke to people I knew in the industry, various creatives, designers and freelancers, and started getting advice on how to develop the business,” he says. “There have been multiple people who have guided me along the path of setting up DEN and turning it into a reality.” One of the benefits of starting his own business, Scott tells me, is the freedom and opportunity to work with like-minded people, who he continues to work with today.

Sustainability is something that is increasingly questioned in the fashion industry. I ask Scott how DEN is trying to ensure that it doesn’t become another fashion label negatively contributing to the environment. “I think we’re all very clear on the fact that sustainability and the protection of the planet is one of the most important things we’re facing right now,” he replies, acknowledging that the fashion industry is one of the biggest polluters.

Through DEN, Scott sees an opportunity to do something about that. “By giving the customer a product that’s going to have a long life and that they’re going to love, we’re ensuring that they’re going to wear again and again. It won’t become just another disposable item in their wardrobe.” To achieve this, he has worked with manufacturers to engineer fabrics that are tougher and will last longer. He has also developed poppers that are hardwearing, to make sure they don’t fall off.

And if a popper comes off or the seam starts to come undone, Scott says customers can email him and he will get it repaired for them. “I don’t want people to just throw the product away. If we can fix it, we will. I think that’s another little step that we can take to make our product more sustainable and help the environment.”

RELATED ARTICLE  Poems for Your Fridge: 'Exit Only' by Caleb Parkin

Whilst authenticity is an important value for Scott’s business, inclusivity is equally close to his heart. When I ask him about how he has tried to create a product that is inclusive of different body shapes and sizes, he tells me that this has been one of the most difficult things to get right. “Making sure that it’s as accessible to everyone as possible has been tricky from a technical point of view, but it’s been important for us to do it,” says Scott.

When he first started DEN, he had a limited budget and the garments were not always able to accommodate all body sizes. But having listened to customer feedback, as well as growing the business, Scott has increased DEN’s offering. “Showing the variety of people who can wear our product has been very important to us and and I think it’s been shown through through our social media campaigns.”

Looking to the future, it seems to me that Scott is keen to grow his business, but not at the expense of losing the human touch that he has with his customers today. As well as writing notes to them, Scott manages DEN’s social media accounts, and replies to any emails from customers himself. He does this alongside a full-time job, juggling his business commitments in the evenings and weekends. “It’s getting to the point now where I’d like to grown further, but it’s still my little baby,” he tells me.

It seems evident to me that preserving the authenticity of DEN is ultimately the most important thing for Scott. “I like to think that people who are buying it see that it’s me, it’s Mark, it’s us. DEN is a queer brand that is queer, managed and owned. People know that they are getting with us when the buy a DEN product.”

Scott adds, “I’m in no rush to over-expand the business, because it’s important to me that it’s always DEN.” 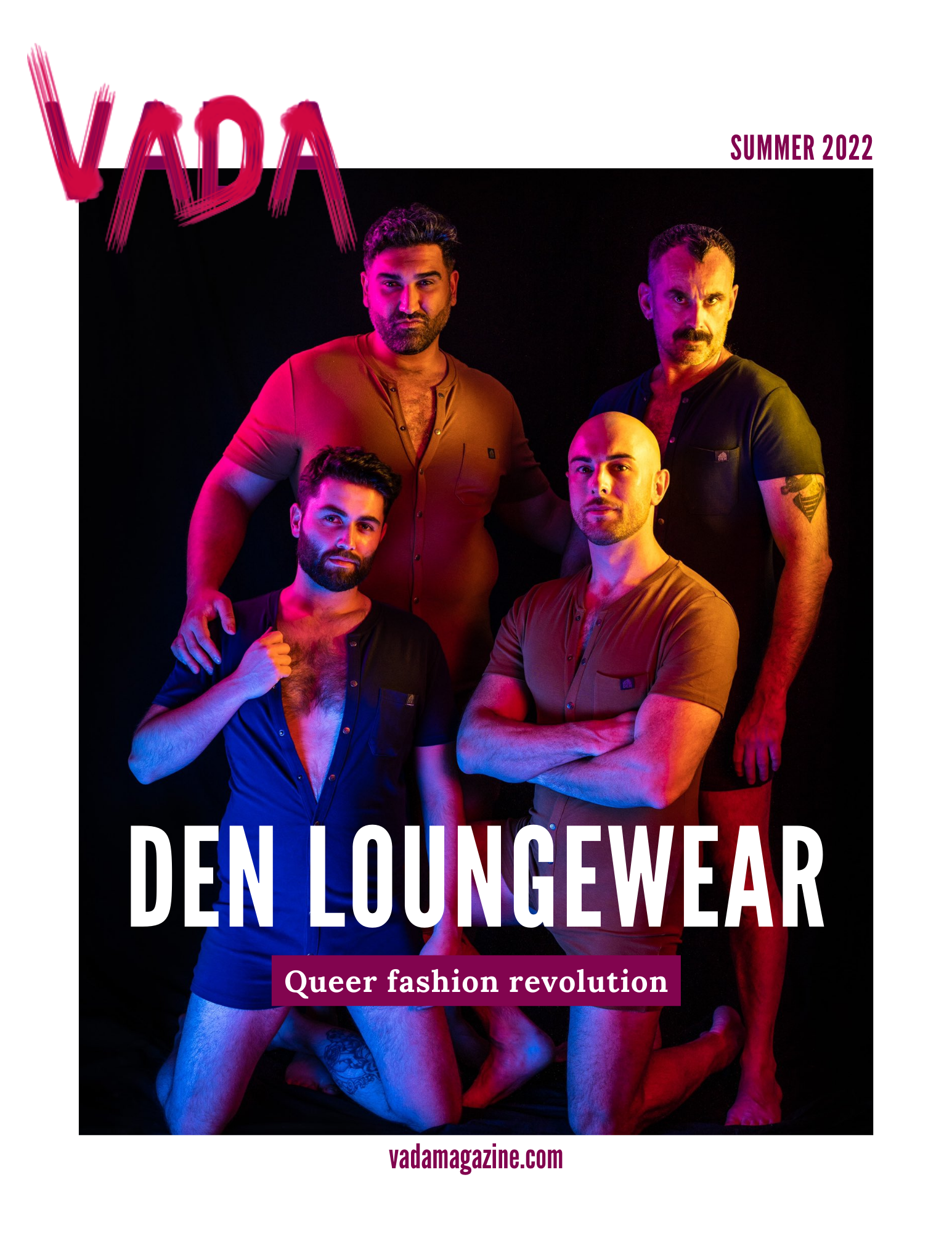