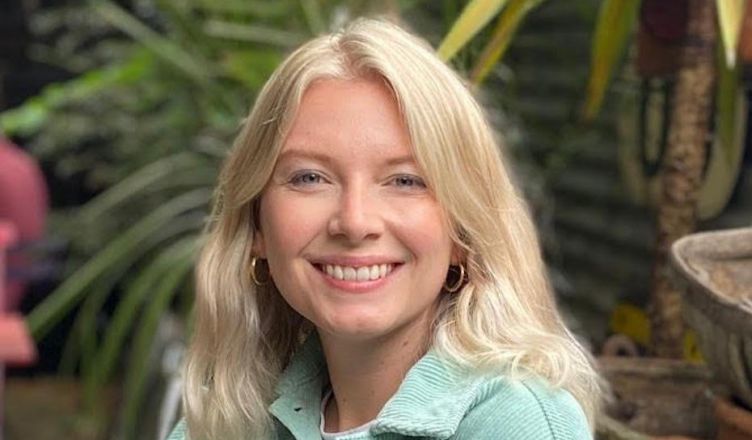 The readers of Laura Kay’s debut novel The Split don’t just have a crush on the book, they’re in love with it. Vada Magazine caught up with Kay to talk about break-ups, the hills of Sheffield, and queer friendships.

Having spent an hour with Laura Kay, perched across from her at a table in the East Village’s Signorelli bakery, I feel like we’ve covered a lot. In addition to talking about The Split, we have exchanged stories about workplace dynamics, and talked about the latest news on mask-wearing – Kay tells me she will continue to wear hers.

But perhaps most importantly, we’ve established that we are both fans of Sophie Kinsella. “I love her,” she says of the fellow funny author. Kay listens to me, her eyes wide, as I recall the time I happened to be in Geneva at the same time as Kinsella, who was giving a reading at a book festival.

“Oh my God, that’s brilliant!” she laughs when I describe how I almost elbowed someone out of the way to get to Kinsella, ask her for writing advice, and take a quick selfie.

On the day of our interview, however, I’m not elbowing anyone. Kay arrives during what she tells me feels like “a long weekend”, having just departed from her full-time job at a national newspaper days before our meeting. “Let’s see how it goes,” she says of her plans to write full-time for a while, “It hasn’t really sunk it yet.”

Her debut novel The Split tells the story of Ally, who has just split up with Emily, and retreated back home to Sheffield. Here, Ally reconnects with her father, friends and a city that is close to the Kay’s heart. She’s also taken Emily’s cat, Malcolm, with her. Because, why not?

“I think it depends on who you ask,” replies Kay when I begin by asking her if there’s such thing as a good break-up. “Mostly break-ups are not good. I don’t know why, because it’s such a human thing that most people go through, but I would say from experience and hearing other people talk about it, we do really need to learn how to do it better.”

It turns out that the break-up between Ally and Emily wasn’t what Kay had initially thought about, when she penned the first version of the novel. The characters of Ally and her friend Jeremy came to her first.

Kay began writing the book aged 28, and recalls being particularly interested in exploring this time period for people coming towards the end of their twenties and entering their thirties.

“People are either deciding to stick to something that they’ve committed to during their twenties, be that a career or person, or it’s that time when you break free and go into something completely different,” she argues.

“Also as queer people, I think there’s a lot of things that happen later for people. I think we’re not necessarily put in a box, and people don’t expect certain things from us, so we can take our time and make up our own rules. Which can be terrifying, but very freeing in other ways.”

Jeremy’s character is pivotal for Kay, because of the important role gay men play in her life. Her friendship group, she shares, is “a bunch of lesbians, a bunch of gay men, and a couple of bi people.”

But it’s a social circle that she says is seldom represented in media or publishing. “Sure, we see a gay guy being friends with a straight woman, or lesbians being friends with other lesbians, but that’s it. I really wanted to reflect those dynamics, and I knew that writing the relationship between Ally and Jeremy would be fun too.”

The Split began its journey during Penguin Random House UK’s mentoring scheme, WriteNow. Kay had seen the call for submissions on Twitter, two days before the closing date. She sent off 1,000 words, ended up being selected, and embarked on a year-long pairing with a Penguin editor. But by the end of that year, the book had ended up being rejected by the publishing house.

“That was the first big rejection,” Kay recalls. “And it was really tough.”

Yet Kay wasn’t ready to shelve her manuscript. Thanks to the WriteNow scheme, Kay had found herself an agent, who immediately began putting the book out for submission. The book’s initial title of Malcolm was rejected by all the publishers. “God, I fought for that title,” Kay sighs. They eventually agreed on a “more commercial” name, The Split.

Although she has always enjoyed writing, Kay admits that becoming an author seemed as likely as becoming an astronaut. She embarked on a law degree in Nottingham, before dropping out a week later, because she hated it. Kay took a year out, and then began a history degree at The University of Sheffield.

“I was fine at it,” she says of her degree. “I was definitely there for the fun, and the work came secondary, until my final year.”

She received the Sir Ian Kershaw Dissertation Prize, which Kay describes as “a total fluke” and saw her taking the decision to continue her studies at Sheffield, where she earned a Masters in American History. “I don’t think I’ve retained any information,” she admits. “Something about the Vietnam War maybe?”

Whilst her subject knowledge might not have stayed with her, Kay’s memories of the six years she lived in Sheffield clearly have. The city’s importance in The Split is clear: its character, and its hills.

“I knew that I wanted to write about running and I wanted it to be funny,” she explains. “Sheffield is really hilly. It’s a horrendous city if you want to run.”

Ally and Jeremy make a plan to take up running, with varying degrees of success.

Was Kay running when she lived in Sheffield, I venture. “Depending on where I lived,” she replies. “I lived in six houses, in six years. If there was a nice flat route nearby, then I would run. Otherwise, I wouldn’t.”

Kay tells me about the year she lived in a house that was on such a steep hill, it had a handrail outside that she would pull herself up on. I begin to picture Kay rolling down a hill, as she recalls the practical struggles this house inflicted on her life.

“I mean, I just wouldn’t leave the house if I didn’t have to,” she says. “Trying to get back up that hill was horrendous.”

As for running the Sheffield half marathon, Kay’s wife put her off that. She ended the race hysterically crying, unable to speak for 10 minutes.

When it comes to the representation of LGBTQ+ people in fiction, Kay agrees it is important. Yet she admits it wasn’t a conscious decision to write about a queer love story and queer friends; it was what came to her.

“I love reading books about LGBTQ+ characters,” Kay tells me. “It’s become more important to me actually, now that the book is out, because people get in touch with me pretty much every day saying how they’d wished they had read this book as a teenager, or the importance of seeing themselves represented on the page.”

It had never fully occurred to Kay, she admits naively, that the book would have such an impact on queer readers.

As well as the book’s representation of LGBTQ+ people, readers have also commented on Kay’s hilarious writing style. I admit to her that I think I struggle to write funny. “I don’t believe you that you can’t write funny, because you are a really funny person,” she replies. “Your humour is so quick.”

The Split wasn’t intended to be funny, Kay shares; she just wrote in the voice that came naturally to her. In fact, it was her editor at Penguin that said the book was really funny.

“It would be an effort for me to write something that is deadly serious, it would feel almost forced,” she says.

That being said, there are slightly more serious elements to the book too. Jeremy’s depression, and his conversation with Ally about it, opens up a dialogue about mental health and emotional well-being. Whilst Kay says that there isn’t much of her in the characters, the exploration of anxiety and depression is part of her experience.

“I also wanted to write about it alongside running, because I run to make my head feel better,” she shares. “But it doesn’t cure me. I think there’s a lot of misconceptions about how exercise can make everything better. It can help people, no doubt about it, but I wanted Ally and Jeremy to have this quite frank conversation about what it feels like to have depression, in order to educate the reader about it.”

There is a second book coming next summer. Kay wrote it during the first lockdown, spending five hours per day over four months, to finish a “very rough” first stab at the novel. It is not a sequel, despite readers asking for one.

“Everyone is super queer,” she begins. “Actually, there is a straight best friend. It’s set in Brighton. The main character is a therapist, and there’s some dysfunctional family issues going on, and some travel.”

The second lockdown, Kay tells me, broke her. But she is now enjoying that things have started opening up again, and she is able to finish editing the second novel away from home.

“This next book feels like something that speaks to me, and where I am now. I’m so excited for people to read it.”

The Split by Laura Kay is available for purchase now.