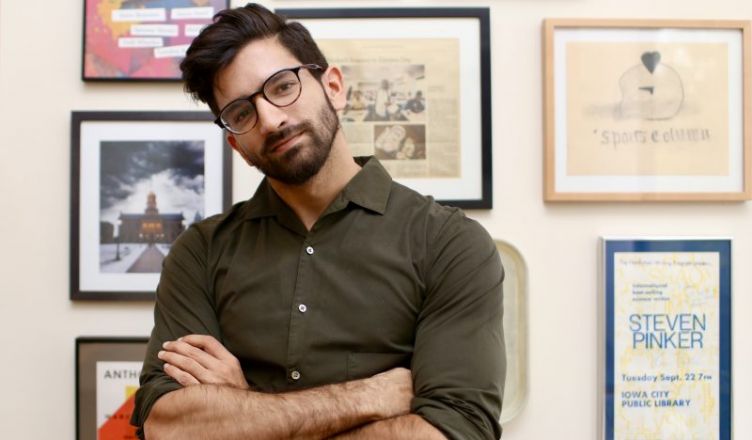 Krishnanand Kelkar wants to help people find love. As a data scientist at a dating app, Vada Magazine was pleased to catch up with him last month, to talk about how apps use our personal data, his career path, and the future of dating.

Having found love thanks to a dating app, it’s perhaps unsurprising that Krishnanand Kelkar truly believes in the power that these apps can have on people’s lives. “I met my boyfriend on a dating app. For me, this just feels like the way of the future and how people are going to meet others. I feel lucky to be working on a product that is ultimately helping people making these connections,” the data scientist tells me over video call, from his home in Brooklyn. Our interview takes place against a backdrop of a pandemic putting a halt to conventional dating, conversations about the way companies are using our personal data, and changes at the White House – topics Kelkar is all too familiar with.

Kelkar’s career began at Brown University, where he studied International Relations and dreamt of joining the United States Foreign Service. His plans changed, having found a knack for data, which saw him working for the likes of BuzzFeed and HuffPost, before landing in his current role at a leading dating app in the United States.

“I started in media, and worked for a startup, which was my first opportunity to work for a consumer tech product. I really liked seeing how using data can be leverage to inform new innovations,” Kelkar recalls. “Dating apps are certainly interesting from a data point of view, and the product is something that is a little bit more tangible to my life; I understand how it influences other people’s life, having used them in the past. It also certainly reflected my own interests of wanting to work on a consumer tech product.”

A data scientist’s job description varies depending on where they work, with Kelkar describing himself as being a “Jack of trades” when it comes to data. There are three avenues that he focuses on: data engineering, data analysis and machine learning. “The bulk of data engineering is ETL – extraction, transformation and loading. Basically, it is taking data from one source (extraction), making any necessary manipulations (transformation), and putting it into a repository accessible to others (loading),” explains Kelkar. “Data analysis is usually quick arithmetic and statistical manipulation of data for insights and discovery. Think of sum, averages, and medians cut by key cohorts, such as gender splits, geographical splits, intervals of time. An important part of successful data analysis is taking derived metrics and telling a story with them through charts and data visualisations.”

Kelkar continues, “Machine learning is the application of powerful statistics and computer algorithms on training data in order to predict outcomes. An example of machine learning at work, is the section of recommended articles at the bottom of a newspage. Machine learning has many applications and can be used to shape product experience or in ways to support analysis.” His role also sees him liaising with colleagues from different areas of the company. “I work with product managers, people in finance, and designers and try to give them the most insights that they need to effectively do their jobs, based on the data from our users.”

We’re becoming more aware of data, how it can influence our lives, and how companies share and protect our personal data. When I put this to Kelkar, he agrees that data protection is something that users may be concerned about. “I think people are certainly more literate about data and how it is being used. Personally, in my role, I cannot identify any single user. I can’t read message texts, I don’t know a user’s name, or any other person identifiable information. Legally, we can’t access that.” Kelkar also acknowledges the concerns that some users might have about how their data is used. “Data at its worst, can certainly be used to harm; it can be used as a way to manipulate a user’s behaviour. Data at its best, however, can be really helpful. We want our users to match and connect with other users, which is our primary goal.”

Kelkar argues that the anonymised data that is collected from users allows the app to measure the success of its product, make changes, and enable a more positive user experience. “On a dating app, there is that reciprocity element to the product. Let’s say we get messages going up from users, but if none of the messages are getting responded to, then it’s a bad thing,” he explains. “For us, we have a series of metrics for success that we care about. The number one for us, is conversations between users, and we are able to track if a contact has been exchanged in the conversation thread. So that could be a telephone number, or a social media handle or email address.” This suggests that users are taking their conversation off the app, and meeting up on a date. “We really want to get people off the app, and getting them talking in real life,” says Kelkar.

Not everyone is successful on dating apps, I venture. “We are the most cited dating app in the New York Times wedding section, so we know that people are being successful on our app, and interacting off the app,” he laughs. “But I can appreciate that there are people who can become frustrated with using dating apps, and perhaps even find themselves being subjected to inappropriate behaviour,” Kelkar reasons. “We do have systems in place to ensure that if people are using the app inappropriately or engaging in harassment, our product team try to the best of their ability to prevent these behaviours.” Kelkar also tells me that apps are constantly exploring ways of moving beyond the traditional text-based messaging format, in an attempt to enable more authentic ways of communicating with other users. “We are also looking at ways of improving the calibre of interaction on the app, so not only sending messages, but also having video chat feature on the app.”

As a company, Kelkar says that his workplace culture is extremely accepting of LGBTQ+ people. Being ‘out’ in the workplace is something that queer people worry about when starting out in their careers. Has this always been the case for him? “I will say that I’ve been very lucky, it’s always been a positive experience for me,” recalls Kelkar, having started out working in marketing for L’Oréal. “It was actually more of a lesson about how women were being discriminated in the workplace, rather than LGBTQ+ people,” he shares. “There were times that I felt that my authority was respected more that colleagues of mine who were women, even though they were more senior than me. Since then, and throughout my career, I’ve always worked at companies that have been LGBTQ+ friendly.”

This decision to work for LGBTQ+ friendly organisations is something that Kelkar took early on in his career. “I went to university, thinking that I wanted to be in the Foreign Service. I came out at Brown and started to think about my future,” says Kelkar. “At that time, it was the first term of the Obama administration, who actually was only pro-gay marriage during his second campaign run. I had known that Federal Government employees didn’t get benefits extended to domestic partners or non-traditional families. Moreover, if you were to work in a branch like the Foreign Service, you have to do your job irrespective of who the executive is.” The prospect of working for future administrations, and potentially implementing policies, that went against what he believed in, was enough to deter Kelkar from this career path.

That said, it didn’t take him away from politics and wanting to make a difference. “From there, I started doing local political stuff and LGBTQ+ activism. I found my knack for data and analysis, and soon realised that people who use data effectively are the people who get to be next to the decision-makers, and help influence those decision. “I thought that would be such an empowering role to be in as a young employee.”

The future of dating seems to be evermore focused on dating apps, with the pandemic forcing us to rely more heavily on tech to communicate with others. Kelkar agrees that his app is seeing a spike in the number of users and interactions between users, since the start of the pandemic. “There is certainly a reason why people are more comfortable nowadays to meet people on dating apps, rather than in real life. This is something that is happening across the globe. We started with Facebook, and now it’s Instagram and video messaging apps. Not only are we evolving the way we communicate digitally, but I think it is becoming so much more ingrained with the way we communicate with other people. Dating apps are just responding to that trend.”

For queer people, these apps also play an important role in our lives. “Particularly for the LGBTQ+ community, dating apps are a huge benefit,” adds Kelkar. “You get to self-identify, you can limit who sees your profile and who you see. You can only see queer people, who understand your life experience. It’s also helpful for people who are perhaps isolated and don’t know any other LGBTQ+ people. Ultimately it’s a great way to connect with other people, when they might not get those opportunity in real life.”

Kelkar concludes that he believes dating apps facilitate LGBTQ+ people to rebel against the status quo of the societal norms of dating. “I think also as LGBTQ+ people, the traditional systems of dating for the white cis-gendered man and woman couple, aren’t always set up for us. I think especially as queer people, we should always be questioning whether or not societal norms are the proper mode for us to navigate our queer lives, and I think dating apps do now play an important role in that.”

Krishnanand Kelkar can be found on Twitter and Instagram, where he posts about pop culture, politics and all things LGBTQ+.