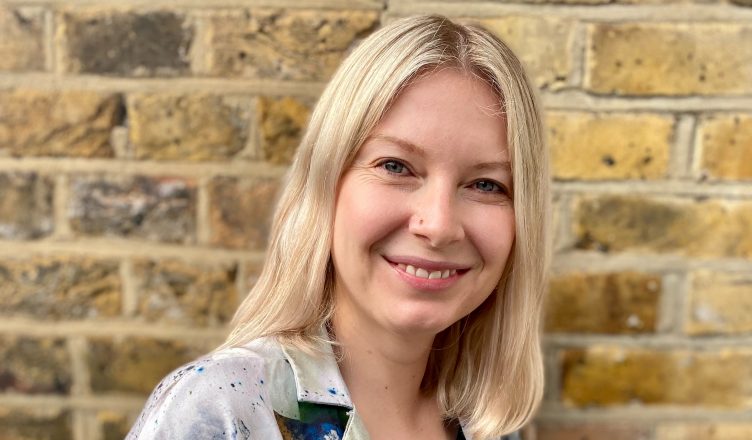 Having penned The Split which was published in 2021 to critical acclaim, author Laura Kay returns with her second novel, Tell Me Everything. The queen of queer rom-com sat down with Vada Magazine to tell us everything about the importance of queer representation in fiction, her writing process, and the impact of shame.

Laura Kay admits she is the worst when it comes to talking about her books. “This interview is just going to be full of spoilers,” she laughs on Zoom, with her camera turned off. When I ask her about this, she tells me that she doesn’t want to be distracted when talking to me about the book. “I can’t bare it,” she says of seeing herself on a video call. “I’m going to end up looking at myself the whole time, when I’d rather just focus on you and your questions.”

As readers open the first pages of Tell Me Everything, they meet protagonist Natasha, living with her ex-girlfriend and working as a therapist in Brighton. Kay tells me that she happens to know a number of therapists, and has always been fascinated by knowing what happens in their real lives outside of the therapy room.

“I thought it might be an interesting concept to explore,” she says of the dynamics between a therapist and their client, compared with how a therapist might behave when it comes to confronting their own relationships among family and friends. Something which Kay argues is rarely seen in the rom-com space.

“I did do a lot of research,” adds Kay. “Especially because there are client sessions in the book. I got some of my therapist friends to proof read those scenes, just in case I was going wildly off topic.”

When writing about the therapists in this book, I wonder if Kay was also attempting to change the perception of therapy for her readers. “The common experience of accessing therapy is through the NHS, where you might get offered CBT or group therapy sessions,” explains Kay. “And for some people it works, but it is very much a one approach fits all. In the book, however, the therapists are offering talking therapy, which is expensive, yet centres around the client and their individual needs.”

In fact, Kay brings up the notion of there being a financial barrier when it comes to accessing talking therapies in the UK. Natasha charges her clients different fees based on their income.  Kay argues that whilst this isn’t a perfect solution, there are a growing number of therapists engaging in this practice to help widen the number of people able to access therapy.

Kay also wanted to break down the idea of who a stereotypical therapists might be. “That type of softly spoken, extremely posh woman, is what people tend to think about when they think of therapy,” she says. “But there are therapists out there that do share different experiences, like Natasha and Charlie. And yeah, maybe the book will open people’s eyes who previously thought therapy wasn’t for them, which would be great.”

Unlike with her first novel, which is mostly set in Sheffield, where Kay attended university, she has never lived in Brighton. “We did come dangerously close to buying a place in Brighton actually,” she recalls. “But one of my oldest friends has lived there for maybe thirteen years, plus having lived in London and the surrounding area, Brighton has always been by go-to seaside.” Plus with a friendship group of queer therapists, Kay argues that “Brighton just made a lot of sense” as a setting for the book.

Speaking of the queer characters in Tell Me Everything, why is it important for Kay to write about LGBTQ+ people in her fiction? “Honestly, first and foremost, I am just writing about what comes naturally,” she replies. As an author who starts by thinking of characters first, and then builds the plot around them, Kay tells me that queer characters are what pop into her head. “It feels quite natural that my protagonist is a queer woman, because I’m a queer woman. And that she has queer friends, because I have queer friends.”

Kay remarks that often whenever queer characters are brought into a plot, often written by straight writers, they exist in isolation or amongst a group of straight friends. “That’s just not my experience. Of course, I have straight friends and… I love them dearly!” she laughs. “But my circle of people are queer. So it makes sense to me that you don’t just have one queer character, you have a community of queer characters, because we gravitate towards each other through our shared experiences.”

One of the characters in the book, Charlie, uses the pronouns “they” and “them”, yet Kay doesn’t at any point label their sexuality or gender identity for the reader. I wonder, was that a conscious choice on her part? “I knew that it made sense for their to be somebody who uses they/them pronouns in this friendship,” replies Kay. “It was never really a conscious decision not to bring up their gender or sexuality, and at no point in the book did it feel naturally for me to be like, this is a teachable moment and let’s talk about this character.”

Kay tells me it didn’t feel right for her to interrupt the story in that way. “Charlie’s just living their life, dating, being great at their career, and being a great friend. I love their relationship with Natasha and the role they occupy in the book. It didn’t even occur to me until people pointed it out that it’s not really brought up who they are in that way. I’m really glad that I didn’t, otherwise I fear it would have felt forced.”

On that note, Kay tells me that every time she sees a book or TV series featuring queer characters, she devours it. “Because I feel like it’s still so lacking,” she replies when I ask why. “I’m also making up for several years where I would have read absolutely nothing that has queer characters.”

As for what she’s devouring at the moment, Kay has just finished the second series of Gentleman Jack, the historical TV drama created by Sally Wainwright, starring Suranne Jones. “I just don’t like it,” she laughs. “I’m sure, objectively, it’s a brilliant series. The script it fantastic, it’s brilliantly shot, and I’m obsessed with the actors that are in it. But it’s just not for me. Yet I’m still going to watch it, because there’s just not enough shows about queer characters.”

Kay and I begin to talk about the many complex relationships in the book, something which she says she loved writing about.

“Almost everything exists in this grey area,” reasons Kay. “Somebody can be your best friend, but there can still be so much underneath that’s going on, and that’s what I wanted to explore. I think it’s important that Natasha was grounded in some people: her and charlie’s relationship isn’t complex, her and her sister’s relationship isn’t complex. She can really rely on those people and that’s great, otherwise I’d have felt worried for her.”

When it came to writing about Natasha’s relationship with her ex-girlfriend, Kay says that she thinks that when it comes to relationships between women, they do stay friends with their exes. “Sometimes really, really good friends,” adds Kay. “I hadn’t seen that explored before, so I wanted to look into that dynamic. And then there’s Natasha and her dad… Gosh there really are some complex relationships in this book!”

Alongside the complex relationships with others, Natasha is also confronted with the realities of the relationship she has with herself. Unlike in her debut The Split, Kay has opted to delve into the notion of shame in this book.

“I think I shied away a lot about writing about any kind of shame or trauma associated with sexuality, as it wasn’t part of my first book’s story,” says Kay when I bring this up. “I know that was great for a lot of people who read The Split, but I also think it’s possible to write about a character who is living a really successful life, surrounded by queer people and a loving family, and still be carrying shame. Internalised homophobia is incredibly common, and it can have a huge impact your life.”

Kay doesn’t want to share what’s next for her, well, not yet. But looking to the future, Kay says that she is looking forward to helping future queer authors break into the publishing world. As somebody who also benefited from a mentoring scheme when she was starting out, having been selected to be part of Penguin Random House UK’s mentoring scheme, WriteNow, Kay will be mentoring on the Curtis Brown Breakthrough Mentoring Program for LGBTQIA+ Writers.

“I think that queer people, especially queer people of colour and trans people, the publishing industry can feel so closed off and to get a foot in the door is really difficult,” Kay says of the importance of mentoring programs. “What’s more, to occupy a space that doesn’t feel like it is for you, can be really difficult.”

Kay adds, “I also came through a writing scheme, and it did offer me this huge leg up. To do that for someone else would be amazing.” 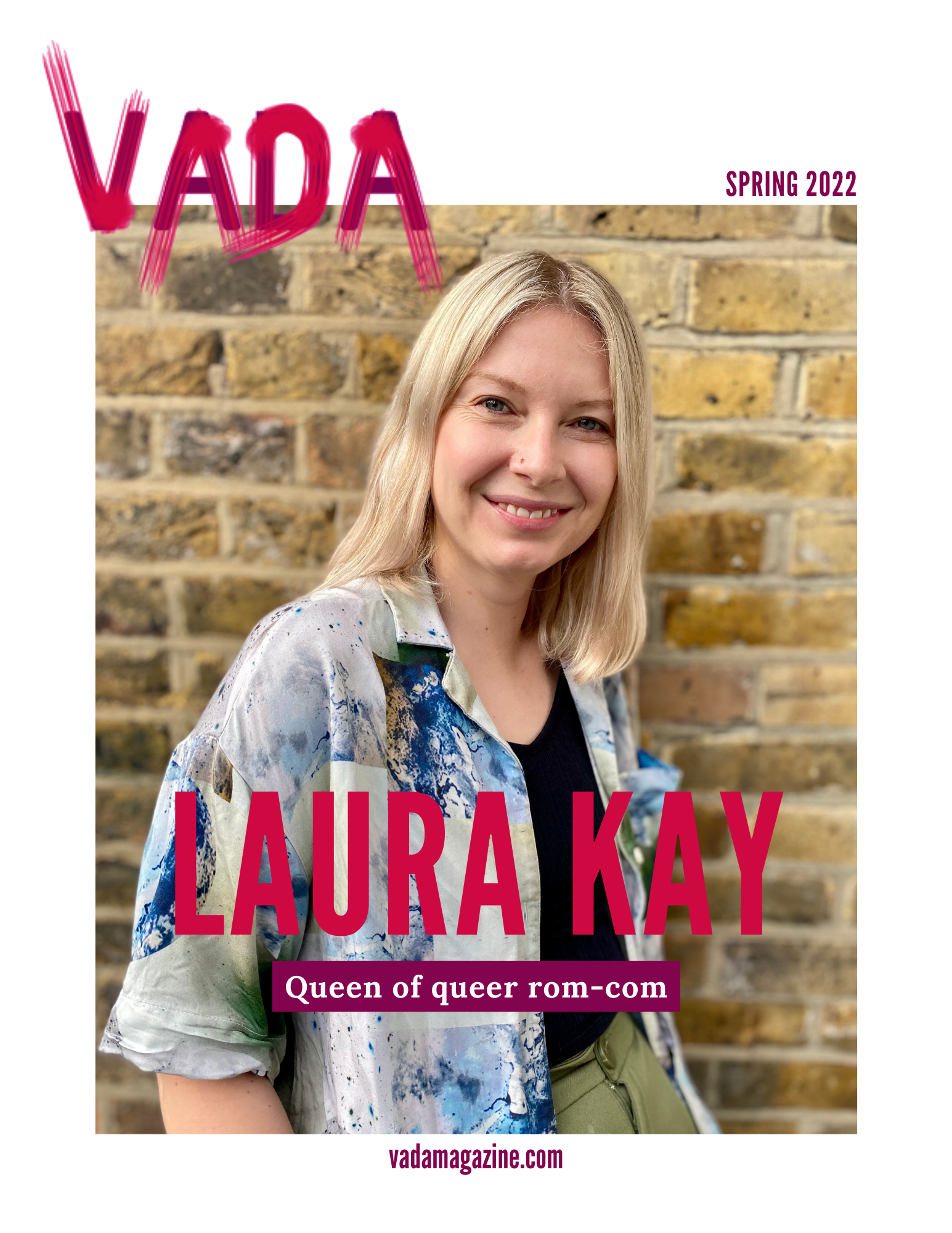 Laura Kay is an author and journalist living in East London. Her debut novel The Split was published by Quercus in 2021. Tell Me Everything, her second novel, will be published in May 2022. Kay features on Vada Magazine’s spring cover, photographed by JLT.