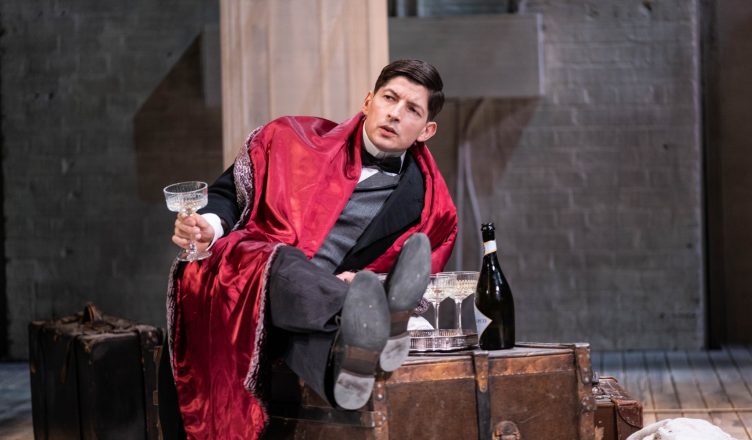 Lee Knight has just finished an exhausting run of Hamlet and The Cherry Orchard at Windor’s Theatre Royal when he sits down for an interview with Vada Magazine. He reflects on the unique experience of working with Sir Ian McKellen during a pandemic, appearing on a TV advert with his boyfriend, and how he wants to help the next generation of actors to get into the industry.

The second thing that Lee Knight says to me, after asking how I am is, “Are you recording the video or just the audio from this interview?” It is the tail end of 2021 and we are speaking on Zoom. The actor, he explains, is worried about his appearance. After such a busy schedule, you would forgive him for looking a little tired, yet he looks more rested than me. Just the audio, I reply. “Oh thank God,” he laughs. And with that, the interview can begin.

Knight has just finished playing Yasha in Anton Chekhov’s The Cherry Orchard, alongside Sir Ian McKellen, at the the Theatre Royal in Windsor. A fan of Chekhov, The Seagull being one of Knight’s favourite plays, he tells me that The Cherry Orchard was one of the plays he was less familiar with. “I haven’t done one of Chekhov’s plays since drama school,” says Knight. “Plus my character was formidable to play. It was a great experience.”

Said experience was made all more intense by the fact Knight was rehearsing for The Cherry Orchard, whilst also performing in Shakespeare’s Hamlet, which began rehearsing in early 2021, and arrived on the same Windsor stage in June. “I thought it was going to be exhausting,” he recalls. “But after such a long Hamlet run and then rehearsing The Cherry Orchard, it sort of kept things fresh within the company. There was a new energy, and it almost felt like two different jobs, despite it being the same company.”

Acting as part of a rep theatre company during his Hamlet and The Cherry Orchard run is something that Knight is proud of. At the time, they were the only rep company in the whole of the UK performing on stage, “Which is sad, but also quite amazing that it was during a pandemic, during the worst 2 years in our industry. We didn’t stop once for Covid.”

They even found time to shoot a movie of Hamlet, which is due to come out this year. It’s something which Knight is initially unsure if he can even talk about, before recalling that Sir Ian Mckellen tweeted about it. “So I guess I can say something about it,” he laughs. “We shot it for six weeks during lockdown, staying in a hotel in Windsor as a bubble. I can’t really say much more about the film, other than it wasn’t shot on stage, it’s an actual film.”

Speaking of Sir Ian McKellen, how was it acting on stage with him for such a long run? “I had met Ian socially a few times before, and we have quite a few mutual friends, so I wouldn’t say that I was star struck,” he replies. “However,  what was wonderful was working with him doing classical texts.”

Knight recalls one evening in Windsor where McKellen invited Knight and another actor to read lines together. “He was reading my part, and I was reading his… He is such a beautiful speaker of classical texts. I was in ore of him, and being able to work with him every night in a Shakespeare play.”

Although the pandemic didn’t put a stop to his plays in Windsor, the year before was a different story, with actors being some of the hardest hit professionals during the onset of the pandemic. For Knight, the final curtain of 2020’s lockdown came at the right time. He had just finished filming the TV series The North Water in Budapest, and the film The Last Letter From Your Lover in Spain, before returning home to London to play the lead in the play Coming Clean.

It was during this run that his dog passed away. “I was exhausted and grieving and I’m not going to lie, I quite enjoyed the first part of lockdown,” Knight recalls. “In fact, a lot of other actors said the same thing to me. I just needed some time for me. It was a nice break for a while.”

For Knight, he thinks actors were almost prepared for not being able to work during lockdown. “As actors and creatives, we learn to be very resilient early on in our careers, and we adapt to not working by finding work, or doing what we can do earn money,” he argues. “So I suppose you could say we had a head start when people were suddenly unable to go to work. I think we have other skills that we can tap into when we’re not acting.”

With more time on his hands, Knight set up The Audition Room, a website that mentors actors auditioning for drama schools. The site offers virtual classes and workshops, as well as Q&A sessions with Knight. Having been on audition panels at his old drama school for six years, Knight realised that it was here where he could help aspiring actors. “Young actors responded to me in their audition, and it’s where I realised that we could collaborate really well,” he says. “I was hugely passionate for creating a safe space for these young actors, especially in the audition room.”

The notion of an overnight success is something that Knight says is a myth. “We’ve all been through the hardship of rejection, and the energy it takes to sustain the passion you need to get somewhere in this industry. As I’ve gone on my journey, I think that knowing what it takes to succeed is where my passion for helping others who are new to the industry comes from.”

As well as mentoring and encouraging emerging actors, Knight is passionate about creating safe spaces for them. “The industry is changing slowly regarding LGBTQ+ and racial issues,” he begins. “You need to establish the right forum for people, whether you’re in a rehearsal room or TV set, by creating a safe space. I think there are a lot of things in our industry that need to be ironed out, and that needs to start out at drama schools. We have to make our industry a safe, diverse and encouraging place to be for everybody.”

The topic of diversity came up during lockdown, when Knight featured on a TV advert for BT alongside his real-life boyfriend, and fellow actor, Syrus Lowe. “Firstly, I would say we were the first real gay, diverse couple to front a mainstream British commercial,” beams Knight. “They had peppered gay people on adverts before, but it is always as part of a montage. We don’t want to be part of a montage, we’re better than a montage!”

Lockdown restrictions in the UK meant that casting directors were looking for housemates or couples – cue Knight and Lowe’s joint acting debut. The couple sat in a house with a film crew, whilst the director joined them over a speaker from Canada, and the producers from their offices in London. “It was a bit of a mad, unique experience,” says Knight.

Knight tells me the advert was mainly shown on BT Sports, something he hopes contributed to changing mindsets in a sector that continues to struggle with issues of racism and homophobia. He didn’t check social media for comments whilst the advert was out, but Knight’s friend sent him a tweet from somebody who didn’t believe interracial, same-sex couples existed.

“They said something like, ‘An actual gay, interracial couple – you expect us to think they’re real? BT you’ve gone too far,'” he recalls. On a lighter note, Knight also tells me about a tweet that suggested he didn’t even look like he liked his boyfriend, which makes Knight shrug and laugh.

Would the pair work together again? “I don’t know,” he replies. “I write, so maybe if there was something that I wrote and if it was right for him, then absolutely. Of course, if something else came up then we would think about it too.”

On that note, Knight is currently in the process of adapting his writing with the film crew he worked with when shooting in Windsor. He tells me that he did not want to act in the comedy sketches he has written, preferring to stay behind the camera producing and directing.

When I press him further about what we’re to expect from Knight in the future, he wants to keep the details to himself. He does, however, share that he has found a sex shop in London’s Oval to film in for a sketch. Another project is a short film, which Knight has written and describes it as a dark comedy, which explores the themes of age and friendship. And then there’s the movie of Hamlet, which he really can’t tell me anything more about.