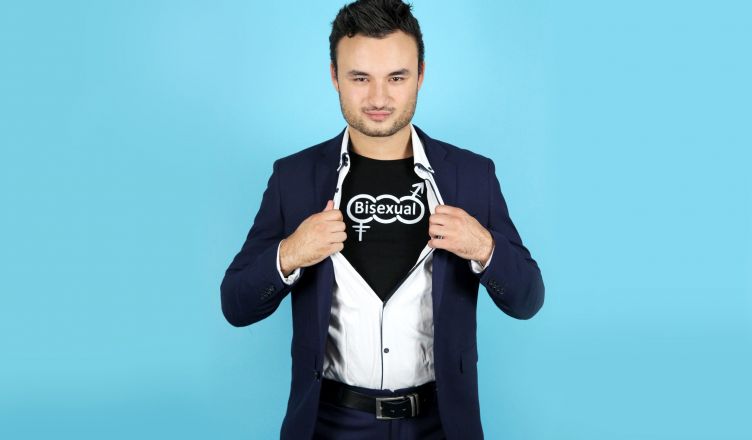 Lewis Oakley wants more people to start talking about bisexuality. An identity within the LGBT+ community that Oakley feels has been stigmatised and sometimes disregarded altogether for too long. Vada Magazine caught up with him to find out how he’s attempting to change hearts and minds.

Lewis Oakley was 19 when he moved to London, met loads of queer people, and started kissing boys in clubs, away from the gaze of his gay friends. The activist and writer, who is now arguably one of the most ‘out’ bisexual people on the internet, faced stigma from both inside and outside of the LGBT+ community when he first came out. He tells me over a Zoom call last month that, at first, he didn’t even feel comfortable talking about his bisexuality with his gay friends.

“We’d be in a gay club with my gay friends, and then I’d start kissing a guy when my friends weren’t looking, and then go home with him, without even telling any of my friends,” Oakley recalls of his early experiences on London’s gay scene. “I think it was because I wanted to figure it out for myself, before other people started to find out and putting labels on it.”

Oakley came out to his friends, and then entered a relationship with a guy that would last two and a half years. People assumed he was gay. It’s something that bisexuals face, he tells me – the stigma of bisexuality not being seen as a “valid identity” by others. He thinks this needs to change.

“For a lot of gay men, they do come out as bisexual on the road to being gay,” he argues. “And I think there is a cost to that, which is we see bisexuality as a less credible sexuality. That’s unfortunate, but then you can’t be a gay man and turn to me, saying that bisexuality is just a phase like it was for them; everyone’s experiences and journey is unique.”

It’s being on the receiving end of this form of biphobia that prompted Oakley to start writing about bisexuality. He has now written thousands of words about his experiences and opinions for several national newspapers, as well as LGBT+ publications.

Oakley believes that the lack of visibility of bisexuality as an identity poses a challenge for those attempting to dissolve this stigma. “It’s almost invisible,” he explains. “When I was walking down the street holding hands with my ex-boyfriend, people would think we were a gay couple. When I was down the street now with my fiancée, they think we’re a straight couple. There’s never anything visually identifying.”

The LGBTQ+ community could be doing more to help this, Oakley tells me. He argues that bisexuals aren’t getting a seat at the decision-making table within LGBTQ+ organisations, groups or events.

“You know, bisexuals receive the most stigma in LGBT+ spaces. So when LGBT+ organisations are making decisions about funding or projects, there aren’t any bisexuals there to advocate for our issues.”

Having a greater awareness of bi-specific issues is another thing that Oakley feels LGBT+ groups could be focusing on. He describes the “struggle of living between two cultures”, moving between gay and heterosexual cultures as a bisexual man, and the isolation that can come from this. Now that he is in a long-term relationship with a woman, I ask him if his relationship with his own identity has changed.

“That’s an interesting question,” he replies. “Day to day, I’m around less LGBT+ people. I have a fiancée and two kids; there’s not much time to go clubbing or going to LGBT+ events. Maybe it makes me overcompensate a little bit, which makes me want to be a bit more involved in LGBT+ issues.”

Oakley also says that he doesn’t want to be “defined” by his relationships. In fact, he shares that dating his now fiancée was what motivated him to come out to wider family members.

“I suddenly realised that if I don’t tell them now, they’re going to see me in this straight-facing relationship, and they’re never going to know.”

Not only is Oakley navigating the space between gay and heterosexual cultures, he has also faced cultural barriers when it came to his Jamaican heritage. Whilst he has previously written about how he felt mostly shielded from racism during his formative years, Oakley tells me about a trip he had planned with his grandfather to visit Jamaica – a country with a poor LGBT+ rights record. The trip fell through when certain members of his family expressed concerns.

“Because people can google me and see that I’m bisexual, they said I shouldn’t go,” Oakley recalls. “I never really thought that coming out as bisexual so publicly would prevent me from going to visit my heritage.”

Speaking of being publicly “out”, how has he dealt with social media and comments about his articles?

“Personally, I don’t really like social media to be honest. I’ve found it to be a really negative place.” Oakley says he has received negative comments on social media from people within and outside of the LGBT+ community. Even some bisexual groups have taken issue with some of his opinion pieces.

“It’s really disheartening, because I’m trying to stick up for bisexuals and then other bisexuals are criticising me for it.”

Oakley also fears that by having such a presence online, he is becoming less relatable to other bisexuals who might be feeling isolated. “I think you can get sucked into what the LGBT+ community is talking about. I’ve sort of removed myself from it a little bit, and deliberately so.

“I don’t know what the current LGBT+ influencers are talking about at the moment. I just want to focus on replying to the messages and emails I’m getting from bisexuals asking for advice or someone to talk to.”

That’s what motivates him – the people who get in touch to say that his articles or advice have helped them in some way.

“If people didn’t get in touch to say thank you or that they’ve got questions, I wouldn’t do it. I’ve got two kids and a full time job,” he laughs. “It can be a lot sometimes.”

He says it would be ideal to live in a world where biphobia didn’t exist, but he doesn’t think we’re there yet. However, Oakley does want to equip bisexuals with the tools they need should they face prejudice and stigma.

“People just want to have things to say back to people when they come out with biphobia.”

One way he hopes to achieve this is through his podcast, Bisexual Brunch, which he co-presents with Nichi Hodgson and Ashley Byrne. It is the number one bisexual podcast in the UK, and second in the US. The long-form format of the podcast suits him, Oakley tells me.

“The reason it’s really worked is because there are three of us, and we have contrasting personalities and opinions, but we have a lot of respect for each other,” he says. “I don’t think you can sum up something like equality into a couple of characters on Twitter. At least on the podcast, we can spend half an hour, or 45 minutes, talking about it.”

So is he optimistic about what he’s trying to achieve? “Yes and no,” Oakley replies.

“I know in good conscience that I have helped people, because they’ve told me. As a wider thing, it’s too hard to tell. If I’ve annoyed people, or whether I’ve inspired people, I would hope that I’ve had some sort of an impact.”