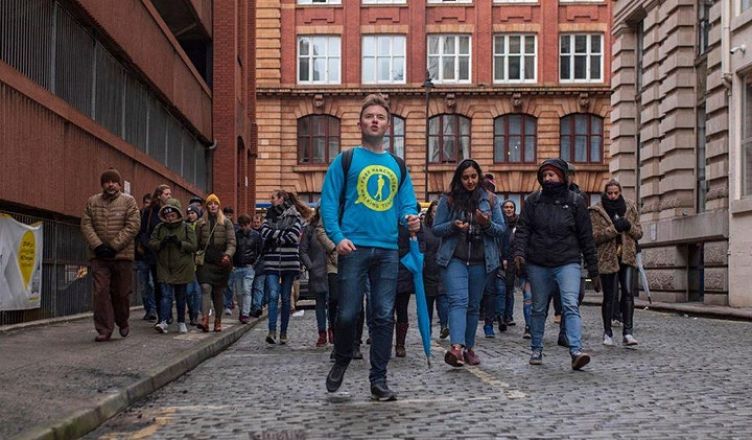 Free Manchester Walking Tours will be restarting this month, after the pandemic put a stop to tourists exploring the city’s heritage. Vada caught up with the tour’s founder, Joshua Val Martin, to discuss the importance of learning more about the queer history of Manchester, and how to get involved.

“When people think of Manchester,” Joshua Val Martin tells me over the phone, “they often think of United.”

The playwright from Bolton, who founded Free Manchester Walking Tours with a business loan seven years ago, says his job is often made easy due to many people being oblivious to the city’s rich cultural and political history.

“I think, in fairness, the city hasn’t really done itself justice in terms of promoting its history and the important roles it has played in various movements,” remarks Martin.

“When I say to people on the tour that Manchester was the first industrialised city, or the birthplace of the trade union movement, or where vegetarianism started, people look at me in amazement. That’s what makes the tours work so well; that element of shock and surprise, from people who perhaps wouldn’t view Manchester in that way.”

Martin has slowly built up a small team of tour guides, which gives him the freedom to also focus on his work as a playwright. Having trained at the Regional Theatre Young Directors Scheme at the New Vic Theatre, Martin’s play This Is Not America won the 2017 Bruntwood Prize commendation award, and he is now working on a script for a new Sky television drama.

Balancing these two parts of his life, I venture, must be sometimes challenging.

“In many ways the walking tours have been a bit of a godsend in terms of my writing,” Martin replies. “I can be quite flexible with my work, because I’ve now got other people who are also leading the tours.

“But you know, these tours are really all about storytelling, and it just feels like a natural extension from telling stories through scripts. The two really fit together quite perfectly.”

According to Martin, Free Manchester Walking Tours is the original and best-reviewed walking tour of Manchester.

“They’re a great opportunity for people to literally walk through the city’s history, and for me to share Manchester’s story with both local people, and others who might be passing through,” he tells me when I ask what people can expect when the tours restart.

“They’re free to join and there’s no pressure to tip at the end. For those that do tip, people will pay at the end of the tour what they think that experience is worth, and depending on their budgets.”

Starting at the Alan Turing Memorial in Sackville Park, a stone’s throw from the city’s Gay Village, the tours meander across the city, with stops at the Town Hall, Chinatown, University of Manchester, the Manchester Cathedral, and other notable spots.

I ask Martin about his decision to start the tour with a statue of Alan Turing, the pioneer of modern computing and prominent LGBT+ historical figure.

“In part it’s being gay myself,” he replies. “I wanted to start the tour there, because it is a part of the city that people might not go visit, if they were coming into the city centre.

“For me, the gardens where the statue sits summarise the city more than, say, St Peter’s Square does,” continues Martin.

“You’re right next to the university buildings, being such a huge university city. Then you’ve got the city’s Gay Village, which was initially a socially and economically peripheral area of the city, becoming an important gay space during the 1960s, and which later on has grown into this modern-day, thriving area of the city.”

He adds, “You could say those gardens have seen it all in terms of Manchester’s history.”

Martin argues that anybody interested in LGBT+ history should visit Manchester.

“During the time of Margaret Thatcher’s Conservative government, Manchester City Council, in part to annoy the Tories, invested a significant amount of money into the city’s gay community centre, and our local gay publication, to the benefit of the LGBT+ community.

“The city has always been at the forefront of the equality movement for LGBT+ rights.”

Whilst he acknowledges that Manchester’s history is not immune to gentrification – “There are more cranes in Manchester, than any other city in Europe,” he says – he remains optimistic about the city’s future.

“I think this is a really exciting time for the city, and I hope people who visit fall in love with it.”

Perhaps the only thing to add, is that a raincoat and umbrella are also advisable for any stroll across Manchester.

Free Manchester Walking Tours will restart on 16 April 2021, in accordance with government pandemic guidelines. For more information about how to join a tour, visit freemanchesterwalkingtours.com.

RELATED ARTICLE  Queer We Are set to hit Manchester this August

Out at Work: Alexander and William Deakin, the brothers of finance