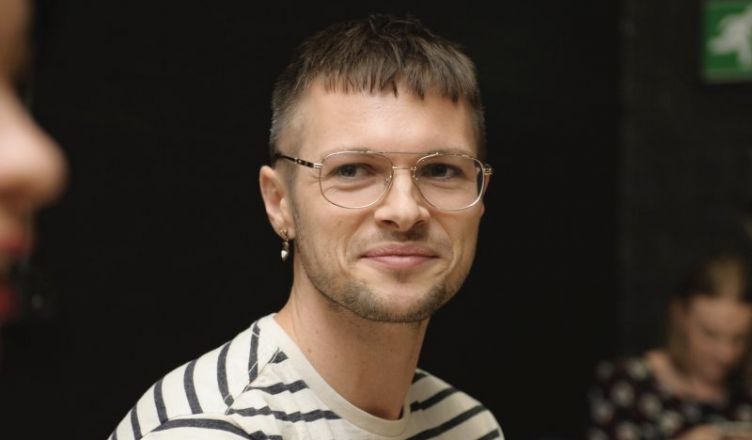 Nathaniel J Hall is an actor who has gone from writing his own one-man show, to starring in one of the most-watched TV shows of our generation. Vada Magazine spoke with him about the impact of telling the stories of those living with a virus that continues to be misunderstood.

It seems fitting to be interviewing Nathaniel J Hall on the day lockdown restrictions in England have eased; there is a sense of hope in the air.

It has been a challenging time for most of us, and Hall is no exception. On the day he was sent all five episodes of It’s A Sin to watch ahead of its release, Hall was in isolation at his parent’s house, having been exposed to the coronavirus. Hall sat in his teenage bedroom, watching the show with tears rolling down his cheeks.

The setting is perhaps more significant than at first glance. For Hall, this room is where he hid a part of himself from his parents, family and friends.

Two weeks before his seventeenth birthday, he was told that he had tested positive for HIV. It would take several years before he could feel able to tell them. Yet here he was, nearly two decades later, watching himself on the small screen, telling the stories of those who died behind doors locked by societal homophobia and stigma.

Weeks before It’s A Sin was released, I interviewed Hall about his one-man show First Time, which had just been published in paperback by the theatre publishers, Nick Hern Books. The award-winning show recounts his first sexual experience with a man, which would subsequently result in him testing positive for HIV, and the trauma and shame associated with his diagnosis.

At the time of our first interview, the actor from Stockport told me he was “playing a love interest” of a character on Russell T Davies’ latest show. Little did I know he was in fact playing the main character’s love interest, played by Olly Alexander.

Hall laughs about this when I remind him of this cryptic comment.

“Surprise!” he chimes over the phone. “We all knew that the show was going to make waves, because it was a Russell T Davies production. And we knew when we were making it that it was going to have a real impact on the LGBTQ+ community, anyone living with HIV, and anyone who knew somebody who had died of AIDS. But none of us had any idea of the wide-reaching impact that it would have.”

Many of the characters and storylines from It’s A Sin are inspired by the true stories of people Russell T Davies knew during the 1980s. Did Hall feel additional pressure to do these stories justice?

“I feel that pressure when I’m doing First Time or this show, because there is a feeling that you’re holding lots of other people’s stories,” he replies.

“We don’t often hear these stories in the mainstream, such as those about LGBT people or those living with HIV, so I think that adds a great weight of responsibility. But at the end of the day, you have to put that to one side, and try to tell the best story possible and make a great piece of drama.”

As someone who was diagnosed with HIV at a young age, Hall felt particularly moved by one of the character’s stories.

“Colin’s story resonated very closely with mine,” he tells me. “I was diagnosed at 16 following my first sexual encounter, and it got me thinking that if I’d been born during the eighties, that would have been me, that would have been my story. That was quite heavy. I suddenly felt a great sadness and a connection to those boys and to all the people who died, but those who were so, so young and had their whole lives ahead of them.”

Diagnosed in 2003, Hall says he feels as though he “just scraped the worst of the pandemic” and is also conscious of the fact that so many people across the world still don’t have access to effective HIV treatment.

“Now obviously I’m on medication and it should continue to be effective for me. But sometimes it does feel like I’m on borrowed time and i just think, make every second count,” his voice cracking. “Because I know if I didn’t have access to those medications, I wouldn’t be alive today, talking to you. That’s quite a sobering thought.”

The show hasn’t solely captured the hearts of its audience. A spike in the number of people accessing HIV testing services in the wake of the show’s release, is also something that Hall thinks the show can be proud of achieving.

“Putting emotion to one side, there is a sense of responsibility when you’re making this show to help educate and remind people about HIV testing, HIV prevention and treatment, and where to get support.”

And for Hall, the show’s success has opened up new opportunities for him.

“Doors I’d been knocking on for years are suddenly starting to open,” he tells me when I ask what the show has done for his career.

He has also just been in a Coca Cola advert, which saw him being photographed by Anaïs Gallagher, and brushing shoulders with Drag Race UK‘s Tayce. “She was lovely! We had a great chat, and she’s got legs to die for,” Hall said of meeting the drag queen.

Perhaps people can be forgiven for thinking Hall’s success equates to a more glamorous lifestyle. Just days before our interview, Hall tweeted about an article that claimed he had a “substantial net worth.”

A common misconception from people outside of the industry, Hall argues, is that the financial realities of being an actor are often masked by the glitz and glam of showbiz.

When he is not acting, he is Co-Artistic Director of Dibby Theatre, an award-winning LGBTQ+ theatre company. Alongside this, Hall also works on reception at a hair salon. A job he “absolutely loves” and an aspect of acting that he says is seldom talked about – supplementing income with jobs outside of the creative arts.

“Sometimes, especially from the tabloid press, actors can be shamed for doing other work outside of acting,” explains Hall.

“The acting industry on the surface can look really glamorous, and of course, if you’re regularly on our screens you’re going to be making a comfortable living. We’re not talking mega bucks, but you’re compensated well for your talent.

“But there can be long periods where you’re not in work at all, so it balances out across the year, and you end up needing to find other ways of paying your bills.”

Hall also acknowledges the pressures on the shoulders of actors today.

“It’s easy to see how people do burn out,” he tells me. “I’m so pleased that I’m 34, I’ve lived through my twenties, and I’ve got my head screwed on. And I’ve also got good people around me.”

Hall says that the #bekind movement, following the suicide of several reality TV stars, is something audiences need to remember.

“It can be a really tough industry. I think people need to remember that actors are human too. Sometimes people forget that and it makes it quite a difficult world to navigate.”

Turning to the future, Hall is looking forward to continuing his work for In Equal Parts, a community-led creative outreach project tackling HIV stigma and shame. As part of a number of projects, the actor will be reunited with Davies on 30 April 2021, for In Conversation With… Russell T Davies. The pair will be discussing the dramatisation of HIV for the stage and screen. Hall has also devised and directed three short films, HIV+Me, which explore the experiences of people living with HIV in Greater Manchester.

The actor also hopes to begin touring his one-man show First Time this Autumn, dependent on the pandemic. His theatre company have shows in development, he is running a course for LGBTQ+ playwrights, he has started working on a new semi-autobiographical show Toxic, and he has just signed with a new agent. Hall signs off with, “Who knows what else is on the horizon.”

Tickets for In Conversation With… Russell T Davies are now available, as part of Queer Contact 2021. All episodes of It’s A Sin can be streamed on Channel4.com.